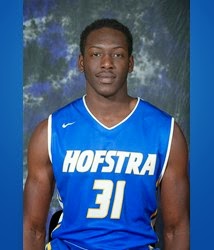 Moussa Kone was perfectly positioned to transfer from Hofstra following his sophomore season in 2012-13, a campaign in which the Flying Dutchmen plumbed the lowest depths in school history on and off the court before head coach Mo Cassara and the assistants who recruited Kone were fired.

Kone could have surveyed the landscape, found a program that wasn’t staring at a complete rebuild, used his redshirt season to refine a still-maturing game and emerged as a key force down low for someone in 2014-15 and 2015-16.

But the only time Kone thinks about transferring from Hofstra is when others ask him why he didn’t.

“I decided to stay and recognize that the coaching staff is one thing that I loved, but the Hofstra community is another thing that I love,” Kone said Monday, two days before his final regular season home game at Hofstra Arena. “That’s what I’ve really enjoyed about the whole situation. I just realized that this is the best place for me to stay.”

Kone was further emboldened after his first meeting with Joe Mihalich, the famous (or infamous) one in which the new coach gathered what was left of the 2012-13 team in a room in the basement of the University Club shortly before his introductory press conference on Apr. 10.

“He wanted me to realize that he wanted me to be a leader on and off the court,” Kone said. “That’s one thing that built my confidence up. I wanted to make him a happy coach, as far as making sure everything was correct, as far as being a good teammate on the floor, off the floor, encouraging my teammates and being energetic.”

Winning and retaining Mihalich’s approval off the court was no problem for Kone, whose character and gentle demeanor immediately impressed athletic department staffers upon his arrival in the fall of 2011. Kone evoked memories of Charles Jenkins by immersing himself in student activities—he is a member of the Student-Athlete Advocacy Committee—and becoming a staple at sporting events on campus.

Meeting Mihalich’s standards on the court was a bit more challenging—particularly handling the adjustment from Cassara, who relied on positive reinforcement to try and keep the undermanned Dutchmen afloat while they went 17-47 during Kone’s first two seasons, to the demanding and rarely satisfied Mihalich.

Kone has come back from a knee injury suffered in the season opener against Jacksonville to average 8.8 points and 5.7 rebounds in 16 CAA games for the Dutchmen, whose nine league wins are three fewer than Kone enjoyed in his first three seasons.

But winning and displaying consistent improvement—Kone averaged 5.6 points and 4.4 rebounds per game over his first three years—is often not enough for Mihalich.

“Sometimes he does look at me with a puzzled look, as if to say ‘Why do you want more? We’re doing pretty good right now.’ And he’s not used to that,” Mihalich said. “Like I said to Jeff Hathaway: This is how I want to be. We have 18 wins, knocking on the door of 20 wins, and we’re not happy.

“But that’s how you want to be. That’s the biggest adjustment for him, is that realization—he’s still learning that that’s how it’s supposed to be.”

Mihalich has spent plenty of time this month praise Kone instead of pushing him. Kone has scored in double digits three times in six February games and twice came within a rebound of a double-double.

Kone had the best game of his career on Feb. 15, when he scored 23 points—on 10-of-10 shooting from the field—and pulled down nine rebounds in an 81-57 rout of Drexel.

On the bus afterward, Mihalich informed Kone that he was just the seventh player in CAA history to make at least 10 field goal attempts without a miss in a single game. Among the first six: Hall of Famer David Robinson.

“In the beginning of the game, if they get me going with a couple dump-off passes and I get a couple dunks in and I get three or four layups and I’m feeling good about myself, then they’ll continue to feed me,” Kone said. “And that’s basically what happened against Drexel. They just kept feeding off me and I was just getting great looks and I just couldn’t miss, I guess.”

The February surge is nothing new for Kone: Of the 21 times he has scored at least 10 points in a game for Hofstra, eight have come in February including both his 20-point efforts. That’s a good trend for a team that will have a legitimate chance at advancing deep into the CAA Tournament for the first time in Kone’s career.

While Kone is thinking about the remaining games he has to play, he’s also begun to reflect upon the circuitous path he traveled at Hofstra and how the struggles of his first two seasons are impacting the payoff he’s enjoying as a senior.

“I had to mature from the first two years and being on a team where a lot of people probably wouldn’t have stuck it out,” Kone said. “But I was mature enough to be patient and just stay around, stick it out, just be confident in the team and in the organization. The athletic director down to the coaches and managers that we have on the team. I just respect them to the fullest.

“I just wanted to come out here and stick it out. Looking back on it, I just feel like it was a great decision that I (made). I wanted to come in here and finish up and it’s turned out pretty well for me.”

And as demanding as he could be of Kone, Mihalich will always have a soft spot for the lone Cassara-era player to complete his eligibility under the new coaching staff.

“The negative things that happened, the losing, all that stuff, and he’s really the only one that stuck around,” Mihalich said. “And now he’s here and not only is the culture different, but he’s a big part of why it is. So it’s remarkable that he’s been able to do that.”
Posted by Jerry Beach at 7:09 PM