Can’t afford to let it pass


Can't go with Extreme the night of Billy Joel-Extreme.

Tonight is the biggest February home basketball game the Flying Dutchmen have played in at least six years and two days, which says more for the recently downtrodden state of the Hofstra program and the disheveled nature of the CAA circa 2014-15 than it does the scope of the game.

Barone Bowl XIII isn’t even the big deal that the CAA thought it might be a few months ago, when it placed Hofstra-Northeastern on a Thursday night so that it could air on NBC Sports Network. Northeastern was picked to finish first in the preseason poll and the Dutchmen were tabbed third, but tonight’s stakes are decidedly less imposing: The Huskies are just trying to move into a two-way tie for second place with UNC Wilmington, which was picked to finish last in the preseason poll, while the Dutchmen are trying to create a four-way tie for third.

This would be a bit more compelling if there were first-round byes in the CAA Tournament at stake, as was the case when the Dutchmen put together an impressive collective effort in beating Old Dominion on Feb. 10, 2009.

But the league has dwindled from 12 teams to 10, which means the top six teams get byes instead of just the top four. Even with a loss tonight, the Dutchmen would be 7-6 and two games up on seventh-place Delaware with the tiebreaker (head-to-head sweep) in hand and three games ahead of eighth-place Towson, albeit with a head-to-head loss to the Tigers to overcome.

But let’s not look CAA contention and a nationally televised game in the mouth. I mean, our lords and saviors Cablevision didn’t even carry ESPNU in February 2009, which meant you had to be at Hofstra to actually see the game. Our lords and saviors have blessed us with NBC Sports Network, so it feels like we’re ACTUALLY gonna be on TV tonight. Which is good, since I’ll be across the street at the Coliseum and will have to watch it on tape delay (odds nobody spoils it for me?).

Plus, if it’s a big enough game for Charles Jenkins and Matt Janning to engage in a Twitter avatar bet, isn’t it big enough for us? 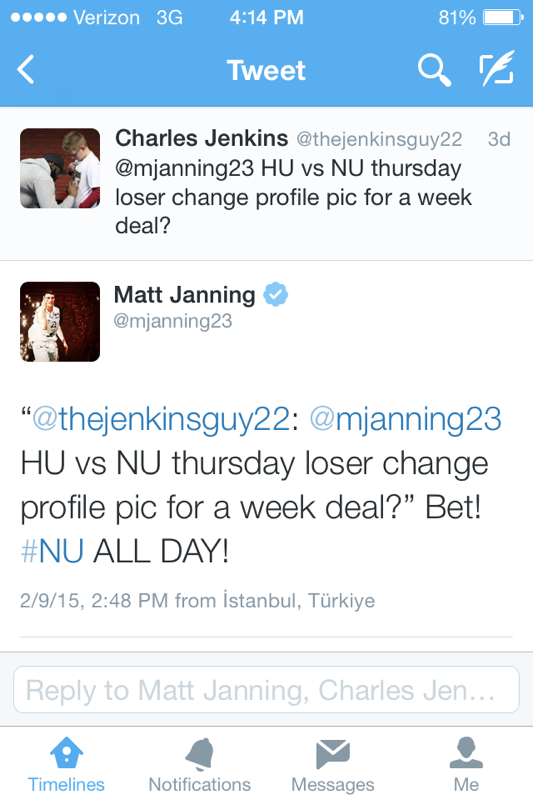 Potential statement games come in all shapes and sizes, and this is one for both teams, even if it is somewhat oblong and shrunken. The Dutchmen need a win tonight—not a well-played loss, a win—in order to prove last week’s bounce back from the most embarrassing losing streak of the Defiantly Dutch era was legitimate and not a product of beating Delaware and ninth-place Elon.

“This is our second game in February and second game that turned out the way we like it to,” Joe Mihalich said following Saturday’s 80-69 win over Elon. “So it’s a good time to be feeling good about yourself.

“They got it back, they found themselves. We kind of lost our way, but I think we found our way back.”

That remains to be seen, even if there is a lot to be said for winning the games you should win during a season in which first-place William & Mary’s three league losses have come against Delaware, Elon and last-place Charleston. Ask Northeastern, which is trying to reassert itself after Saturday’s stunning home loss to Delaware.

But in order to make a run in Baltimore, the Dutchmen will have to beat the better teams, too. Hofstra is 2-4 against the six CAA squads with winning league records, and one of those wins came against Drexel before the Dragons navigated their way out of the iceberg and became the hottest team on the planet.

It’ll be a lot easier to believe in the possibility of a magical March if the Dutchmen can beat Northeastern, which shot about 500,000% in a 91-83 win in Boston on Jan. 14. The awful defense that began cropping up against the Huskies and was a hallmark of the Dutchmen’s recent skid was better against Delaware and Elon, but still nowhere near good enough to win three games in three days. The Blue Hens and Phoenix each averaged more than 0.90 points per possession, which is the highest rate surrendered by the Dutchmen in a league win this season.

Perhaps a home crowd emboldened by free white T-shirts will generate some momentum for the Dutchmen, allow them to come out tonight like the 2008-09 team did against Old Dominion and never let up after throwing the first punch (maybe with Malik Nichols playing the role of Darren Townes?).

It is more likely, though, that an equally desperate Northeastern squad is going to respond with a flurry of its own, probably by pouring the ball inside with its three-headed monster of Quincy Ford, David Walker and Scott Eatherton. In that case, The Dutchmen will need to prove the inconsistent resiliency of January was the aberration, and not the norm, and they’ll largely need to do so by relying on strong and efficient games on both ends of the floor from big men Moussa Kone and Rokas Gustys.

Kone and Gustys seem to begin most games with two fouls apiece, but they were very good on Saturday against Elon, when the duo combined for 16 points (on 8-of-11 shooting), 11 rebounds and three blocks. Throw some Ameen Tanksley at power forward in there and the Dutchmen have a shot at minimizing Northeastern’s inside game.

The Dutchmen need to keep doing better things tonight, especially given the road trip that awaits. After visiting Drexel on Sunday, the Dutchmen head for a lousy matchup Wednesday at Towson. A loss tonight and it’s not inconceivable Hofstra is under .500 and actually fighting to avoid the Friday play-in games when it returns home to host William & Mary on Feb. 22.

But a win tonight and the long-shot regular season championship hopes stay alive, as does the possibility of gaining some revenge on William & Mary for putting up triple digits in Williamsburg during the January funk.

“We had 21 days of basketball that wasn’t great—not three months, 21 days,” Mihalich said. “We were pretty good 21 days ago, I think everybody took a deep breath, got our composure back, we got our poise back and we got that bounce in our step back.”

Tonight we find out if it’s legitimate.
Posted by Jerry Beach at 4:16 PM