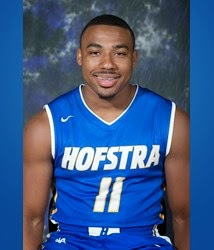 Six years, three schools and almost two degrees later, Dion Nesmith finally gets his Senior Night tonight, when the graduate senior guard will be honored prior to the Flying Dutchmen’s regular season home finale against the College of Charleston.

So what took so long? Thank the NCAA. For more reasons than one.

Nesmith originally went to Northeastern in the fall of 2009 to play football. He was redshirted as a freshman, and ended up never playing a down for the Huskies because the school dropped the program two days after the conclusion of the 2009 season.

With the understanding that he couldn’t play basketball at Northeastern, and the increasing realization he didn’t want to risk playing football for another Division I-AA program that might shutter its doors, Nesmith decided to transfer some place where he could play basketball as a true sophomore during the 2010-11 season.

Nesmith, a native of Union, N.J., went home to Monmouth. But the ever-byzantine NCAA never approved his request to play immediately, which meant he spent his sophomore year the same way he spent his freshman year: On the bench.

“The rule was if the program gets dropped, you can go right away and play that same sport again,” Nesmith said Monday afternoon. “But since I chose to play basketball, I had to sit out.”

The ruling frustrated Nesmith, but it also emboldened him.

“At the end of the day, I wanted to play more than they were going to stop me,” Nesmith said. “So there was no quit in me. I was going to play one day. I knew it was going to happen. I just had to wait my turn.”

The waiting was worth it, especially for Hofstra. Nesmith played his junior and senior seasons at Monmouth, for whom he averaged 8.4 points while starting 60 of 63 games.

After graduating with a degree in finance in the spring of 2013, Nesmith decided to cash in on his opportunity to play an extra year by transferring to Hofstra, which not only offered a master’s degree in business analytics but an immediate chance to play as many minutes as he could handle.

Nesmith was named to the all-CAA third team last year, when he averaged 13.3 points per game as the Dutchmen’s starting point guard. But his biggest victory occurred early in the season, when Hofstra applied for and received a sixth year of eligibility for Nesmith.

The NCAA helping out the little guy, and Hofstra. What were the odds?

“I never really thought it could happen, the sixth year,” Joe Mihalich said. “And then just all of a sudden one day somebody said ‘Hey you know what? This could happen.’ And it was like, wow, really? It was one of those expect the worst, hope for the best (situations). I just expected him to not be eligible and he was. So it was great.”

The extra season began with Nesmith coming off the bench thanks to the arrival of Juan’ya Green, Ameen Tanksley and Brian Bernardi, all of whom sat out last season as transfers. His post-post graduate season is ending with Nesmith back in the starting lineup and cementing himself as one of the best players on the team.

Nesmith has played at least 30 minutes 15 times this season, including in six of the last seven games, a stretch in which he is averaging 12.3 points while shooting 40 percent (14-of-35) from 3-point land.

“I never stopped working, never stopped pushing,” Nesmith said, “And to see it finally start to pay off—I wish it would have paid off the other five years, too, but I can’t do anything about it now.”

Nesmith, who drained the dramatic game-winning shot ju9st before the buzzer to beat Stony Brook in the battle for Long Island on Nov. 21, was also the player Mihalich entrusted with the ball in the final seconds Sunday. With the Dutchmen down two against William & Mary, Nesmith dribbled up the left side of the court before colliding with Terry Tarpey and uncorking an errant shot as time expired in an 80-78 loss.

“And then he turned out to be pretty good and I thin he just kept getting better. Speaks to his character. He is a high-character, total package guy.”

Mihalich likes to say that everyone will someday be working for Nesmith, who hopes to put his analytics degree to use in the sports field.

“He’ll end up being a CEO somewhere,” Mihalich said. “He’s going to be great at it.”

But before he occupies the corner office, Nesmith has a few more games to play—a few more opportunities to remind the powers that be that they might have delayed his dream of playing college basketball, but they couldn’t stop him from achieving it.