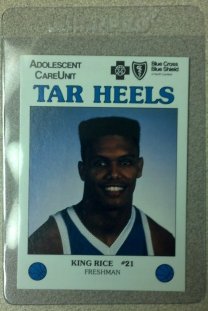 Epic flat-top for the win!

Welcome to a new feature that may or may not become a staple of Defiantly Dutch coverage. Who knows? I will explain more shortly. But there’s an hour to go before tip so there’s no time to chat!

2.) Like Hofstra, Monmouth’s pre-season preparation was drastically altered by Hurricane Sandy. Monmouth is located in West Long Branch, New Jersey, right on the Atlantic Ocean. The Hawks spent several days practicing in Scranton, PA following Sandy’s direct hit.
3.) Monmouth returns three starters from a team that went 12-20 under first-year head coach King Rice (who played collegiately at North Carolina, my pre-Hofstra favorite team, and rocked the flat-top better than anyone in the late ‘80s and early ‘90s). However, the Hawks went 10-8 in the Northeast Conference and were 12-12 following an 0-8 start.

5.) Monmouth is the first of three Northeast Conference opponents Hofstra will face this season. The Dutchmen will host Wagner on Dec. 4 and visit Long Island University on Dec. 8. Hofstra is 107-58 all-time against current NEC foes and Monmouth is the only school that has played Hofstra multiple times and has a winning record against the Dutchmen.

7.) As many as six players could make their debuts for Hofstra tonight: Sophomore Shaquille Stokes, a transfer from Hawaii, and freshmen Jordan Allen, Jimmy Hall, Dallas Anglin, Darren Payen and Kentrell Washington.
Posted by Jerry Beach at 6:49 PM