In which I tip off the season with THE GREATEST PHOTO IN THE HISTORY OF THE INTERNET (G-rated division)!!! 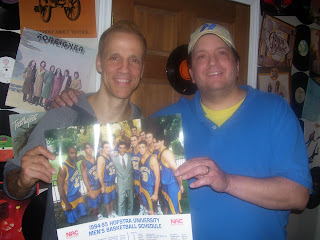 That's me and Gary Cherone. Litos is right. We have it better.
Twenty-four nights ago, a few hours after the Flying Dutchmen's first practice of 2011-12, I was stiff and nursing a sore back in a bar in Rochester. Getting old and standing still for hours at a time waiting for the headlining act to take the stage is a bitch.
A bar eight hours from home is an odd place to be when you get to be my age, especially on a national holiday such as FIRST PRACTICE OF THE YEAR DAY! (Doesn’t really roll off the tongue—I blame Hallmark) But I was there with a definitive Defiantly Dutch purpose:
I was going to get my picture taken with Gary Cherone as we held aloft a 1994-95 Hofstra basketball poster.
Of course, by merely clicking here you know the story has a happy ending. And if you’re a regular visitor, either here or on Twitter, you probably know that Extreme—the band Cherone fronts, though not the one I saw in Rochester, more on that shortly—is the Official Band of Defiantly Dutch and that their 1991 hit “Hole Hearted” is our official anthem.
In August 2009, Extreme put on the best show I ever saw, one that turned me into a super-duper Internet sensation (snort). In terms of both background music and philosophies, Cherone and Extreme are a big part of the Defiantly Dutch operation.
Trying to find correlations or similarities between oneself and a famous entertainer is an inherently dangerous proposition, one that skirts a little too close to a giant ego stroke. “Hey look at me I’m just like so-and-so!” So let’s make this clear: I’m not declaring I’m anything like Cherone. He’s sung two top-five hits and on three top-10 albums, performed as the lead in “Jesus Christ Superstar,” headlined arenas and stadiums around the world with both Extreme and Van Halen and, with Extreme, stole the show at the Freddie Mercury tribute concert in 1992. I quote sitcoms on Twitter. He survived the slings and arrows of being The Other Lead Singer in Van Halen. I survived the slings and arrows of bashing Jim Larranaga.
But in terms of both words and actions, Cherone’s work is an inspiration. I came to think of “Hole Hearted” as an especially appropriate song about writing as multiple deadlines came and went for my Red Sox book (I know, what are the odds, me missing deadlines—in my defense, I was writing 90 percent of a monthly magazine and posting multiple stories per day on the accompanying website) and I began to wonder if I’d ever finish it. “Should have known from the start I’d fall short with the things I do” is not only a pretty sobering thought for a writer, it’s also a pretty downbeat way to end an album.
I finally managed to finish what I started and remain proud of the final product, yet in the nearly four years since I was kicked to the curb by Corporate America and forced into the world of non-journalism writing, I’ve found just about every line of “Hole Hearted” particularly relevant—about not only the act of writing but also the challenge of trying to find time for a passion that no longer pays the bills yet remains just about as essential to me as breathing. As the saying goes: It’s hard to write, but it’s harder not to. (True story: Carl Van Doren, who spoke those spot-on words, died in my hometown in Connecticut).

Extreme is on a long hiatus (guitarist Nuno Bettencourt is touring as Rhianna's lead guitarist—bet you never expected a Rhianna reference here), so Cherone put together Hurtsmile along with his brother, Mark, and released a self-titled CD (Google it, kids!) last winter. The CD is similar to Extreme in that it’s not easily categorized and requires and rewards repeated listens. My wife’s cousins go to college in the Rochester area, so when I saw Hurtsmile’s tour itinerary, we decided to make a weekend out of it.

I’d heard for years that Cherone was a friendly to fans and regularly met with them after shows, so I had it in the back of my mind that maybe I’d get to shake his hand. But while packing the car the day before our departure, the idea struck me: Bring the 1994-95 poster schedule and ask him to pose for a picture with it. I mean, that would be brilliant—Defiantly Dutch doesn’t get much more, umm, defiantly dutch than the lead singer of Extreme holding aloft a poster picturing Jay Wright’s first team.

Of course it’s also insane, and silly-sounding to anyone else, so while I put the poster in the trunk, I wasn’t all that sure I’d actually ask him for a picture, never mind one in which we’re holding the poster.

It took one song for me to figure out that I had to find a way to get this picture taken. There were just a few dozen people milling about at the Montage Music Hall, and I counted just 14 people lined up along the front of the stage when Cherone and Hurtsmile appeared after four opening acts.

Yet Cherone took the stage as if he was playing in front of tens of thousands, racing around in such a fury that he was soaked in sweat by the end of the first song. At multiple points during the show, Cherone thanked those in attendance and said he appreciated all those who came out as well as the club owners for hosting the concert.

This Hurtsmile “tour” was actually just a two-date trek to upstate New York and was at least the band’s third mini-tour of the year in the United States. My guess is none of these jaunts are money-making endeavors for Cherone and the band and that a lot has to go right just to schedule these short trips. I can appreciate that, and hope that while Hurtsmile was driving home, a drunken fan of a rival and overlooked late ‘80s/early ‘90s hard rock band didn’t plow into their van.

But despite the haphazard scheduling and the lack of profitability, Cherone maximized and cherished the opportunity, put everything he had into the show in Rochester and performed as if he was playing Madison Square Garden.

I like to think I can appreciate that too. I can’t write here as much as I’d like to, and that disappoints me. I’ve got about 10 story ideas that I figured I’d post in the preseason and all 10 are still in my head. Nothing would make me happier than focusing all of my energies on this blog. If that is not possible, then what I can do is make sure the posts I do make are worth reading, and that I deliver as promised if I must emphasize quality over quantity.

That said, I’ll also make some modifications in order to post in a more frequent and timely fashion now that the season has started. You already saw the first new wrinkle of the season, the “Postgame Buffet.” This is intended to get a recap up shortly after, you know, the game has actually been played. I’m not a huge fan of bullet point recaps, and this may only last until Charles Jenkins comes out of the stands to beat George Mason with a 93-footer and I find it impossible to try and wax poetic about what I just saw, but it drives me crazy to waste time trying to find the right tone and the right phrasing while a day or more goes by.

So as a compromise, I offer “The Day After,” which will be a more traditional story providing further analysis of a particular part of the game. The hope is, without trying to cram everything into one piece, I’ll offer two better and better focused pieces. My initial feeling is I’ll post the Postgame Buffet the day after the game, even on the weekends, with The Day After appearing, in true Alanis irony, two days after the game is actually played.

We’ll see how it goes, and I thank you in advance for your patience both with my sporadic posting as well as the imminent adaptation process. And thanks to Gary Cherone for the inspiration and motivation, for a pretty cool conversation following the show and for posing for the photo after I told him about Extreme’s exalted status over here. And I bet he thought hitting number one with “More Than Words” and singing for Van Halen was a big deal!