The Day After (or so): Lester's 2nd senior year worth the wait 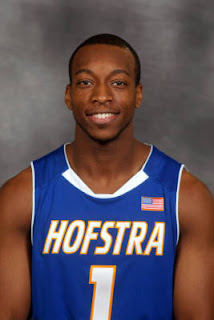 Flying Dutchmen fun fact: Nathaniel Lester scored the final points of the Tom Pecora Era by hitting a pair of free throws with 35 seconds left in the That Which Shall Not Be Named tournament loss to IUPUI on March 17, 2009.

Somewhat amazingly, Lester did not also score the first points of the Pecora Era in 2001. Nor was he in my Comm 101 class Monday, Wednesday and Friday mornings in the fall of 1993. Nor did he play both basketball and tennis under Butch van Breda Kolff, nor did—well, you get the idea. Lester, a redshirt senior who graduated in three-and-a-half years and could finish his masters degree in linguistics by May, has been at Hofstra a long time.

“I’m definitely the old man on the team,” Lester said with a laugh last week. “I get a lot of those old guy jokes.”

But the old guy sure looks like he’s going to get the last laugh. Lester, who missed all of last season due to a torn left quad (although it should be noted that when you search “Nathaniel Lester injury” on Google, the third link is about a Nathaniel Lester who got injured in 1898), played his first game in 604 days last Friday and promptly had the best night of his Hofstra career, no matter how long that is.

Lester scored 33 points—shattering his previous career high by 11—in leading the Dutchmen to an 89-71 rout of Long Island. He scored 11 straight points for the Dutchmen in the first half, a stretch in which he managed to tie his career high for 3-pointers in a game by hitting three in as many possessions over a 101-second span. He was also 12-for-14 from the free throw line, far surpassing his previous bests in both categories, as he earned CAA Player of the Week honors.

“I’ve dreamed about a day like this since I came to Hofstra,” Lester said afterward.

It was the kind of day that many expected out of Lester back in 1898—err, 2007—when he arrived at Hofstra as the most highly touted member of a freshman class that also included a pair of redshirts named Charles Jenkins and Greg Washington. Lester, a 6-foot-5 player who could play either guard or forward position, was considered one of the best players in New York City as a high school senior, when he averaged 29 points per game and led Canarsie to the PSAL semifinals.

Jenkins, of course, wasted zero time beginning to establish himself as the best player in school history. Like Washington, Lester gradually worked his way into the starting lineup for Pecora, and, after a few impressive bursts his first two seasons (including two double-doubles as a sophomore and a stretch in which he scored at least 10 points in eight of his final 13 games), seemed ready to blossom into a star as the calendar turned to 2010.

With Jenkins battling foul trouble, Lester scored 17 points and led the Dutchmen past Florida Atlantic Dec. 29. Four days later, in the real CAA opener against William & Mary, Lester was the best player on the floor in posting game highs with 14 points and 10 rebounds in a 48-47 loss.

But Lester lost his momentum, and eventually his starting job. Over the final 20 games of the season, he averaged just 5.8 points per contest. Lester played fewer than 30 minutes in each of the final 18 games, played 20 minutes or less 10 times in the last 11 games and bottomed out against IUPUI, when he started in place of an injured Washington but was benched 94 seconds into the game and scored half of his eight points in the meaningless final minute.

“I was just going to be that energy guy coming off the bench,” Lester said of his mindset following the demotion. “If that’s what my team needed me to do, then that’s what I was going to get out there and do. Whatever it takes to win. That’s the type of player I am.”

Pecora said Lester might have struggled because he was one of the few healthy players on a roster decimated by injury and illness in January 2010. The Dutchmen went 1-8 in Lester’s final nine starts, a stretch that included seven losses in the Dutchmen’s first eight CAA games in January.

“Maybe sometimes you don’t win and you’re the healthy guy and you say ‘Man, I can’t carry the team,’” Pecora said.

Pecora also said Lester may have struggled because it was difficult for both he and Lester to find a role in a guard-dominated offense for a classic “tweener” such as Lester.

“I remember him winning a game for us at Florida Atlantic—Charles got in foul trouble, I ran 10 cuts in a row for [Lester],” Pecora said. “Nat had certain sweet spots on the floor—if you got him the ball in those spots, he was unstoppable. And that’s what I had to get better at.

“I think it was hard. He wasn’t a guard who dominated the ball, and Charles had the ball in his hands. So that made it difficult for him at times, I think.”

Pecora’s exit in March 2010, followed by the transfers of Chaz Williams and Halil Kanacevic, seemingly opened up another opportunity to start for Lester, and he and his best friends Jenkins and Washington wasted little time bonding with new NEW coach Mo Cassara. But Lester’s senior season became endangered in July, when he tore the quad while working out at Shuart Stadium.

“I didn’t realize until two hours later that something was really wrong,” Lester said. “I stretched out and went back to my room and realized my leg was swollen.”

While the Dutchmen desperately needed the depth Lester could have provided, Cassara and Lester agreed not to burn his senior year for what would have been, at best, a half-season’s worth of games. That a new coach would redshirt a senior player whom he inherited spoke volumes of how quickly Cassara and his staff bonded with Lester.

“I think most coaches would probably try to sacrifice Nat’s senior year by getting him out there as quick as we could,” Cassara said. “But what it really developed into is he ended up playing a great role for us on the bench. He was a great guy in the locker room, a great guy on the bench. And once I saw that he embraced that role, I had to do everything I could to try to support him and do what he wanted to do.”

While freshmen are regular redshirts at Hofstra, Lester is only the second Flying Dutchmen upperclassmen to since 1994 (Danny Walker redshirted as a senior in 2002-03). While freshmen use a redshirt season to adjust to college life off the court and to get an idea of what to expect on it, sitting out a year allows an older player such as Lester to see the game in a far different fashion, one that will allow him to slow things down upon his return.

“On the court, you can see when the game needs to be slowed down and when it needs to be picked up and how you need to come out hard and bring energy,” Lester said. “I think being in the game for 40 minutes, 35 minutes, you don’t see all of that stuff.”

“For a guy like Nat, he was able to sit back and really watch this team develop and watch our program develop and watch our system develop,” Cassara said. “And he really bought into it. I think sometimes that year sitting out is a lot more valuable sometimes as an older kid because they have a few more tools in their pocket to say ‘Wow, that really works.’ They can kind of reference that a little. Sometimes a freshman doesn’t know any better. They’re just sitting out to sit out.”

Basketball staffers noted last summer how Lester’s presence and double-double potential could help the Flying Dutchmen exceed low pre-season expectations and how he seemed primed for an impressive senior season. Nobody could have foreseen last Friday night, when Lester became the first player not named Charles Jenkins or Antoine Agudio to score 30 points in a game for the Dutchmen since Carlos Rivera in 2007.

Walker returned from his redshirt season by putting up a career-high 21 points in the Dutchmen’s season-opening win over Marist Nov. 18, 2003. He exceeded double digits just six more times and recorded only one double-double the rest of the way, but those who know Lester seem to believe many more big nights are in his future.

“As far as the wings go, with him on one side and Mike Moore on the other—not many teams that wouldn’t want those two guys playing on your wings,” Pecora said.

“Obviously the injury fed into it a little bit and having more time to build a relationship with me and our staff, but Nat’s one of those guys that’s benefited from the change and that’s really helped him, I think, develop to where he is now,” Cassara said last week.

After the game, Cassara was busting with—WAIT FOR IT—pride over both Lester’s emergence and the amount of time that went into making it possible. “I'm really proud of Nat because he stuck with it," Cassara said. "Certainly not a more deserving guy than Nat Lester—the time he’s put into this program [and] this university."

Labels: Nathaniel Lester, The Day After