For Cassara, a Hofstra basketball coach unlike any other, Year Two begins in familiar fashion 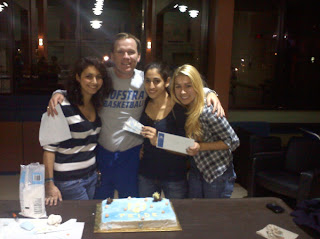 Judging cakes is all part of a day's work for Mo Cassara.

“I’m wolfing down the first thing I’ve eaten all day,” Cassara said as he dove into a cardboard box filled with Pan Asia Beef inside the Hofstra Student Center around 7:30 last night, less than 24 hours before the Dutchmen’s season tips off against Long Island at the Arena.

Between 2:30 and 8:30 yesterday, Cassara participated in a Newsday.com chat, ran a three-hour practice, raced across campus, met with student groups in the Student Center to promote tonight’s home opener (the first 1,111 students will receive a T-shirt and one of the three groups with the most students in attendance will win $1,111.11), ate dinner at a table in front of the bookstore while answering questions from some pesky blogger guy and walked to the back of the cafeteria to judge a student “Ace of Cakes” competition.

That’s a full day for anyone, but it was just the final leg in the latest of an endless series of 16- or 18-hour days for Cassara, whose Wednesday was even busier: He joined university dignitaries at a Yankee Stadium party honoring the 40th anniversary of the Hofstra Law School.

“Got back home about 12:30, was up at 5:30 working on the social media and catching up on my email, take the dogs for a walk, take a shower and been at it ever since,” Cassara said. “It’s a long day.

“Dunkin’ Donuts coffee, man. They just hand me a coffee when I walk in the door.”

The employees at the Dunkin’ Donuts across from Hofstra’s main entrance aren’t the only ones who instantly recognize Cassara these days. Indeed, to see Cassara functioning on adrenaline, hugging the cashiers at the Student Center cafeteria and offering tickets to anyone who says hello is to be reminded of Jay Wright, who arrived with similar enthusiasm 17 years ago.

Wright pitched the program to an apathetic student body by shooting free throws outside the Student Center, meeting with dozens of groups on campus and accepting challenges to show off his dance moves at the first Midnight Madness at Hofstra USA in 1994. (Retroactive Tweet: Jay Wright is auditioning to join Hammer right in front of me. THAT JUST HAPPENED. #Hofstra #NACHoops)

There’s little doubt Cassara would shoot free throws and throw the boogie down at Hofstra USA if requested, but social media has, of course, allowed Cassara to introduce himself to a far larger crowd. He’s also borrowing a page from the Wright book by recognizing the value of shaking hands and making speeches.

“One of my goals here is to make every kid on this campus that wants to be involved have access to me, to be able to feel like they know me,” Cassara said. “I think if we do that, we would just continue to build a great fanbase here.”

In many ways beyond his embracing of social media, though, Cassara is a Hofstra coach unlike any other. His unprecedented path to the big office overlooking Hofstra Arena, of course, is bordering on the stuff of legend by now. But it’s not just the sequence of events that earned him the job that separates Cassara from Wright, Tom Pecora and the rest of his predecessors.

He went from a third assistant at Boston College to the head job, which is the coaching equivalent of playing a bar one night and headlining an arena the next. That relative inexperience lent an air of never-to-be-replicated newness, wide-eyed wonder and outright joy to many of last year’s experiences, some of which Cassara wishes he could bottle and experience everyday.

There was the scene at the Richmond Coliseum just after tipoff against Old Dominion, when the Flying Dutchmen baseball team arrived from a rainout at Norfolk State to cheer on the basketball team in the CAA semifinals. Two weeks earlier, Cassara—flanked by Jack Hayes and Danny McCabe—smiled along with his bosses as they stood near Section 114 in the Arena and watched the Flying Dutchwomen mount a comeback from a 23-point deficit to beat James Madison.

“Walking through the Student Center here with News 12 right before Charles broke the [school scoring] record, we had a sellout the next day, people on campus were excited, the team was excited, everybody was happy,” Cassara said. “That was one of those moments where I was like ‘I wish I could do that everyday.’ I think the other one coming to my mind was probably walking out on the court for the last home game with Delaware and it was a sold-out crowd, a bunch of excited students [out] to see some seniors kind of end their career the right way.”

While the good far outweighed the bad, last year was not without unpleasant or difficult moments for Cassara. When other schools were using the perception that Cassara was on a one-year deal against him on the recruiting trail, Hofstra—which is normally cloaked in the type of secrecy only an NFL coach can appreciate—announced Cassara signed a four-year deal upon taking over for Tim Welsh (Cassara signed an extension through 2015-16 following the season).

After the season, Cassara had to replace assistant coach Allen Griffin, who took a similar position with Dayton, and navigate the delicate process of meeting with Yves Jules, Paul Bilbo and Roland Brown and letting them know there would be little playing time in the future for the three players, all of whom ended up transferring.

“Those are really, really tough conversations. Really tough things to deal with. It’s part of the business, but nothing can prepare me for how challenging that was—a lot of the challenges we went through after the season last year. It certainly gave me a lot of sleepless nights—not that I sleep very much anyway.”

Cassara had perhaps his most unique sleepless night ever when Hurricane Irene washed over Long Island Aug. 27-28. Cassara lives in Point Lookout, which is one of the most flood-prone areas on Long Island, but the higher ground he sought wasn’t his parents’ house near the Canadian border but his office in the Arena, where he rode out the storm with his dogs.

“I was worried I wasn’t going to be able to get back here, so I just said ‘Hey, I might be able to get a day’s worth of stuff done in the office.’” Cassara said. “I brought the dogs up. [Facilities director] Jay Artinian probably isn’t thrilled about them hanging out in the office.”

Heading into the office to ride out a hurricane is proof that while Cassara shares the same dedication and passion for the job as his predecessors, he is able to display it in a different way than anyone else who has occupied the position. Cassara, who is single with no children, is the first unmarried, childless head coach at Hofstra since at least the 1950s and, likely, the first one in program history. While Cassara admits he would like to someday strike a better balance between his work and personal lives, he also recognizes his unyielding focus can generate positive results for the Flying Dutchmen.

“As you can tell from my social life, I don’t have a great balance in what I do,” Cassara said. “I think that people would say that I’m married to my job. I’ve been able to bounce around a lot in this profession, been all over the country, never really been in one place long enough and I haven’t been able to find that balance yet. I think it also helps me do what I want to do really well right now.”

Cassara’s staff is similarly focused. Only longtime Cassara mentor Wayne Morgan is married, and every person on the staff has been fired from a previous gig and is fueled by the hunger that is generated by the fear of falling out of a business in which it is exceedingly difficult to get back in. Cassara’s sleepless nights are dominated by the thought that, if not for a good first impression with Stuart Rabinowitz, he might be doing his best Tom Cruise-circa-1988 impersonation at his Dad’s bar tonight instead of leading the Dutchmen on to the court against Long Island.

“I think I have a newfound appreciation for that, after going through what we went thru and then obviously [having] a president and an AD who took a chance on me as a young guy,” Cassara said. “I think we embrace that and we kind of use that to drive us a little bit everyday when it might not be going that well.”

More than anyone else, Cassara knows all the Tweeting and all the Facebook friending and all the cake judging in the world won’t matter if the Dutchmen don’t win. As year two begins, he and his staff have a better idea of what to expect, both internally and within the CAA, and what it will take to lift the program to the heights everyone envisions.

While Cassara is eager for this season to begin and looking forward to applying what he learned last year in order to help the Dutchmen exceed meager outside expectations, he is excited about what next year and the impact a big-time recruiting class—including Penn State transfer Taran Buie and UConn transfer Jamaal Coombs-McDaniel, each of whom is practicing with the Dutchmen as they sit out this season, and recently signed high school seniors Dallas Anglin and Jimmy Hall—can make in both the short- and long-term.

Until everything comes together—and probably even after that—there are fans to lure, tickets to sell, new friends to make and cakes to judge. After strolling from table to table judging the cakes, Cassara announced the winners and posed for a picture with the team of Michelle LaFiura, Brittany Visconti and Rachel O’Neill.

“Hey,” Cassara said as he draped his arms around the trio. “Are you guys going to come to some games this year?”