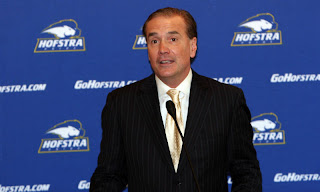 I guess it's time that Hofstra fans get off the balls of GMU over a low-blow 20 years ago.

What goes around comes around I suppose.

As much as I never understood the animosity that HU people have towards GMU and found it to be quite stupid honestly, regardless of the NCAA snub, I was looking forward to the Welsh era at HU.

Yes. This is all sorts of karmic payback for me mocking GMU for pillows, low class and low blows. DWI is totally comparable to those mostly harmless events. Sheesh.

Jerry, I meant it more sarcastically than seriously... but that aside, you (HU fans) hold some serious grudges towards George Mason for some of the most feeble reasons.

Regardless, I hope that his not guilty plea has some legitimacy to it and doesn't screw things up at your school...
I wouldn't want this to happen at any CAA school, included yours.