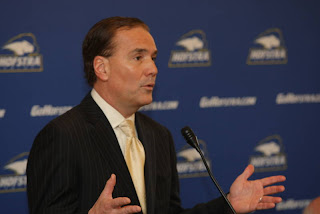 Four weeks after he officially became the 11th head men’s basketball coach in Hofstra history, Tim Welsh’s office looks like it did when Tom Pecora finished packing his belongings. There is nothing hanging on the wall, though a framed picture of Speedy Claxton and Norman Richardson conversing on an NBA court in their 76ers and Pacers uniforms is upright on a table. The desk is almost empty as well, with no knick-knacks. Even the placement of the desktop computer—in a bookcase facing the back wall—is the exact same as it was when Pecora occupied the room.

Of course, Welsh has all summer to decorate. Welsh, hired by Hofstra after two seasons with ESPN, wasted no time diving into his new job. If he’s not traveling to and fro on recruiting trips, Welsh is meeting with returning Flying Dutchmen players, overseeing the two hours of practice allowed in the off-season by the NCAA—and, oh yeah, finding a place to live, though he noted that his office couch is comfortable. He and his wife expect to close on a place on the south shore of Nassau County shortly.

Welsh did find time Wednesday for an in-depth chat about his new job and all the challenges and tasks therein. This is part one of what will likely be a three-part interview. Part two will appear tomorrow, with part three to follow either later tomorrow or Monday. Thanks to Welsh for sitting down with me and to ace men’s basketball SID Jeremy Kniffin for setting up the interview.

How much different was April 5—your first day on the job after the Final Four—than, say, the previous Monday?

Well, it was great. It was great to be back doing what we do. And certainly I enjoyed my time at ESPN and SNY, but we're coaches. I wanted to come back to coaching the minute I left coaching, but I wanted to go back to a place where I knew there was support, they had vision, they had a plan and there had been some sort of success in the past. And it all came about here. So the transition to this job was very easy to me, because everything here is in place to win and be successful. The people, the support system, the infrastructure is all terrific.

So it was a whirlwind week where you go from not really thinking about where you might be—I knew with all the job openings there were that certainly we may have an opportunity, I didn’t know where it was going to happen or what was going to happen, but it’s just kind of keep your eye open and talk to the right people and see where it may fall. When this opportunity came about, I was very, very excited, because I knew the program from afar because o, obviously, my time at Iona, we used to play Hofstra every year. Jay and I are very good friends. And Tommy, I really was a great friend with him. And you saw what he did here. [Welsh] understood what a great program he built, so being able to step into a situation like this was certainly a positive for me and didn’t really think about being back in coaching. It just felt like you never left. It’s like riding a bike.

With so much to do in the first few weeks on the job—hire a staff, build relationships with players, recruit—how do you keep from getting overwhelmed?

I think the experience of having done it before is really the biggest advantage. Being in the profession a long time, you know a lot of people. You know, being a coach from the Northeast slash Big East slash being in New York, you know the players—not personally, but you know the people around them. So that part was easier, because there’s always that kind of semi-wall that’s built up as you get to know people. And that trust factor has to be built up over time and relationships [have to be built]. But I think it was easier here because of the fact that I think these guys knew us. Either we’ve coached their friends or we’ve coached people that they know from high school. Or high school coaches [and] AAU coaches knew us, or they just basically knew us from either being in the northeast or being on TV. So I think that part was pretty easy.

And putting the staff together—it all came together very, very quickly, because of just our experience in the profession and the people we know. And I had an idea right away who we wanted to target and the three guys [Mo Cassara, Steve DeMeo and Allen Griffin] we wanted, we got right away. So that was also a big, big plus.

How different is it getting to know players—and vice versa—now, in the age of instant information, as opposed to 1998, when you took over at Providence, or even 1994 when Jay and Tom took over here?

A lot different. I think it’s easier now just because your network of people that you know is bigger. Mostly it’s because your years of experience, years of coaching, people you’ve met. Also, I’m not from Oklahoma or Nevada—I’m from here, so I know Chaz Williams’ coach. I know Charles’ people. I know Greg Washington’s people. That’s very easy. When I call them up, I don’t have to do a big introductory session with them. I think that part was very advantageous as well.

And also how you approach it. I think you learn over the years. I think [when] we went into Providence, you don’t know what to expect when you’re taking over a new program. Here, I think we learned from those things—what the players expect and what they need. Their immediate needs are a lot of face time with the coaches, and I think that’s what we tried to give these guys, a lot of that. And the other thing that you can do that you couldn’t do 12 years ago is that you can get on the floor with them in the springtime. Then, you couldn’t. That’s where you build your relationships, is on the court. They want to see how you’re going to coach them how you’re going to treat them. And certainly it’s not the same as in October, how you’re going to build a team and work practice, but just hearing your voice out there on the court as the ball bounces helps ease that relationship and quickens that trust factor out there. And we didn’t have that in 1998.

Much like Tom here, Pete Gillen left Providence on good terms prior to your arrival there. How much easier does that make things for you?

I think it’s much easier because I think when a coach gets replaced by the school, there’s a little bit of tension there with the players, because the players usually grow fond of the coach and immediately I think they start having second thoughts about everything because they’re a little bit upset with the school for doing that, with the administration. They don’t think it’s right, the rug has been pulled out from under them. This situation—Tom left the program in a great situation. There were no hard feelings, he did it the right way with the players and the people here on campus, so that part made it very, very easy for me to just step in.

And I think the other easy part is that Tom and I have a good relationships too. We’re friends, I invited him to my wedding last year. That part made it easier. If I have a question about something, I don’t hesitate to call him up and pick up the phone, because he also has a caring for the school and also these players too. And I respect that. Some coaches go in and won’t even mention the previous coach’s name, for some reason. I think basically, they’re not confident [or] they’re afraid, they’re paranoid to mention the old coach. But Tom, that’s not the case here. We’re very confident in what we’re going to do, but also respectful of what he did and understanding that we’re going to try to continue on what he’s done and still keep building.

It’s easy to stay at Hofstra—there have been three coaches here in 20 years and Jay and Tom each stayed longer than their predecessor. How much did that factor into your decision to come here?

Absolutely 100 percent. I think for my background, you’ll see that we stayed at Providence for 10 years and we had numerous opportunities to look at other situations. I’m a person that likes to be settled in a place where they like to be settled. That’s important to me—very, very important. Matter of fact, Jay told me before I took the job that he never wanted to leave here. He flat-out told me that, that’s how much he loved it here. And I know Tom felt the same way, stayed a long time. The way the world is, college coaching, most people say you have a seven-year rule. It’s nice to see that really doesn’t come into play here. The people here trust [you] as long as you do a good job and it seems like a place you can stay a long time.

Hofstra basketball is in much better position now than it was when Jay took over in 1994. How has the recent success of the program made things easier for you these last few weeks?

It’s got a good reputation, not only in New York but nationally. And I think, because of what Jay and Tom have done, and also the people here at the school—you can’t do it by yourself. They’ve got a good infrastructure here, not only the basketball program but with the athletic department I’ve been very, very impressed with the athletic department since I’ve been here. I’ve heard a lot of great things and I knew Jack Hayes, but you don't really know what a place is like until you get your feet settled into the sand at a place. And that part is really [what] made me confident that we can do the right thing here on the court, be successful, because the fact [is] the infrastructure here is tremendous.

And the institution is on great footing, as well, with the start of the medical school. When schools tackle those type of situations—and moving forward, that’s an ambitious thing, to start a med school—that means the school is doing well. And I know we just want to keep the brand name as it is and try to keep advancing it. I think it’s a great opportunity. We have a great opportunity to do so here, even with the current team that we have.

Aside from talent, what is the main thing that grabs your attention when you are recruiting a player?

The main thing we look for is a player that has a good feel on how to play the game. A lot of guys are wowed by athleticism and jumping ability and shooters per se, or whatever. But I like guys that have a good feel, that you don’t have to lock into saying well, he’s a certain position—he’s a two, he’s a three, he’s a four. We like to just recruit good basketball players, and that helps us. I think we can move the pieces around better that way. So when we look at recruiting, we just try to find the best guys that fit into a concept of a good feel for the game—good skill, high skill set and have a real feel of how to play the game of basketball.