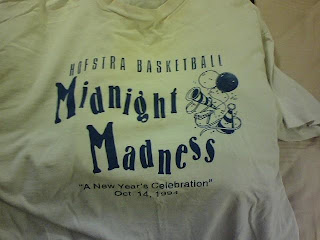 If I had any sense at all, I’d retire Defiantly Dutch right now (as my friends six hours south scream in approval) because short of the Flying Dutchmen someday pulling a Butler, it’ll never get any better than this—an interview with the man who saved Hofstra basketball, Jay Wright.

It’ll be 16 years next week since I first spoke with Wright and the guy still fills up a notebook and sells a school—even one he hasn’t worked at in nine years!—like nobody else on the planet. When I hung up the phone Wednesday, I was ready to climb to the top of my roof, plant an old-school Hofstra pride flag there (I couldn't find an old-school Hofstra pride flag, but trust me, that's what it looks like--I think, anyway) and begin calling the Flying Dutchmen by their so-called “official” nickname. OK, I wasn’t that ready. But I was close.

You’ll see some of his quotes in today’s story about his role in the Tim Welsh search and I’m hoping to have a story or two next week to coincide with the anniversary of Wright and Tom Pecora arriving on campus. But if anyone deserves the unedited Q&A treatment, it’s Wright, who was kind enough to take some time out of his busy schedule to discuss the aforementioned topics as well as Pecora’s departure for Fordham, his memories of his first days and weeks on campus in 1994 and his thoughts on Hofstra now vs. Hofstra then.

Thanks so much to Jay for speaking to us and to Villanova spokesman Mike Sheridan for setting up the interview.

How often does another school ask you for input or advice in its coaching search and how did Hofstra come to you in this situation?

We have so many assistant coaches that are out there now that you do wind up talking to a lot of people. And obviously, the Hofstra job, to me, is still very dear to my heart. My family, my kids, grew up with Hofstra basketball. They still watch the games anytime [Hofstra is] on TV. We get the MSG games and the Comcast games and any chance we get, we watch them. So it’s still very important to me.

You also had Van involved, which was important, and you want to support Van because he’s part of the family. And then you also understand that the president and the athletic director have to make the decision for what is best at the time. So I kind of knew they were going to go outside. [They] just asked me more about Tim and I thought if you want to go outside the program, Tim is perfect because I think he’s got great New York ties and I think he’ll respect the great tradition of Hofstra. He’s good friends with Tom and myself, he knows how much we love Hofstra. He also understands the pride that we all took in New York basketball, and I know Tim does also. And I think Tim will understand how much a part of Hofstra basketball New York basketball is.

What was it about Hofstra that led you to recommend the job to Tim?

I think that Tim can recruit the New York area really well. I know his wife Megan, I think they’ll love living on Long Island. Megan and [Wright’s wife] Patty are friends, they know how much we loved living on Long Island. We know all the people at Hofstra and we think Tim will fit in well with everyone down there—not just Jack but everyone in admissions and housing and on campus. He’s a down-to-Earth guy who fits in great with everybody.

Was this process bittersweet for you, since it was in response to Tom leaving, or was it kind of invigorating because it meant Tom was going through what you went thru when you left for Villanova in 2001?

It was exciting. I think Tom did an amazing job at Hofstra and really brought the program to another level. That conference is a much more powerful conference than the conference that we were in. I know Tom worked very hard at Hofstra to try to get Hofstra into the Atlantic 10. I know that was a goal of his so I was excited for him that he got to coach in the Atlantic 10. I know that was important to him. And I was excited for Hofstra that they had the interest that they did from Tim Welsh.

Tom mentioned how the two of you talk all the time, but particularly whenever one of you is faced with a big career decision. In your opinion, what else about Fordham—other than the chance to coach in the Atlantic 10—made it worthwhile for Tom to leave the comfort and safety of Hofstra?

I think the challenge of getting Fordham to the top of the Atlantic 10. I think, also, the challenge of knowing that the Atlantic 10 is more than a one-big conference, that you’ve got the opportunity to go to the NCAA and not leave New York. How many times do you get a chance like that and not have to leave New York? So I think those three factors were important and I agreed with him it was a great opportunity he couldn’t pass up.

How meaningful was it to you to have Hofstra asking for your advice as it searched for Pecora’s replacement?

That means a lot. I think Jack and Stuart Rabinowitz both know that my family still takes great pride in Hofstra and have great love for Hofstra and Hofstra basketball. Hofstra University [is] very important to us and always will be. I would have been just as understanding if they didn’t include me in the process, because I’m [just] a fan and a supporter. But I did take great pride in the fact that they did consider my opinion.

How much pride do you take in the Hofstra job going from a dues-paying gig to a destination that is attractive to a former Big East coach?

I think Tom and I both take great pride—all of us take great pride in how people perceive Hofstra University. Having a medical school now, the way that campus has grown and just how well-known Hofstra University is. And also Hofstra basketball [and how] someone of Tim’s stature would be excited about going there. It just shows it’s growing incredibly. A lot of us feel great about where the university is and where the basketball program is.

What are your memories of the Hofstra job, almost 16 years after you were named head coach?

I’m always grateful to [former athletic director] Jim Garvey and Dr. Shuart for giving me that opportunity and also for their patience, because I wasn’t that good a coach in the first few years. I was making a lot of mistakes and they hung with me and we all kind of grew together, even to the point where we worked together in getting the new Arena. That is why Hofstra is always near to my heart. I’ll always remember that if not for the patience—and I try to tell other people this when they make hires, too, that I got great support there during the early years. We weren’t that good, but we still got tremendous support, especially from Dr. Shuart. And that was really important. We got great patience and support, so I really appreciated that and I thank them for everything they did for me.

What do you remember about trying to get the campus and the community behind you?

[Before] we took the job, we weren’t in a conference. So it was tough for people to identify with the team because there was no conference. The year before we got there, they won the ECC but didn’t have an automatic bid. We had to get some local players that people recognized, get into a conference that people recognized and then we had to win some games. It took a lot of time to create a product that people [wanted to] see and an atmosphere that was fun to be involved in. Our students really helped us. If you remember, our early Midnight Madness [were] at Hofstra USA—our students really helped us with that, it was really so much fun. We all look back on it [with] fondness and memories. In a lot of ways, it was a simpler life. It was a lot of fun. I’d do it all over again in a second.

One of the most interesting things about last week was how everyone—the players as well as the fans—could read up on and learn about Tim Welsh before he even stepped to the podium. What did you do, in the infant days of the Internet, to get not only people on campus to know about you but to get to know your new players?

[With players], we had to do it all face-to-face. Tim’s going to watch their games on TV and get to know them [that way]. We had to scrounge up tapes and watch game film that was filmed from a camera up in the stands. And we talked to our [previous] coach, VBK, a lot about each individual kid. I called their high school coaches. It was a different time.

What do you remember about the day you were introduced at Hofstra?

I just remember picking up my wife, who was nine months pregnant and flying in from Las Vegas. I remember picking her up—a cloudy, gray day with mist and we’d just left 80 degrees, sunny Las Vegas. And we were in traffic on the LIE and running late for our own press conference. And just being so happy [despite] all that—so happy to be there.

Did you see Tom and Tim in Indianapolis?

We have a Villanova party every year at the Final Four. We have everyone who worked or coached at Villanova that is still in college basketball and it’s a big event. But everyone at Hofstra is included in that because Tom always brought his staff. Tim automatically becomes a part of that family.

Do you ever marvel at what Hofstra is now versus what it was when you got there?

I really do. Every time I go back there, I’m just amazed. I think Dr. Shuart started that vision of just being a grand university and national and I think Stuart is just taking it and running with it. It’s still one of the most beautiful campuses. I love the commitment to athletics. I understand with football that was a blow, but I just see lacrosse and basketball just blowing up. And the passion that the students and the alumni have grows and grows. I just love the place I’m amazed with the medical school how much it’s growing and how much nationally it’s known as a university.

Lastly, Tom always said he hated to play friends. So does his departure mean Hofstra and Villanova will play one another anytime soon?

[Laughs] Tim’s a real good friend of mine and it’s Hofstra. I really don’t like doing that. But you never know.

Why no question about the best happy hours around campus?