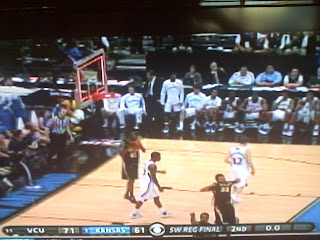 Lookit Lis. You can pinpoint the exact moment Jim Larranaga decided to leave the CAA because a CAA team had made a non-fraudulent Final Four run and he was no longer the BMOC.

The Flying Dutchmen ensured their turkey would taste much better #OldSchoolSportswritingCliche Wednesday night, when Justin Wright-Foreman did Justin Wright-Foreman things in leading the Dutchmen to an 80-71 win over Cal State Fullerton and Wright-Foreman’s buddy, Kyle Allman Jr. Speaking of old buddies, the Dutchmen will look to make it two in a row tonight, when they visit former #CAAHoops foe VCU. Here’s a look back at the win over the Titans and a look ahead to the Rams.

THE MOST RECENT GAME SUMMARIZED IN ONE PARAGRAPH
Kyle Allman Jr. scored 38 points for Cal State Fullerton, but Justin Wright-Foreman outdueled him with yet another monster game with 37 points, six assists and five rebounds as the Dutchmen beat Cal State Fullerton and earned their first win over a Big West team this century. That’s excitement! Wright-Foreman missed out on his first career 40-point game when he missed two 3-pointers in the final few minutes. The Dutchmen ended the first half on a 20-9 run to take a 12-point lead at intermission and didn’t lead by fewer than 10 points in the second half until Fullerton’s final basket. Eli Pemberton had 20 points and six rebounds for the Dutchmen while Jacquil Taylor had nine rebound in just 16 minutes and Jalen Ray added seven points in 19 minutes.

COACHSPEAK: “I’m proud of Justin. I mean, let’s face it, the elephant in the room was the fact that Justin and his former high school teammate were playing against each other. Did we talk a lot about this week? Not too much. But I’m proud of Justin’s composure. He could have easily tightened up or tried too hard or taken it really personal between the two of them. And he didn’t.”

NOT-SO-RANDOM SELECTION FROM THE 1993-94 JUKEBOX

Joe Mihalich on Wright-Foreman coming close to 40 points: “As a coach, those video boards…there’s a little too much information up there. Too much that these guys can see up there.”

WAS THIS A UNICORN SCORE?
No! But 80-71 doesn’t happen as often as you might think. This was Hofstra’s first 80-71 win since the Flying Dutchmen, who were really known as the Flying Dutchmen back then, beat Columbia on Jan. 6, 1990. I didn’t even know what a Hofstra was!

ALL BY HIMSELF
Justin Wright-Foreman recorded his second 30-point game of the season Wednesday night, when he poured in 37 points, the second-highest figure of his career. It was also Wright-Foreman’s 13th 30-point effort, which broke a tie with Demetrius Dudley and Charles Jenkins for the most by the most by a Hofstra player since the 1989-90 season. But Wright-Foreman has played just 95 games and registered all of his 30-point games in his last 54 games dating back to Jan. 2, 2017. Here is the list of all players with multiple 30-point games since 1989-90 (career games in parenthesis).

ALSO ALL BY HIMSELF
Per Hofstra SID Stephen Gorchov, Justin Wright-Foreman (28 ppg, 5.1 rpg, 4.2 apg is the only player in the country averaging 25 points, five rebounds and four assists per game.

ALMOST ALL BY HIMSELF
Justin Wright-Foreman had at least 25 points five rebounds and five assists Wednesday for the sixth time in his career. All six efforts have come since the start of the 2017-18 season.

The six 25/5/5 games ties Wright-Foreman with current assistant coach Craig “Speedy” Claxton for the most by a Hofstra player since at least 1994-95, when the Hofstra media guides began displaying a player’s points/rebounds/assists lines from the previous season. Here is the full list of players with at least one 25/5/5 game since 1994-95:

ONCE AGAIN ALMOST ALL BY HIMSELF
With his 37 points Wednesday night, Justin Wright-Foreman extended his streak of double-digit scoring efforts to 58 straight games, which ties him with Charles Jenkins for the longest streak by a Hofstra player since 1989-90 (as far back as my records go, at least at home). Which means, if my math is correct, Wright-Foreman can surpass Jenkins tonight, In addition, Wright-Foreman’s streak is the fourth-longest active streak in Division I, per Hofstra SID Stephen Gorchov.

JWF IS A TOP TEN HIT
With his 37 points Friday, Justin Wright-Foreman remained in 10th place on the all-time Hofstra scoring list. To be fair, he needed to score 158 more points to move up the list and pass Norman Richardson for ninth place.

VISTOR MAKES HIMSELF AT HOME
Cal State Fullerton senior Kyle Allman Jr. led all scorers Wednesday night and tied a Hofstra Arena visiting player record by collecting 38 points. Keydren Clark of Saint Peter was the first visitor to score 38 points on Dec. 23, 2003, when the Dutchmen beat the Peacocks 87-77. Rider’s  Ryan Thompson matched Clark on Feb. 20, 2010, when he scored 38 points in the Dutchmen’s 90-87 win. The 75 combined points between Allman and Justin Wright-Foreman are the most by a Hofstra player and an opponent in a game played at the Arena, which opened in January 2000.

TWICE AS NICE
Per reader Evan Jones, the dual impressive efforts by Kyle Allman Jr. and Justin Wright-Foreman mark the first time a player on each team scored at least 37 points without the benefit of overtime since Feb. 27, 2016, when San Diego’s Duda Sanadze scored 38 points and Portland’s Bryce Pressley scored 37 points in San Diego’s 85-76 win.

OVER THE AIR
Tonight’s game will be aired on ESPN+. Hofstra will offer live audio and live stats here.

VCU AND THE CAA, ERR, ATLANTIC 10
You might remember VCU from such games as at least one per year between 2001-02 and 2011-12! This will be the first game between the Dutchmen and Rams since VCU left for the Atlantic 10 following the 2011-12 season. Hofstra is 5-15 all-time against VCU, which won the final eight games between the clubs while they were CAA rivals. The Dutchmen last beat the Rams on Jan. 31, 2007.

VCU is the first of the former CAA schools (Old Dominion, George Mason, Georgia State) to face Hofstra since realignment wrecked what was a great league. The Rams are the first of two former conference foes the Dutchmen will face this season. Hofstra and Rider were in the ECC, though Litos probably thinks I’m making that up.

VCU is 4-1 this season after a last-second 87-86 overtime loss to St. John’s in the finals of the Legends Classic at Barclays Center Tuesday night. Yeah, a lot has changed since the last time these two teams faced each other.

Hofstra and VCU have two common foes this season: College of Charleston and Rider. The Dutchmen are scheduled to host Rider Dec. 8 before facing Charleston in CAA play on Jan. 19 and Feb. 14. The Rams will host Charleston Dec. 15 and Rider Dec. 30.

VCU, which had its streak of NCAA Tournament appearances snapped at seven years last season and did not play in a postseason tournament for the first time since the 2005-06 campaign, was picked to finish seventh in the Atlantic 10 this season. Spoiler alert: They are better than that. Junior guard De’Riante Jenkins was selected to the preseason all-A10 third team. The Rams are led thus far by junior forward Isaac Vann, who leads VCU with 14.6 points and six rebounds per game.

Hofstra is 36-103 all-time against current Atlantic 10 schools but will enter tonight on a one-game winning streak thanks to a 72-69 win over Dayton in the Charleston Classic Nov. 16, 2017. In addition to VCU, the A-10 includes former Hofstra conference foes George Mason (CAA) and LaSalle (ECC).

THINGS YOU CAN SHOUT ON TWITTER IF CALLS GO DO NOT GO HOFSTRA’S WAY
Southern bias! (Because the classics never go away)
VCU Pav bias! (The VCU superfan is a great friend to us)
If you don’t like Defiantly Dutch blame it on Mike Litos bias! (The #CAAHoops grand poobah and VCU grad is now an analyst on VCU radio)
Eric Maynor dagger bias! (Best moment in CAA history?)


You ran Jim Larranaga from the CAA bias! (No, that was the best moment in CAA history)
Posted by Jerry Beach at 6:37 PM