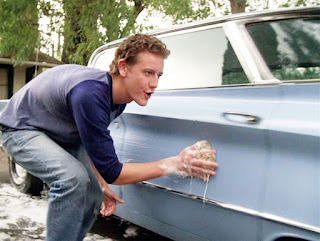 Will good ol' American boy Judge Reinhold be listening on his favorite toy tonight to Hofstra-Delaware? (Also, I'm very mature, for I could have used a very different picture here)

The Flying Dutchmen went into the CAA Tournament on a winning note last Saturday, when they pulled away in the final four minutes to edge James Madison, 71-66. The Dutchmen will open (but hopefully not close!) CAA Tournament play tonight when they wear the home duds against ninth-seeded Delaware in North Charleston. #ThanksTom Here’s a quick look bak at the win over the Dukes and a look ahead to the Fighting Blue Hens.

THE MOST RECENT GAME SUMMARIZED IN ONE PARAGRAPH
Jamall Robinson’s 3-pointer with 3:37 remaining gave the Dutchmen the lead for good and keyed a game-ending 15-9 run. Five different players scored in the run for the Dutchmen. Justin Wright-Foreman was just 8-of-23 from the field, including 1-of-10 from 3-point land, but still once again led the Dutchmen in scoring with 19 points, including 15 in the second half. Rokas Gustys (15 points), Deron Powers (13 points) and Eli Pemberton (11 points) also scored in double figures. Gustys added a game-high 14 rebounds as he posted his third double-double in four games.

EIGHT WILL HAVE TO BE ENOUGH
The Dutchmen will be the no. 8 seed in this weekend’s CAA Tournament and will face ninth-seeded Delaware tonight at 6 PM. The winner of tonight’s game faces top-seeded UNC Wilmington Saturday at noon. The Dutchmen and James Madison each finished 7-11, but the Dukes drew the seventh seed by virtue of a win over third-seeded Towson, which swept Hofstra.

The Dutchmen are the eighth seed in the CAA Tournament for the third time since joining the league in the 2001-02 season. The Dutchmen went 1-1 as the eighth seed in 2014, when they beat UNC Wilmington 78-70 in the lone outbracket game before falling to eventual champion Delaware 87-75. In 2008, the Dutchmen dropped an 81-66 “Pillowfight Friday” decision to Towson.

SLOW START, FAST FINISH
The Dutchmen became only the second team in CAA history to finish with seven league wins after opening 1-6 or worse through seven games. William & Mary opened 1-6 and finished 7-11 in 2012-13. The Tribe lost its opening game in the CAA Tournament to eventual champion James Madison, 72-67.

The previous 22 teams to open 1-6 or worse finished with an average of 3.5 CAA wins.

Hofstra is 2-4 in conference tournament games against Delaware, with both wins coming in consecutive America East championship games.

ONCE, TWICE, THREE TIMES A VICTORY?
The Dutchmen swept Delaware in the regular season series. While the idea that it’s hard to beat a team three times in one season is a popular cliche, a CAA team that swept the regular season series is 44-17 in a tournament re-rematch since 2001-02. However, the sweeping team is just 5-5 in a third meeting over the last two years.

Since joining the CAA, the Dutchmen are 5-0 in a third tournament game against a team they swept in the regular season.

LEADER! WE LOVE THE LEADER!
Justin Wright-Foreman held at least a share of the team scoring lead Saturday for the 11th straight game, which is the longest streak by a Hofstra player since Charles Jenkins ended his collegiate career by at least sharing the team lead in points for 11 straight games from Feb. 2, 2011 through March 15, 2011.

CASHING IN FREE THROWS
Brian Bernardi missed his first free throw of the conference season Saturday, but Justin Wright-Foreman drained both free throws against James Madison and has now hit his last 26 attempts dating back to the second half of the Northeastern game on Feb. 11. Bernardi and Wright-Foreman’s streaks are the longest by a Hofstra player in at least five seasons.

WRIGHT-FOREMAN’S SOPHOMORE SURGE
Justin Wright-Foreman has played at least 10 minutes in every game but one this season and has scored in double figures in 25 of 31 games, including the last 21. He scored more than four points and played more than 10 points in just one game last season, when he collected nine points in 17 minutes against Division II Molloy.

Wright-Foreman, who scored 44 points in 27 games last season, has scored 557 points this season, which is already the third-most by a Hofstra sophomore in the CAA era. He is 10 points away from Antoine Agudio into second place.

WRIGHT-FOREMAN GOING NATIONAL
With 557 points this season, Justin Wright-Foreman enters today tied for 19th among sophomores in scoring, according to College Basketball Reference. The only player ahead of him who scored fewer than 100 points as a freshman last season is Albany’s David Nichols, who scored 40 points in 15 games last year but enters today ranked 11th among sophomores with 577 points.

GUSTYS MOVING ON UP
Junior forward Rokas Gustys is just three rebounds away from moving past David Taylor into third place on the program’s all-time list. Only Taylor and John Irving (1974-77) have collected more rebounds during Hofstra’s Division I era.

OVER THE AIR
The CAA will provide a video feed of today’s game while Hofstra will provide a radio feed at the Pride Productions hub.
SCOUTING DELAWARE
The Blue Hens, under rookie head coach Martin Ingelsby, finished the regular season 12-19 overall and 5-13 in CAA play. Delaware suffered its third straight loss Saturday, when it fell to Elon, 81-59.

The Dutchmen and Blue Hens had one common foe during non-league play. The Dutchmen beat Bradley 92-90 on Nov. 21 while the Blue Hens knocked off the Braves, 63-49, on Nov. 13.

Per the wise guys in Vegas, for entertainment purposes only, the Dutchmen are 9.5-point favorites.

The Dutchmen swept the regular season series from Delaware by edging the Blue Hens 58-56 in New-ARK on Dec. 31 and coming back from a 14-point deficit to earn a 73-65 victory at the Arena on Feb. 2.

The Dutchmen are third among CAA teams in scoring (77.3 ppg) but are allowing 76.5 ppg, the third-most in the league.

The Blue Hens ranks last in the CAA in scoring (64.3 ppg) and are allowing 71.4 ppg, which is fourth in the league.

ALL-TIME VS. DELAWARE
Hofstra is 54-31 against Delaware in a series that began during the 1954-55 season. The only other school Hofstra has faced as often is Drexel, whom it has also played 85 times. Hofstra and Delaware were rivals in the East Coast Conference and the North Atlantic Conference/America East before heading to the CAA, along with Drexel and Towson, for the 2001-02 season.

The Dutchmen have won the last six meetings with Delaware. The current winning streak by the Dutchmen comes immediately after Delaware won seven straight from 2011-12 through 2013-14.

REPLACING THE MISSING SCORING—AND THEN SOME
The Dutchmen lost a whopping 50.3 ppg from last year’s squad via the graduations of Juan’ya Green (17.8 ppg), Ameen Tanksley 15.9 ppg), Denton Koon (11.4 ppg) and Malik Nichols (5.2 ppg). But they have “found” 56.1 ppg this season via five players who didn’t play for the team in 2015-16, plus the emergence of sophomore Justin Wright-Foreman.

PEMBERTON HITS THE TOP 5
Eli Pemberton, who was the first Hofstra freshman since Antoine Agudio (2004-05) to open his career by scoring in double digits in his first five games, is the 19th Dutchmen freshman in the CAA era to score at least 100 points in his debut season. He broke a tie with Loren Stokes for fourth place on the CAA-era freshman scoring list last Saturday.

THINGS YOU CAN SHOUT ON TWITTER IF CALLS GO DO NOT GO HOFSTRA’S WAY
Mike Brey mock turtleneck bias! (The Notre Dame coach and successor to George Steinbrenner as America’s finest wearer of mock turtlenecks coached at Delaware from 1995 through 2000)
Bad to the Bone bias! (George Thorogood hails from Delaware)
Dallas Green bias! (The former big league manager and executive is a Delaware graduate)


Judge Reinhold bias! (Per Wikipedia, which is never wrong, the Fast Times At Ridgemont High icon and recent arrestee is from Delaware)
Posted by Jerry Beach at 5:29 PM