The thrill of the chase 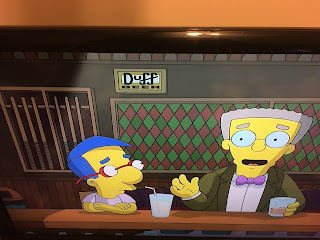 “Let me tell you about dames, Milhouse. I know nothing about ‘em. But as for love, what keeps you going is the thrill of the chase, the possibility that one day you might get what you want, even though the reality is you probably never will.”—Waylon Smithers, “The Burns Cage,” first aired 4/3/16

As fans of mid-major college basketball programs, we spend 51 weeks out of the year occupying the bodies of reasonably normal people driven by logic and data (shut up, really). The heart swells and the imagination races at championship possibilities, but the brain always calmly gallops in behind those endorphins and delivers the reason that quiets those happy thoughts.

We are at our most logical and cynical as the 52nd week approaches. With unavoidable heartbreak on the horizon, our nerve endings flare at the slightest irritation and remind us what awaits.

The Flying Dutchmen’s final homestand two weeks ago was filled with such moments, even when I was a couple hundred feet away from the court. At halftime of one of the games, I went to the snack bar and saw two people wearing Golden State Warriors T-shirts/jerseys with Charles Jenkins’ name and number on the back.

I have a Jenkins T-shirt in my bureau, so I didn’t need more evidence we were so close to getting in on the ground floor of the most amazing NBA renaissance of the century. But Jenkins got traded during the season in which the Warriors made the playoffs for just the second time in 19 years and less than two years before the franchise won the NBA title. Of course.

Our lot in life is to be teased with potential payoff immediately before more torment, as we were reminded during the final two home games against Charleston and UNC Wilmington. The Dutchmen trailed the CAA’s top two teams by double digits in the second half but had the ball with a chance to take the lead in the final minute of both games.

Against Charleston, there was no foul called when Justin Wright-Foreman got hacked on a potential go-ahead 3-pointer with 10 seconds left. The Cougars ended up winning by four. Two days later, Brian Bernardi got an open look at a potential game-tying 3-pointer. From my vantage point right behind the basket that I yelled “THAT LOOKS GOOD!” But it bounced off the top of the rim.

It evoked memories of the final seconds of the CAA championship game a year ago Tuesday night. With the Dutchmen and UNC Wilmington tied, I was seated near midcourt as Juan’ya Green dribbled up the floor before hoisting a prayer from well beyond the 3-point line. “THAT’S GOT A SHOT!” I yelled, my heart and imagination having completely overtaken the brain that had watched Green suffer the worst game of his career. The shot was off the mark, of course, and the Dutchmen went on to lose by seven in overtime, and it somehow seemed like they’d lost by a lot more than that.

The Dutchmen lost by eight this time, because of course each loss has to outdo its predecessor in some way, shape or form. And as I exited the Arena following the loss to UNC Wilmington, I’d come to accept the fate of the 2016-17 season. I took some solace in the fact it didn’t unfold as badly as it started — the Dutchmen began CAA play 1-6 — and found strange comfort in the familiarity of the tale. The 2001-02 and 2007-08 teams both stumbled after losing multiple players from an NCAA Tournament (or, sigh, NCAA Tournament-caliber) teams before rebuilding into CAA contenders. Hopefully that lay ahead too.

Except week 51 happened, during which the Dutchmen went on the road and beat William & Mary with a game-ending 15-0 run before edging James Madison. These two wins did nothing to improve the Dutchmen’s seeding — they’re the eighth seed and will face ninth-seeded Delaware in the first game of the tournament tonight at 6 PM — and everything to improve our psyche heading into the weekend.

It’s the same psyche we have every year at this time, isn’t it? Long before #alternativefacts somehow became a real thing, we were well-versed in reading carefully selected tea leaves, convincing ourselves we were seeing what we wanted to see and molding, twisting and contorting the data until it offered up a conclusion that backed up our thesis.

We know the road the Dutchmen must travel to a championship has never been navigated. The gauntlet of the CAA season usually foretells how the tournament will unfold. Twenty-seven of the 34 champions entered the tournament seeded first or second and none of the handful of champions seeded third or lower won the title by winning four games in as many days.

In addition, no eighth seed has gotten as far as the semifinals since the league expanded to 10 teams in 2001-02, and no top seed has lost its first game since 1991, when James Madison was upset by Navy in a tournament that included just eight teams.

The task seems doubly difficult this season with UNC Wilmington awaiting if the Dutchmen win tonight. The Seahawks are the first CAA team with the “it” factor since the exit of VCU, Old Dominion and George Mason. They have swag, they have the clutch gene and they are playing for history.

With a second straight title, UNC Wilmington will join the pantheon of all-time CAA teams. The Seahawks could lose this weekend — they are playing at a “neutral” site that favors second-seeded Charleston — but it’s hard to envision it happening in their opening game.

Even if the Dutchmen win tonight and tomorrow, that still only puts them halfway there. A more-rested William & Mary or Elon would await on Sunday, with either Charleston or Towson — a pair of physical teams — the likeliest teams to advance to Monday’s title game from the other side of the bracket. Tall task, to say the least.

And yet…if a team is going to pull this off, wouldn’t it have a composition similar to the one possessed by the Dutchmen? Justin Wright-Foreman has emerged, to the complete shock and amazement of everyone, as a Jenkins-esque scoring machine capable of carrying a team on his back. After an injury-plagued season, Rokas Gustys is playing like the first-team all-CAA player he was expected to be in October. Deron Powers is a fifth-year senior point guard who led sixth-seeded Hampton on a Cinderella run to the MEAC title two years ago. Eli Pemberton and Brian Bernardi run hot-and-cold, but both players have the ability to drain several 3-pointers in a game.

The Dutchmen finished 7-11 in the CAA, but they were eyelashes away from being a .500 team or better. You remember the Daniel Dixon-caused funk and four missed tap-ins just before the overtime buzzer against Drexel, don’t you?

“We’re finally the team we thought we would be at the beginning of the year,” Joe Mihalich said this week. “We had a stretch there where Lady Luck wasn’t so good to us and Mother Nature wasn’t so good. I always say at the beginning of the year, I kid that you need the two women in your life to be good to you. And Lady Luck and Mother Nature, both of those women were unkind to us.”

Plus, the #narrative is properly dramatic. The Dutchmen’s potential path to Monday night includes their longest rival, the program that beat them in the title game last season and their most bitter current rival, After all that, upending the local favorite, a fellow ECC school or a fellow Northern Bias Alliance member.

Everything has to go right, and we’ve been doing this long enough to know that doesn’t happen for Hofstra. But why not this year? For the 16th straight year, why can’t we ask why not us? Why can’t chaos finally break out in the CAA Tournament? Ken Pomeroy gives the Dutchmen a 2.2 percent chance of winning the tournament. But why can’t projection models have another bad weekend in a year full of bad weekends? Why can’t we hope the answer to “why not us?” is finally delivered with an exclamation point?

For the last time this season, the thrill of the chase begins again tonight. It’ll probably end as it always does, in heartbreak and angst and various shades of why-do-we-put-ourselves-through-this and a promise to not get swept up in long-shot scenarios next year.

But for now, the possibility still exists that the one day we might get what we want still remains out there, and that one day might be Monday. Our dame is college basketball. Let’s take her for a spin and see what happens, shall we?