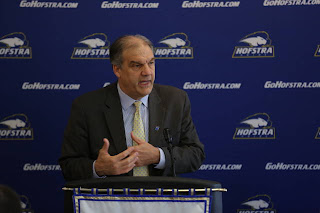 Joe Mihalich sat down with a handful of ink- and pixel-stained wretches for an informal Q&A this afternoon at Hofstra’s University Clun. Here’s an edited transcript of his chat.

We were gonna be good next year up there. Great bunch of guys. Believe me, I spoke to the team last night. It was one of the toughest things I ever did in my life. There’s no way to keep it together during that. So I wasn’t looking. As I said [at the podium] and I said it many times, when people asked me up there ‘You gonna leave? You gonna leave?’ I would only leave if it was a great opportunity—great school, all that stuff. Here’s a chance to do something else. Is the timing perfect? That’s life. That’s life. You can’t choose opportunity the opportunity comes and then you have to make a choice. Do I wish everybody had graduated and nobody was there? I wish, but that’s not the way it was. It was too good an opportunity to pass up.

I sat down with Jeff, we met down in Atlanta, and the more he talked, the more excited I became. Came down yesterday and with each person I met I got more and more excited. Been on campus [before] but never saw it the way I saw it yesterday. I didn’t need the plane last night, I just could have flown home myself.

On meeting with the remaining Hofstra players:

On his staff and if he’ll bring anyone with him from Niagara:

On his style of ball:

We like to play fast. You’ve got to dance with the girl you brung, so we’ll see what kind of guards we can bring in here. We bring in guys that still keep that 10-second rule in effect to get the ball over half-court, we won’t be running much. But we do like to play fast. I played for Paul Westhead in college, coached with Morgan Wooten and Speedy Morris I think the up-tempo style is fun. Fun to play that way, fun to coach that way, it’s fun to watch. We’re hoping to have an up-tempo type of team, hope it’ll be high-scoring, but again, we’re an incomplete picture right now. We’ve got some pieces to put in the puzzle.

On what attracted him to the job despite the short-term struggles Hofstra may have:

We’ve got to get some players. I was on the phone this morning and I think we’re close to a guy already, actually. So trying to close the deal with a couple guys. There were some verbal commitments, I’m reaching out to those guys. And my message to them is maybe the most important part of the reason for your commitment was to the university itself, and that hasn’t changed. This is still a fantastic university. I know the coaches changed, and that’s [why] we’ve got to get to know each other to hopefully complete that.

On the challenge ahead:

That’s what excites you. If you didn’t—maybe it’s the wrong word—but if you didn’t like that it was a bad situation—and again, that’s a poor choice of words—but that’s a challenge. It’s a tough situation, it’s going to be more gratifying, it’ll just be more gratifying when you surprise everybody. One of my idols is a Niagara guy, Frank Layden. He always says ‘It’s better to surprise ‘em than disappoint ‘em.’ And so our goal is going to be to surprise everybody and be better than what they thought we were going to be.

Jeff explained the situation, whether it was the number of scholarships remaining, verbal commitments, APR situation—he explained everything. So it’s not the perfect situation, but again, we’re not going to talk about our problems. I mean, I love that Lou Holtz saying, it’s the truth. It really is. ‘Half the people don’t care, the other half are glad you have [problems].’ So we’re not going to do that.

On building his type of team:

Continuity is important, it really is, and Jeff Hathaway convinced me that he wants to do this the right way. He knows it’s going to be brick by brick. Sometimes, when you go for a quick fix, you take chances, they don’t work out. We’re going to be very careful about doing things the right away.

I like to play fast, so you look to speed, you look for quickness, as opposed to big, bulky guys, IF they have both, they’re [going] to the ACC, right? So probably speed and quickness more than anything else. I’ve got no problem with a guy who can make a lot of shots, It’s easier to count by 3s than by 2s.

On his hectic travel schedule leading into Wednesday:

I was going to leave [the Final Four] Sunday, Jeff asked me to stay down the day to visit. So I changed my flight to Monday morning. Monday morning flew from Atlanta to Buffalo. Tuesday back and forth, Buffalo to JFK. This morning, [got up at] 5:45, I was with my staff all last night, went to bed about 3, got up at 4. Sleep’s overrated. And then I don’t know when I’m getting home. I’m going to stay down here until I get three guys that can play.

More on his final meeting with his Niagara players:

I went back to speak to the team. I think that’s the right thing to do, is go do it in person. And believe me, it was as emotional a tine as I’ve ever been through in my life. I love those guys, I love that team. It was a hard thing to do. And as I’ve said a couple times before, that speaks to how excited I am about this opportunity, because it would have been easy to say you know what, I’m just going to stay here.

On his timetable to compete in the CAA:

On if, after having just two jobs in the last 32 years, he sees Hofstra as a place at which he can retire:

When you’re a basketball coach you just think about one season, one year—not that you don’t build for the future—but one season, at a time, one year at a time. I don’t think you really plan too far ahead.

On how much he enjoys coaching:

I love what I do. I’m so lucky to do what I do. I say it everyday: I’m living the dream. I pinch myself everyday that I get to be a basketball coach. And I want everybody that I’m with to be having fun and enjoying it. Its not that it’s not hard work, not that you don’t feel like punching the wall once in a while, But I want my coaches to be that way, I want my players to be that way. I think it’s a culture that you want to build. It’s a lot better to be good and having dun doing what we’re doing. I have fun. People look at me after a game…you’ve got to understand something I am having the time of my life. Maybe we lost by one on a last-second shot and I’m not going to sleep that night. But to be coaching—just so lucky, just so lucky.

More on meeting with Hofstra’s players for the first time:

My goal wasn’t to earn their trust. My goal was just to let them know who I was and what I stood for and what I was all about. And I wanted to know what they were about, And if the trust comes with it, that’s great. But I didn’t go in there and say ‘I’ve got to earn their trust.’ I just went in there and I wanted them to feel comfortable with me. [That’s] the first thing I want to do with the players, because those poor kids have been without a coach for three weeks and they don’t know what’s going on. They don’t know who’s coming, what to expect. I’ve got three sons. If they were going through that, I’d feel horrible for them. So they needed some reassurance that they were going to be OK. And I tell you what, I was so impressed. What a great bunch of guys.

On what he’d say to a fan base reeling after the last few years:

On his memories of playing Hofstra at La Salle from 1975-78:

Richie Laurel getting about 50 on us one time. Roger Gaeckler was the coach, I think it was 1976[-77] they came to the Palestra and beat us. That wasn’t supposed to happen. [Grins] Richie was from Philly, so he was extra juiced. He was great. They had a good team.

We’re going to recruit anywhere and everywhere. When you are where I was for 15 years, you have no restrictions. You answer every email and you make every phone call. You look at every tape that comes in. And if there’s a genuine mutual interest, you pursue it. We’ve had kids from Texas, Florida and California.

I remember him when he was in high school and college. Played at Bucknell. I remember one time, he was working at Drexel, I was working at La Salle [and] we had to drive to Pittsburgh, Drexel had a station wagon that they let the coaches use called the “Dragon Wagon.” He drove and it was just one of those things you remember, the trip out to Five Star. We just talked the whole way He’s just a first-class guy. Obviously a fantastic coach, but he’s a better person than coach.

Really, I think [Wright is] probably why I was familiar with [Hofstra]. Always liked him and always knew it could be a great place.

Email Jerry at defiantlydutch@yahoo.com or follow Defiantly Dutch at http://twitter.com/defiantlydutch.
Posted by Jerry Beach at 8:12 PM