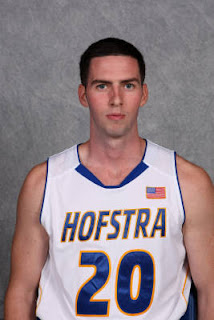 Matt Grogan made a bit of history this season, when he became the first four-year walk-on at Hofstra since Tom Marich played on Jay Wright’s first four Flying Dutchmen teams from 1994-98.

But it wasn’t supposed to be that way.

“Pecora was a big reason why I came here,” Grogan said. “He saw me play at [Archbishop] Molloy [in Queens], had a good game there. He got in touch with me, I came down here for a visit. He said ‘Come down here for a year and we’ll try to get you a scholarship for the remaining three years.”

“We know how that story went.”

Pecora, of course, left for Fordham following Grogan’s freshman season, which set in motion a wild chain of events that allowed Grogan to see far more playing time than any Hofstra walk-on in at least the last 20 years. Grogan has played 505 minutes over 77 games, including 430 minutes in 50 games the last two seasons. For comparison’s sake, Marich played 152 minutes in four seasons.

Grogan has scored five or more points six times this season and nine times in the last two years. He enters tonight’s home finale—where he is likely to earn his first career start and become the first walk-on to start since Ryan Johnson in 2008—with 95 career points, easily the most for a walk-on in the last 20 years. (Anthony Noble scored 85 points in his lone season as a walk-on in 2002-03 before transferring to Stony Brook).

Of course, Grogan didn’t get all this playing time by design. He played just three minutes in the first seven games of this season before the arrests of the knuckleheads forced him into the rotation.

And of course anyone would prefer a scholarship over paying his own way to school and commuting from Queens everyday, as Grogan has done the last three years.

But Grogan, in the uniquely forthright and hilarious manner that has endeared him to three coaches and what amounts to two generations worth of teammates, made it clear Tuesday that he wouldn’t trade his Hofstra experience for anything.

“I’m here all day anyway, I just basically sleep at my house,” Grogan said. “I got used to it. Just feel like it was normal. What else would I rather be doing? Working? Nothing to complain about.”

And what about those nights when the Dutchmen get back late from a road trip and he’s too tired to drive home?

Grogan is as quick to speak eloquently of his time with the Flying Dutchmen as he is to crack a one-liner. He said he considered transferring to a Division II school after Pecora left, but didn’t want to leave behind the friends he’d made as a freshman—including fellow senior David Imes, whom he’s known since the two played youth ball as pre-teens.

Plus, as he puts it: “Not too many people can say they played at a Division I school, whether they’re a walk-on or not.”

He is self-aware over his role and often-sparse playing time (“At the end of the day, they’re going to play the scholarship players first, they’ve invested a lot of money in these guys”), but also appreciative of the camaraderie he’s developed with his coaches and teammates, all of whom have made him feel like a scholarship player.

“From the moment I stepped in here, when Pecora recruited me, I was in practice everyday,” Grogan said. “I wasn’t standing on the sideline. I don’t know how it is at other schools, I’m sure some of those walk-ons don’t even get to travel.”

Grogan is most appreciative of the doors that may open to him because of his four years with the Flying Dutchmen. A management major and regular member of the honor roll, Grogan doesn’t know what kind of job he’ll pursue after graduation, but knows that the biggest part of his resume has nothing to do with his class work.

“The best thing on my resume now is the Hofstra basketball team,” Grogan said. “Everybody loves sports.”

He leaves behind no shortage of references at Hofstra.

“He’s had to wear so many hats, from practice player to going into a game and asking him to make shots to being a defensive guy and a scout guy,” Cassara said. “Just worn so many hats. I couldn’t think of a guy that I’d rather be around and be more proud of than Matt Grogan. He exemplifies everything that college basketball is all about. He comes to work everyday, he gets his education, he embraces the community and is just a terrific young man.”

Email Jerry at defiantlydutch@yahoo.com or follow Defiantly Dutch at http://twitter.com/defiantlydutch.
Posted by Jerry Beach at 5:52 PM