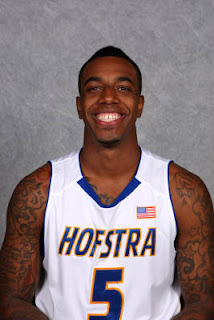 Few Flying Dutchmen players of this or any other era have put together a more varied and interesting career than David Imes. He went from little-used benchwarmer as a freshman—when he missed 13 games due to injury and averaged 6.3 minutes per game—to an every-game starter in his final three seasons, a stretch in which he has played 89 out of a possible 94 games and averaged almost 29 minutes per contest.

Imes played power forward and center in his first three seasons before spending much of this season as a ball-handler and shooting guard for a Dutchmen squad that lost all of its guard depth following the arrests of the knuckleheads. Imes is one of only three Hofstra players since 1989-90 to have a 15-rebound game as well as a five 3-pointer game on his resume. (Imes twice had 17 rebounds as a sophomore and drained five 3-pointers against Northeastern on Jan. 16).

He played on one of the most memorable Flying Dutchmen teams of all-time, the 2010-11 edition that Charles Jenkins carried to 21 often-dramatic wins. And he has endured a rough final couple seasons in which the Dutchmen have won a total of 17 games while battling injuries and the fallout from November’s burglaries.

“A guy that I hold very dear to my heart on a lot of levels,” Mo Cassara said. “I can remember sitting in the pizza shop talking to him right after I got here. Here’s a guy who hadn’t played much at all and was trying to kind of find his way in college basketball and find his way here. We got married together through unusual circumstances and he’s played every game that he’s been healthy [for] and played a lot of minutes.”

“He’s a gentleman and a guy who’s going to be successful in life. Certainly very proud of him and what he endured and went through during an up and down and challenging couple years.”

Imes’ Hofstra career has been just as interesting and varied off the court. The father of two daughters (ages four and one), Imes has juggled college, basketball and fatherhood during his time in Hempstead. While he lives on campus, he often heads to Brooklyn or Manhattan for early-morning or late-night visits with his family.

“Challenging [and] rewarding,” Imes said of parenthood. “There’s days that I just want to be home with my family and I can’t  because we have a 6 a.m. practice. Then there are some days where I’m just glad to be able to do this and to say I got this far as a father.

“I’m happy I got through it and happy I’m able to show that it’s possible, so that people that are my age out there making excuses [about parenthood]—I just want to show them that it can be done,” said Imes, who credited his Mom, Sandra, for helping him out with babysitting and other duties when he couldn’t be home.

A linguistics major, Imes plans to put his degree to use by playing overseas. He has already been drafted by a team in Spain that is coached by Flor Melendez, who is the coach of the Puerto Rican National Team. Imes, whose mother’s family is from Puerto Rico, hopes to parlay the experience with Melendez into a tryout for the National Team

Imes, who played little power forward or center in high school, welcomed the chance to diversify himself again prior to this season, especially with the knowledge that 6-foot-7 players who can run the floor and drain outside shots can make a good living overseas.

“I knew that if I wanted to [keep] playing this game in the future that I needed to be able to play another position, multiple positions,” Imes said.

Imes’ hopes for a storybook ending at Hofstra likely went out the window in November, and he admitted Tuesday that he was badly shaken by the turn of events that turned his senior season into another rebuilding effort.

“It hurt, because we expected so much from our last year,” Imes said. “Our roster and the people we had coming in, the transfers we hoped [would] be cleared to play, Jamal hopefully getting healthy. Just had so many big expectations. Everything started taking a rollercoaster ride downhill. It was hard to deal with.”

Against Old Dominion on Sunday, Imes scored 15 of his game-high 18 points in the second half to lift the Dutchmen to a come-from-behind victory.

“I just see it as my last few games—gotta go out as hard as I can,” Imes said.

Nostalgia began creeping in for Imes on Tuesday as he looked ahead to tonight’s final start at Hofstra Arena—the final chance to play at home alongside longtime friend and fellow four-year senior Matt Grogan and one of his last chances to feel the pride (again, pardon the pun) at being the lone scholarship recruit from Tom Pecora’s last recruiting class at Hofstra to play all four years for the Flying Dutchmen.

“We talk about freshman year, we talk about sophomore year with our last year with Charles,” Imes said of his conversations with Grogan. “We look at pictures and go ‘Look, oh my God, how time flies.’ We look upstairs in the office and see the changes, the whole staff and how much we’ve been through together. Just happy we stuck it out.”

Email Jerry at defiantlydutch@yahoo.com or follow Defiantly Dutch at http://twitter.com/defiantlydutch.
Posted by Jerry Beach at 5:53 PM