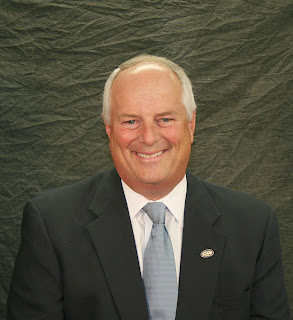 Well, of all the people I expected to see when I rolled out of bed this morning, Tom Yeager was about last on the list. But there he was in Hempstead for the Jeff Hathaway press conference while VCU prepared for its own press conference announcing its immediate departure for the Atlantic 10. Yeager was kind enough to give us a few minutes of time to discuss the state of the CAA. As always, we have it better. Here is our conversation.

If what we're all reading on Twitter is correct, there's some pretty big CAA news about to happen, What brings you here today?

Well, it's a combination of things. President Rabinowitz is chair of our council of presidents. We have our annual meetings coming up, so it was a chance to kind of dovetail the two of them together. And what you're hearing is correct.

Mason didn't. And over the next couple of weeks, VCU made up their mind to leave.

Were you surprised by their departure?

Was coming here today a sign of support for those schools that aren’t going anywhere?

No, no. I was coming here. The VCU thing just developed after this was scheduled.

This go-around is so much more widespread. Back then, it was more limited. This round, there's a near-hysteria on some fronts and people jumping around. It's going to take time to see [the results]. There have been a lot of decisions being made for all different kinds of reasons. Time will tell which ones were good.

You talk about the results telling the tale. Are you galvanized now by the success the CAA had after 2001?

Yeah, oh yeah. Oh yeah, sure. In 2000 people were saying the grave was dug. They were shoveling dirt on us. We did OK. We had national champions, two men's basketball Final Fours, we had a record number of teams in other sports participating [in the NCAA Tournament]. When you start with good universities that have good leadership, good coaches and good student-athletes, I'll take that. I'll take that right now.

We have a ton of guys—Justin Verlander, he played here. Joe Flacco played here. Marques Colston. You've got them all and we have tons of soccer kids out there [playing professionally]. We're going to have a bunch of people in the Olympics. And most or all of them are graduates. I can think of a worse fate in life than that.

I know there's not much you can probably say about this, but do you have a timetable for getting back to 12 and/or a geographical area you'd like to tackle?

This is part of the evaluation everybody's doing. I think we want to look first and foremost at institutions that bring something to the table. You just don't want to fill out [and say] 'OK let's get back to 12 and let's pick two.' You want to have somebody that brings a requisite amount of assets and contributions to the good of the group.

Have you thought about next year's men's basketball tournament and how it will play out in terms of scheduling?

There's no Friday games at this point. Get back to the old days—just everybody lays three games. You're in and out.

You seem calm about this. Does your stomach churn at night thinking about all the possibilities?

Yeah, absolutely, I didn't sleep very well last night in the hotel. Because [he's] more emotionally invested in this stuff. I've been doing this a long time at this place. Got a lot invested in what we built. And people saying bad things about you—your girlfriend just dumped you, your wife just said 'Ahh, I'm gonna go hook up with somebody else.' Yeah, it's not a good day. But you know what? It's a disappointing loss. There's another game next week. So get ready to play.

Great candor from the commish...