Get To Know: Allen Griffin 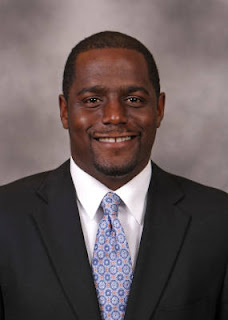 This season marks the first time Hofstra has an entirely new men’s basketball staff since the 1994-95 season. Fans are already well-acquainted with head coach Mo Cassara, but we sat down last week with the rest of his staff—Steve DeMeo, Allen Griffin and Wayne Morgan—to get to know them a little better. We’ll unveil these introductory Q&As once a week for the next three weeks. (We profiled Wayne Morgan last week)

Second in our series is Griffin, who was recruited to and played for Morgan at Syracuse, served along with DeMeo on Tim Welsh’s staff at Providence and was most recently at St. Francis in Brooklyn. And the ties to the Flying Dutchmen don’t stop there: As we learned during our chat, Griffin has a long-standing connection to the most important player on the roster.

As someone who has spent most of his life and career in the northeast, how would you describe basketball here to someone who doesn’t know about it?

It’s a mixture of power with a little finesse. If you go out into the Pac-10 and out in the Mountain West, it’s a lot of run-and-gun, fast break, finesse basketball. Whereas in the northeast, you’ve got to be able to play half-court put the ball in the post and play more rugged at times.

When did you realize coaching was something you wanted to do?

To be honest with you, I realized as a sophomore in college that eventually this is what I wanted to do. I talked to coach [Mike] Hopkins about it all the time and I studied him and watched him and tried to mimic a lot of things he’s done, because he’s very successful in the coaching business. It just was one of those things that I said ‘You know what? I think I can do that. I think I’d be great at it.’

What was it like apprenticing, as both a player and a coach, at a school like Syracuse that is so well-known nationally?

It teaches you a lot. The one good thing about being at that level is that you deal with a lot of motivated kids that want to go to the next level. I think once you get from that level, you get the mid-majors and eventually the lower major colleges—some of the guys don’t believe that they can make it there. So it helps me to understand that and pump guys up, saying ‘You know, you can make it if you put the hard work in’ and give those guys the hope and the support system that it can eventually boost them to being what they want to be in terms of a professional.

What was March and April like for you, first when Brian Nash left at St. Francis and then with the upheaval here following Tim Welsh’s arrest and resignation?

My wife was having a baby at the same time, she was eight months pregnant when all this stuff was going on. I actually accepted the job before Brian resigned. I was probably, outside of his family, one of the first guys he called to tell that to. And I was trying to tell him to stay, just because of the other two guys that were there that I cared for a lot. [He] didn’t want to see those guys out of a job and I just didn’t want to see Brian out of it. I knew he had some hard years, but he had a great recruiting class coming in and I just thought that he’d be successful with some better players.

[At Hofstra], oh wow, that was a tough time. But you know what, the one thing that I was aware of as soon as I got to campus here was the support system and the great people that we have as administrators at the university. They were always in our corner, regardless. When Tim was here, they were in our corner. And when Tim had to go, they were in our corner and they backed us 100 percent, and I felt secure about that. Jack told me ‘Hey, listen go have that baby, don’t worry about nothing, we’re going to take care of everything.’ I trusted him and I believed him and he was a man of his word. And I appreciate that.

I think we’ve got a great staff—not a good staff, a great staff. We all have our own opinions, different opinions, but I think we all come together when it’s all said and done, and obviously, it’s coach’s decision at the end of the day. But we all come to a common understanding and a common knowledge of what we want to do and how we want to do it, and we just go out there and teach. It’s a great staff. We get along off the court just as much as we get along on the court, which helps tremendously in our development as a staff.

You spoke earlier about having to convince a lot of mid-major players just how good they can be. What’s it like coaching someone like Charles Jenkins, who has proven he can play with anyone and has the confidence to go along with that talent?

I’ve got to tell you a story about Charles Jenkins. Me and Charles Jenkins go back to when Charles was probably eight years old. Charles lived three doors down from where I grew up [with] my grandmother, where I lived pretty much all my life. So I know his family, I know his whole family, I know Charles and I always followed him. An the one thing that is great about having Charles here is that if I can share anything and he can get just one thing from what I’ve experienced and what I’ve been through, then I’m happy with it. He’s a pro. He’s a pro already. I’m just here to help—whatever he needs me to be and asks me to do, I’m there for him.

Give us your first memory of Charles.

He was a little big-headed kid in a skinny body [grins]. I tell people that all the time. [He was] running around. His parents, they kept him close to them, which was great. Got a great family and they’re all great people.

Labels: Get to know: Allen Griffin