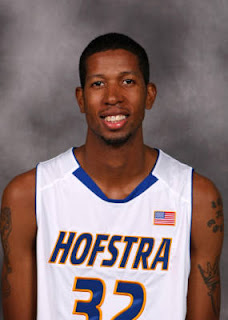 Note: The unprecedented tumult endured by the Flying Dutchmen basketball program last spring put the 2010-11 team in the unusual position of having fewer veterans than newcomers. With the start of the season fast approaching, we’ll profile the returnees, look back on their careers thus far and analyze, by speaking both to the players and coach Mo Cassara, where they can improve this season. First up: Greg Washington.

GREG WASHINGTON
Senior forward
2009-10: 6.6 pts, 6.2 rebs, 2.8 blks per game in 33 games (30 starts)
Career: 4.7 pts, 5.1 rebs, 2.6 blks per game
Notable: All-time Hofstra leader in blocked shots (203) and has broken the single-season school record in blocked shots each of the last two years (68 in 2008-09, 92 in 2009-10). Made the CAA’s All-Defensive team last year.
Three years into his career, Greg Washington’s skill set is pretty well-established: He is a game-changer on defense who is more comfortable shooting from outside on offense and is also far more effective at the end of the season than the beginning of it.
But the departure of Halil Kanacevic leaves the 6-foot-10, 215-pound Washington as the lone forward on the team with a single start on his resume and makes it imperative Washington contribute down low as well as stay on the court and play as well after Feb. 1 as before it.
As the most experienced player in the front court, it was Washington who bore the brunt of Mo Cassara’s criticism Sunday, when the Dutchmen beat Division II Molloy in an exhibition even though they were outrebounded 37-34 and outscored in the paint 22-14 in the first half. Though he played 31 minutes—a mark he reached just eight times in 33 games last year, when he fouled out six times and finished with four fouls six other times—Washington had four points, six rebounds and three blocks and didn’t go to the free throw line once.
The inability to get to the free throw line is what concerns Cassara the most. Washington didn’t take more than four free throws in a single game last season and has taken four or fewer free throws in each of his last 47 games dating back to Jan. 5, 2009 against Northeastern.
If the Dutchmen are to finish among the top four in the CAA and earn that valuable first-round tournament bye, Washington will also have to find a way to play like it’s February all year long. Washington averaged 7.8 points, 7.3 rebounds and 3.2 blocks in 10 games after Feb. 1 last season, marks that were all noticeably better than his seasonal averages. He had at least 10 rebounds in four of his eight February games after grabbing 10 rebounds just once in his first 23 contests. Included in those 23 games were stretches of 12 games and 10 games in which he didn’t record double-digit boards.
Washington had at least 10 points in five of his last 12 games (a span beginning with the Dutchmen’s 93-54 rout of UNC Wilmington Jan. 27, when Washington had 14 points, 10 blocks and fell two rebounds shy of the first triple-double in school history). He had at least 10 points just three times in his first 19 games and went 15 straight games in single digits before collecting 14 points against UNC Wilmington.
He had similar splits as a sophomore in 2008-09, when he averaged 6.3 points, 6.0 rebounds and 1.8 blocks in nine games after Feb. 1 and 5.6 points, 5.6 rebounds and 2.3 blocks overall. He had back-to-back double-doubles against Fordham and Stony Brook Dec. 3-6 but didn’t record another one until a 12 point/14 rebound effort against Wilmington in the first round of the CAA Tournament.
It would be unfair to expect regular double doubles out of Washington. But if he can approach double digits in one category per game and avoid the kind of slump he had in January last year—when he went eight straight games without recording either eight points or eight rebounds in a game—as well as get to the line with some regularity and provide his usual shot-blocking on defense, then he’ll be more indispensible than complementary and will provide a huge boost to the Dutchmen’s fortunes.
WHAT WASHINGTON SAYS: “[He wants to] show a little bit more of a killer instinct, because a lot of teams are going to key on Charles. Charles is the best player. The next you know, a big will come in and have a triple-double game, which will keep teams on their heels and be like ‘Oh man, we’ve gotta guard one through five.’ I want to go into each tame with a team [thinking] ‘Oh man, we’ve gotta guard everybody from Charles to the walk-on.’ I want to make sure that each player on our team is just as dangerous as the best player.”
WHAT CASSARA SAYS: “I think the big challenge for him is continue to improve offensively. I think the big thing for him is minutes played, making sure he’s on the court more. And defensively, being a little smarter—don’t want to take his aggression away, but having him on the court more.”
Email Jerry at defiantlydutch@yahoo.com or follow Defiantly Dutch at http://twitter.com/defiantlydutch.
Posted by Jerry Beach at 8:14 AM