Bits and Bytes: Saturday mornings are for cartoons—and Defiantly Dutch! 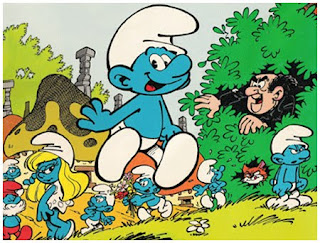 Procrastinating Smurf is not pictured. He'll be there later. (Hmm, that sinister-seeming balding black-haired guy in the bushes looks like someone who might coach in the CAA, though...)

Hey, it’s Saturday morning and I’m posting again. This is turning into a habit, one that I’m going to try and break next week by getting back into the regular season posting routine. (If you like how that sounds, good, you’ll probably hear it again a week from now!)

The dual day gigs are great—money is nice!—but striking a balance and doing everything in a cohesive manner remains a challenge. Apparently I am as good at time management now as I was in ninth grade, when my dear beloved late Mom sent me to a study skills seminar in hopes of saving my soul. Seriously. How bad off do you have to be to be sent to a study skill seminar in ninth grade? If only we knew that ADD existed back then I could have been doped up on all sorts of good stuff.

Where was I? Oh yeah. Short attention span. Hey look my cat is stretching!

Anyway, the basketball regular season is fast approaching and we’ve got a lot of preview material ready to roll, so stop back Monday for the beginning of the good stuff. No, really, Monday!

Before that, it’s a busy weekend at Hofstra as fall and winter sports collide. The men’s soccer team tries to clinch a CAA Tournament berth tonight when it visits James Madison. It’s simple for the Flying Dutchmen: Win and they’re in. A loss and they need to overcome some lottery-type odds to reach the four-team tournament.

The women’s soccer team, of course, is facing JMU for the CAA title Sunday. We’ll be at the men’s basketball scrimmage against Molloy, so if you’re looking for women’s soccer coverage, I recommend you check out the Hofstra Chronicle, which will have a story up shortly after the game. Back in my day I would cover the game on Sunday and waste the next 72 hours before writing the story in a frenzy and bitching about how rushed I was. And I liked it!

Where was I again? Oh right. You can also follow the Chronicle sports department on Twitter at @HUChronSports.

As for the men’s hoops scrimmage, stop back here during the game and watch me experiment with a feature that may or may not become a staple come the regular season. Intrigued? You should be!

See you then. In the meantime, a couple quick links for your weekend perusal.

—I’ll definitely offer my take on this next week, but your good friend and mine Mike Litos evaluated Hofstra’s CAA tenure as it prepares for its 10th season in the league. Very good stuff, as are Litos’ pieces on the rest of the America East four—Delaware, Drexel and Towson.

—ESPN.com’s Andy Katz slummed long enough with the mid-majors to write about Charles Jenkins earlier this week. See if you can find Katz’ erroneous “scoop!”

—Props to the Chronicle for being the first to report that guard Malik Nichols of Boys & Girls High School has decided to attend Hofstra. Adam Zagoria also reported Wednesday that Hofstra has also received a verbal from 6-11 center Tyrone Lyons of L.A. Trade Tech.

—Lastly, as if the 1-4 p.m. window Sunday wasn’t packed enough already, the Tampa Bay Buccaneers—known worldwide as The Official NFL Team of Defiantly Dutch—are battling the Atlanta Falcons for first place in the NFC South. Hmm. Can we get that game aired on the scoreboard during the hoops scrimmage?

Cmon, you want to say Gargamel is Jim Larranaga. Just give in and say it. :-)