In which I miss the Blue/White Scrimmage, but post a Just One Of The Guys photo anyway 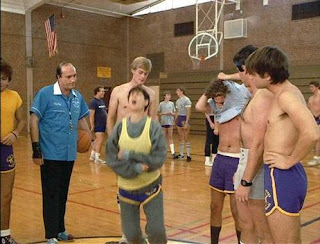 Missing the Shirts/Skins, err, Blue/White Scrimmage isn't going to stop me from the annual posting of this still from the best movie ever made, Just One Of The Guys!
A quick and rare Saturday post to apologize for the lack of posts this week as well as for my absence at today’s Fanfest/Blue-White Scrimmage. A crazy few days at the day job coupled with a wicked cold (as the Boston Bias fans say) knocked me for a loop. I’ll be back Monday with the long-awaited debut of the Running Tally of preseason predictions.
I’ll be out of state this afternoon (if you’re in northwestern Connecticut, come to my book signing!) and will miss the festivities at the Arena. I hate to miss it, but on the bright side, I found a way to use the annual Just One Of The Guys photo! Fortunately, those of you looking for updates and posts on the Blue/White Scrimmage will be in good hands with Gary Moore, my bitter blogging rival. Check him out at Twitter at @gmoore21566. And don't forget Mo Cassara at @Coach_Cassara.
Lastly, here are a couple interesting links. If you’re fortunate enough to be a Cablevision subscriber (snort, hey, does anyone know who is winning the National League Championship Series?) Newsday’s Steve Marcus wrote about the upbeat prospects for the men’s and women’s basketball teams here (and he didn’t even declare how Hofstra made a horrendous mistake joining the CAA!).

And our old friend Tom Pecora chatted it up at the Atlantic 10 media day at Chelsea Piers (a media day in which he doesn’t have to get on a plane—he’s already a happier man!) Thursday. In addition to promising a unique preseason bonfire for Fordham, he also picked at the festering wound that is the 2006 snub. And you wonder why we got along so well. Have a good weekend, catch you Monday!