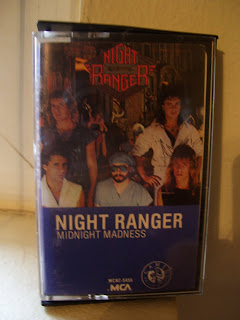 The real Midnight Madness! File photo from author's cassette collection, 1984. Make fun of me at your peril.

The first day of college basketball practice elicits from us great gratitude and anticipation every year. The off-season, which seems so unspeakably long when the final second of the previous Flying Dutchmen season ticked off the clock, is finally over, and there will never be more basketball to be played than there is right now.

There’s no room for pessimism on New Year’s Day, when every question mark is an exclamation point and every scenario is the best-case one. Especially today, when we welcome the fresh start October 15 symbolizes while also acknowledging how last April and May were reminders that progress does not come without pain.

Even before Tim Welsh made a career-ruining mistake in the early morning hours of Apr. 30, this coaching change was wholly different than the last time Hofstra went outside the school to find a new leader of the men’s basketball program. Back in 1994, there were no worries about star players transferring and no bruised feelings generated—internally or externally—by the exit of the outgoing head coach. Such was life on the fringes of Division I.

Life as a Flying Dutchmen fan is much better in 2010 than it was in 1994. But some of the innocence is gone, too, and was gone long before the Welsh incident. Yet today is about regaining some of that wide-eyed wonderment and believing in all the positives the season has to offer.

Sure, if all of the underclassmen who ended last season with the Dutchmen were taking the court today, Hofstra might be the preseason favorite to win the CAA. But this is a wide-open conference that has no obviously dominant team. The Dutchmen have the best player in the league and seem to have developed a great chemistry with new coach Mo Cassara. To borrow the three words used by just about everybody in every sport before the first practice of every season: Why not us?

Charles Jenkins’ final lap around the track isn’t what he or anybody else imagined, but he’s still got the opportunity at leading the Dutchmen to the NCAA Tournament berth that would cement his status as the best player to come through Hofstra in at least the last 30 years. Fellow seniors Greg Washington and Nathaniel Lester get their last shot, too, while Brad Kelleher gets his first shot, even if it’s far shorter than it should be. We are so optimistic today, we are almost in the mood to thank the NCAA for granting Kelleher 22 regular season games. Almost.

We look forward, as well, to seeing the future of the Flying Dutchmen in the sophomores who stuck around (David Imes, Yves Jules and Matt Grogan), last year’s redshirts (Mike Moore and Paul Bilbo) and the intriguing newcomers (transfers Dwan McMillon and Stevie Mejia, the latter of whom is redshirting, and freshmen Shemlye McLendon, Stephen Nwaukoni and Roland Brown) brought aboard by Cassara.

And we are glad the season will start with no fanfare. Just roll out the cart of basketballs and begin playing. As fun as a Midnight Madness would be, better to wait until next year, when Cassara and his staff has more time to put one together. Plus, imagine how cool it’ll be to raise the CAA banner a year from tonight. Hey, it’s October 15. Why not us?