Bits and Bytes: What I Did On My Summer Vacation 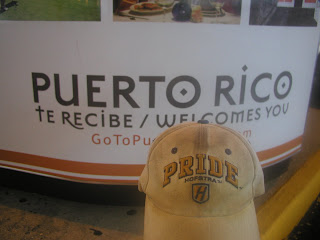 Hofstra Hat--think Bally Basketball except less cultured and with a ravenous appetite for cheesy '80s music--couldn't wait for November to go to San Juan!
You know you’ve got a fever and the only cure is more CAA when you hit San Juan as part of a cruise and think not about seeing the sights or sampling the local food but of taking a picture of a sweat- and dirt-stained, can’t-be-washed-because-everytime-it-gets-wet-it-stinks-for-a-day-and-plus-it’s-my-good-luck-hat-even-though-we-haven’t-won-a-damn-thing-since-I-bought-it Hofstra hat in front of a San Juan sign so that I could signify the Flying Dutchmen’s readiness to knock off North Carolina in the Puerto Rico Tip-Off Classic Nov. 18 (which is 79 days from now, but who’s counting?).

(Note to self: Next time, just write “It was a dark and stormy night” and get to the point)

Anyway, the original plan was to get to the Coliseo de Puerto Rico—look at me with the Spanish, who could ever guess I failed it twice in high school?—and take a picture of the hat at the actual site of the Tip-Off games. But we arrived in San Juan at the same time as torrential downpours (see below) and I couldn’t shake the image of my wife and I getting lost or getting stuck in traffic and arriving back at the dock just as the ship sets sail for the Virgin Islands. So a hat in front of a welcome sign it is. 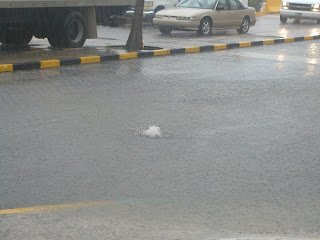 This flood is nothing compared to what will happen when UNC fans pile on to the streets of San Juan and weep following the Flying Dutchmen's win on Nov. 18!

The truly sickening thing is San Juan wasn’t even the only time my wife and I discussed CAA hoops (as well as CAA Hoops) while we were in the middle of the Atlantic. More on the burst of “inspiration” I had on the boat later this week. In the meantime, let’s return from summer vacation with these bits and bytes:

—The world’s worst-kept secret was confirmed Aug. 4 with the announcement that the Dutchmen will beat—err, play—North Carolina. As a reformed Tar Heels fan—somewhere in my Dad’s house I still have enough UNC T-shirts, hats and shorts to clothe an army—this is particularly exciting stuff. I was such a diehard Heels fan that my roommate asked me early in our Hofstra tenure who I’d root for if Hofstra ever played UNC. I of course answered Hofstra, but never imagined I’d ever get the chance to actually root for my alma mater against the Tar Heels. Yet here we are, my second “worlds colliding” moment in as many years. Can’t wait. Roy, you tried ducking us by leaving Kansas, but you can’t avoid us anymore!

—The non-conference schedule is beginning to take shape and it certainly looks like a travel-friendly one for fans. In addition to the three games in Puerto Rico Nov. 18-21, here are other games that have been confirmed, per opponent's websites:

The Farmingdale site lists the game against Hofstra as an exhibition, which seems odd after the Dutchmen’s games against Farmingdale and Old Westbury the last two years counted in the standings.

There is also a Bracket Buster return game at Rider still to be scheduled as well as a road Bracket Buster contest in February. That’s 10 non-conference games. The Dutchmen played 13 last year, so my guess is Hofstra will either participate in another local tournament or schedule two more games with nearby foes.

—Whether or not Nathaniel Lester plays during the non-conference schedule—or at all—remains to be seen. No, he’s not transferring or signing a contract to play professionally in the Falkland Islands, but the thigh injury he suffered while working out in July has put his availability for 2010-11 into question. Our main man Mo Cassara said during his video chat at GoHofstra.com last week that Lester is headed for another MRI in the next two weeks which will determine how much time he’ll miss.

Lester is the returning player I was most curious to see in the post-Tom Pecora era and the Dutchmen could certainly use his versatility and experience. On the other hand, as I noted in May, of the five non-seniors inherited by Cassara, two didn’t play last year and the other three combined to average 6.5 minutes, 1.3 points and 0.7 rebounds per game. So no matter how well this year’s freshmen do, I could see the 2011-12 team really benefiting if Lester were to redshirt this year. My guess is we’ll know Lester’s fate before the season starts.

—A little late here, but I got a nice surprise in the mail in mid-July when I opened an envelope from Hofstra to find my article about Cassara and seniors Lester, Charles Jenkins and Greg Washington included among a packet of off-season clips about the Dutchmen. I have to admit, I didn’t expect to see the day when a Defiantly Dutch story was included in an official Hofstra mailing, but it was very cool and I appreciate the gesture by the athletic department. I also appreciate all those who retweeted the article and forwarded it to others via email July 1, which was one of the biggest traffic days in DD history.

—Also thanks to our friends at the CAA Zone, who underwent a snazzy redesign this summer and provided a link to Defiantly Dutch under the headline “CAA-Related Sites You Should Visit.” Much appreciated. Check out the new site, which features a blog devoted to breaking CAA news.

—Lastly, apologies for the longer-than-anticipated sabbatical, but I took advantage of the summer to enjoy gainful employment for a change and recharge the blogging batteries. This just in: A lot of stuff happened last year, so it was good to catch our breath. But school starts a week from tomorrow and the fall sports season officially begins Friday, when the volleyball team hosts the Hofstra Invitational, so we’re back and ready to begin another year of fun and hi-jinks here at Defiantly Dutch. I’ve got a lot planned—for men’s hoops as well as the other sports, including one that’s no longer played at Hofstra—so won’t you please stay tuned and stick around?