Out of a chaotic time comes a lasting bind for Cassara, Jenkins, Washington and Lester 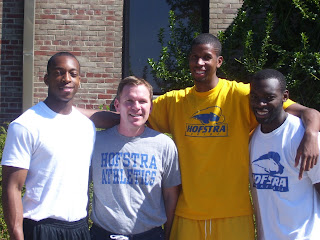 Nathaniel Lester, Mo Cassara, Greg Washington and Charles Jenkins pose in front of Margiotta Hall Wednesday morning.
Mo Cassara’s living arrangements during his first few weeks as the head coach of the Flying Dutchmen sound like the pitch for a sitcom: Hip thirtysomething basketball coach is thrust, quite literally overnight, into the chance of a lifetime has no place to live and must stay in the dorms with his players.
Alas, even though Cassara spent weeks living on the second floor of Bill of Rights Hall—better known at Hofstra as “Tower B”—he did not hang out in the 13th floor lounge with Charles Jenkins, Nathaniel Lester and Greg Washington, the trio of best friends who are living on the fifth floor of the dormitory this summer. There was no shooting the breeze while the quartet fed quarters into the laundry machines on that 13th floor, no watching movies in the lounge, no swapping of CDs, no pooling crumpled up dollar bills to order a late night snack from Campus Pizza.
In fact, as much as Cassara enjoys spending time with all of the Dutchmen at the men’s basketball offices, he also realized it was best to keep a professional distance at “home.” So he tried—in vain—to keep his room number a secret by leaving the dorm at sunrise and returning long after dark.
Of course, anyone who has ever lived in one of the towers at Hofstra knows how the word “tower” is a misnomer and how fast word travels in the tight quarters. “They knew the security guard at the dorm,” Cassara said. “So they found out where I was living.”
“He tried to hide it from us, but we still found out,” Lester said. “He couldn’t hide it from us.”
But Cassara didn’t have to experience dorm life with the Dutchmen’s three veteran players in order for a unique and important bonding experience to occur between the new coach who needed to establish a mutual trust with seniors who were reeling from two coaching changes—the second far more unexpected than the first—and needed, more than anything, a friend.

Sporting a Hofstra athletics T-shirt and gym shorts as he arrives at Margiotta Hall for a group interview Wednesday morning, Cassara looks young enough to step on the court with Jenkins, Lester and Washington. He greets each player with a hearty handshake or a hug—decidedly old-fashioned exchanges for a group that got to know each other by swapping messages via Twitter and their Blackberrys.

“Nat took care of setting me up with BBM,” Cassara said. “That’s kind of how we communicate now.”

Cassara has Tweeted his affinity for late ‘80s dance pop, but he also immediately impressed the Dutchmen with his knowledge of modern-day R&B and hip hop. “When I arrived here as an assistant, we spent a lot of time talking about that stuff,” Cassara said.

The natural interaction, both online and in person, between the foursome makes it easy to envision Cassara hanging out with players nearly 15 years his junior and to imagine them as peers. And they were peers, for a few unprecedented days in late April and early May—the assistant coach who might be out of work for a second time in two months and three players who were staring at the possibility of a second coaching change in two months.

While Tim Welsh was in limbo following his arrest for drunken driving, Cassara—who lost his job when Boston College fired Al Skinner’s entire staff in March—kept in constant touch with all the Dutchmen, but in particular Jenkins, Lester and Washington.

While so many of the coaches and players around them were either leaving Hofstra or thinking about it, the rising seniors were basically stuck in Hempstead. Neither Jenkins nor Washington, both of whom redshirted as true freshmen in 2006-07, could transfer to another Division I school. Lester could, but would be 23 years old by the time he suited up in the 2011-12 season.

Their storybook senior season was not supposed to turn out like this. Jenkins was the reigning player of the year in a conference that featured a first-round NBA draft pick. Washington was finally developing into the dual threat he was projected to be back when he was a highly touted recruit. And while Lester lost his starting job midway through last year, he was still a versatile player and a nightly threat to put up a double-double.

But now Tom Pecora was gone, followed shortly thereafter by Halil Kanacevic, one of two Dutchmen to make the CAA’s all-rookie team. Welsh’s arrest moved Chaz Williams, the other member of the all-rookie squad, to announce his plans to transfer.

Jenkins, Lester and Washington were not the only players bound to Hofstra: Transfers Mike Moore and Brad Kelleher, both of whom sat out last season, couldn’t go to another Division I school, either. But nobody had invested as much in the program as Jenkins, Lester and Washington, and what was shaping up as an unforgettable end to their careers—the year Hofstra finally contended for the CAA crown—was now a nightmarish mess.

“It was a tough time,” Jenkins said. “Everything that happened—it’s one thing to read about it. It’s another thing to actually experience it.”

At the peak of the chaos, they briefly pondered the unthinkable: Following everyone else out the door.

“It ran across my mind,” Jenkins said. “But graduating is more important to my family than basketball.”

Then, with a laugh, he added: “Plus, me and Greg, we redshirted, so there’s nowhere we can go.”

“It crossed our mind—at a glance,” Washington said. “We looked at it in a distance.”

“It crossed my mind too,” Lester said. “When we didn’t have a coach, it was definitely on my mind: What’s my next move going to be, because I’ve only got one year left. I wanted to make sure that this last year was good.”

Cassara, linked to Jenkins, Lester and Washington by a common uncertainty, talked to the players during the five days in which Hofstra had no staff (then-assistants Cassara, Steve DeMeo and Allen Griffin hadn’t officially signed their contracts), asking them to remain patient and assuring that everything would somehow work out.

“We spoke to the coaching staff that we had and they let us know the door was always open in case you want to talk,” Jenkins said. “I think us knowing they were always going to be there no matter what happened whether they [were] going to keep [their] job or not, I think [they] just gained more respect.”

“Communication was important during that time,” Lester said, “He always kept in touch. Even though his job was on the line, he was still acting like he wasn’t going anywhere. That showed us a lot—that he cared about us, not just the job. He was in this for the players.”

Cassara went to bed May 4, the day after Welsh resigned, unsure how much longer he’d be sleeping in a dorm room. But a meeting with Jack Hayes and Stuart Rabinowitz earlier that day turned Cassara into the leading candidate for the job, and he signed a multi-year deal the afternoon of May 5.

Cassara now lives in Point Lookout, but he’s keeping the same long hours at the office. Next year’s team is on campus for Summer Session II classes, and while Cassara and his staff will spend July recruiting, he’s confident leaving the program in the hands of Jenkins, Lester and Washington, with whom he developed an indelible trust during an unprecedented time.

“It was a tough time for everyone, it was tough all over the place,” Cassara said. “But these guys have been great on so many different levels, so supportive and so welcoming. And that obviously made putting the time in very easy.”

Cassara and the seniors alike know the relationship will continue to evolve, especially once practice starts Oct. 15 and the topic of conversation is no longer music and the tone becomes more urgent. But Cassara is confident the foundation that has been built is more than sturdy enough to handle whatever changes lie ahead.

“I think in any relationship, you take some time to build trust and to build common interests and things like that,” Cassara said. “And ultimately, these guys want to win and they want to be successful. Once we build those lines of trust and those lines of communication, they’ll know that I’m going to do everything I can to help us be successful. Some days that’s going to be easy. Some days that’s going to be tough. And ultimately, these three guys—they’re veteran guys and they have been through the battles a little bit.”

Can't wait to meet Mo and watch the team get on the court in October!