In which I finally comment on the OOC being Ben Seavered 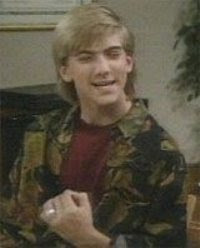 If you’re like me (once again, I’m very sorry), then Growing Pains was a staple of your weekly television viewing in the mid-to-late ‘80s. And if you’re like me, you no doubt remember the overnight transformation of little brother Ben Seaver, who went from pipsqueak little runt to Barry White during a Very Special Two-Part Episode in 1989.

Ben’s emergence into manhood occurred, quite literally, in the middle of the season finale/cliffhanger and overshadowed the drama of Mike asking the family nanny to marry him. Alas, Mike decided he couldn’t marry her because Julie posed for Playboy and would thus go to hell, or be Left Behind to guest star as a heathen car thief on Beverly Hills 90210. I can’t remember.

(Things that I never would have guessed: This season finale aired immediately after The Very, VERY Special Episode in which Carol’s boyfriend, Sandy, dies after he gets into an accident while driving drunk. Mike telling Carol that Sandy died while Carol and her parents were on their way back from the hospital—where Sandy appeared to be recovering—and Carol’s subsequent hysterical “what about his second chance?” reaction remains one of the biggest “holy crap” moments in TV history. And much like Julie, Sandy’s portrayer went on to guest star on 90210 too!)

Where in the hell was I? Oh yeah.

Anyway, I was reminded of Ben Seaver when looking at the Flying Dutchmen’s 2009-10 OOC. Geez. Talk about rapid maturations. Last year’s OOC was so spindly and pimply-faced, it wasn’t even released until mid-September. This year’s OOC is so grown up that Hofstra couldn’t even wait until July to release the OOC, and really, who can blame folks there for puffing their chest out a little bit over this?

Actually, a better pop culture analogy might be this: Last year’s OOC is to this year’s OOC what Scott Scanlon was to David Silver—hopefully sans Scott’s self-inflicted gun wound—in season two of 90210. They’ve got some history together, but other than that, the two have irreparably grown apart.

Hofstra has gone from playing a New York version of the Big Five to playing the Real Top Five, all in one off-season. After visiting Kansas to open the season Nov. 13 (not that I’m looking forward to it or anything, but it’s only 130 days away), the Dutchmen head to the pre-season NIT in Storrs, CT a mere three days later, where, according to this post on the CAAZone, they’re expected to face either Yale or Colgate with the winner to face UConn the next night. My apologies for jumping the gun last week and declaring Hofstra was actually scheduled to play UConn.

As many as four games in the pre-season NIT is a pretty good upgrade on the three games in the Charleston Classic, which last year featured exactly zero ranked teams. And it’s not the only tournament for the Dutchmen: They’ll be part of the Holiday Festival at MSG Dec. 20-21 and will open play against St. John’s, which apparently thinks it has a chance to beat Hofstra after ducking the Dutchmen the last two seasons, before facing Cornell or mid-major golden boys Davidson in the final. That’s right. I’m calling a win over St. John’s RIGHT FREAKING NOW.

The last time Hofstra played in two pre-season tournaments was 2006-07, when the Dutchmen were still riding high off the publicity generated by The Great Screw Job and were the overwhelming favorite to win the CAA.

There’s only three ’08-09 opponents on this year’s schedule: Manhattan, New Hampshire and Fairfield all visit Hofstra after hosting the Dutchmen last year. Iona and Fordham are off the schedule after two straight years while long-standing relationships with St. Francis (four straight years) and Stony Brook (nine straight years) have been interrupted, if not outright severed.

Even given the bad feelings engendered by The Lacrosse Incident, the lack of a game with Stony Brook surprises me, and is the most telling sign yet that the Cold War between the two schools is quite serious and not headed for an amicable resolution any time soon. This is going to get really compelling as the conference arms race heats up over the next few years.

The three metro-area OOC opponents are the fewest since 2006-07, and even then, the Dutchmen played Syracuse and Siena, both of whom have pretty sizable metro-area ties. Tom Pecora likes to engender camaraderie by playing fellow local mid-majors, so it’ll be interesting to see how Hofstra manages to straddle two worlds if this year’s OOC is indeed a sign that it is trying to position itself for a move to the A-10 or some unnamed, yet-to-be-founded offshoot of a fractured Big East.

From a purely personal point of view, as a Connecticut native, Hofstra heading up to UConn and playing at Gampel Pavilion—even if the Dutchmen don’t play the Huskies—is the greatest worlds colliding moment I’ve had in the last 16 years…an anti-Elaine and Susan moment, if you will. As loyal reader Matt, my best buddy since the mid-80s and a UConn fan since birth, asked last week: “Do you ask me for tickets or do I ask you for tickets?”

And from a basketball point of view, let’s hope this OOC quells the silly talk from last year that the creampuff OOC meant Pecora was ducking the big boys. He and the powers that be recognized the Dutchmen weren’t the type of team that could handle or withstand a rigorous November and December, so they decided to try and fatten up on some beatable opposition in hopes of building some confidence for the CAA season.

Given the Dutchmen won 21 games despite outscoring the opposition by a grand total of two points, I’d say Pecora and the rest of the staff knew what they were doing. Along those lines, this OOC indicates Pecora thinks pretty highly of the ’09-10 Dutchmen. There’s clearly a lot of confidence invested in the returning trio of Charles Jenkins, Nathaniel Lester and Greg Washington, as well as the likelihood that freshman Chaz Williams will be running the point.

It probably won’t always be pretty in November and December—and with the Dutchmen scheduled to play just two games in 13 days following the pre-season NIT final Nov. 26 and just two games in the first 19 days of December, Pecora will have plenty of practice time following the opening blitz of games—but this is one season in which it’ll be easy to subscribe to the notion of early (growing) pain(s) for late gain. Maybe come New Year’s Day, we’ll be singing along: “We’re nowhere near the end, the best is ready to begin…”

Email Jerry at defiantlydutch@yahoo.com. And join the Defiantly Dutch group at Facebook today!
Posted by Jerry Beach at 6:30 AM