Of Steve McNair, the Flying Dutchmen football team and the long-lost innocence of the fall of '94 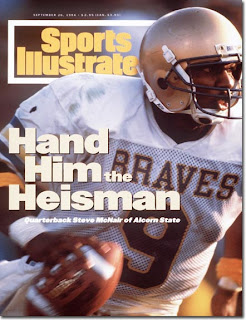 A different time, long ago.

Among the very last possibilities on the list of things I expected to say to my wife on July 4th was “Honey, I think I just heard that Steve McNair died.” But there we were, enjoying a cookout at my aunt’s house when my ears caught a radio report that referred to McNair in the past tense, and I knew a weird month of celebrity deaths had just gotten a little weirder.

Unfortunately for those McNair and his girlfriend Sahel Kazemi left behind, things got a lot weirder in the subsequent days. But before the tawdry details of the murder-suicide became national news, I thought of the fall of 1994, when the fortunes of McNair—the star quarterback at Alcorn State—and the Hofstra football team were intertwined despite the campuses being separated by 1,300 miles.

Just about everyone believes their collegiate days were a simpler and better time, but in this case, 1994 really was, in just about every way, a more pure and innocent time, on and off the field.

Back then, an underdog had an opportunity—a small one, but an honest one nonetheless—to, in the words of Joe Gardi, run with the big dogs. A school from the SWAC, which has never won a I-AA playoff game, and an independent in just its fourth season at I-AA were not supposed to crash a tournament typically reserved for the established and the elite.

The 16 schools that qualified for the playoffs in 1994 combined for 49 playoff appearances between 1990 and 1994 alone—well more than half of the total bids awarded in that time. Only one team in the field (North Texas) had not already reached the playoffs in the ‘90s. Almost half the I-AA national championships (15 of 31) have been won by schools in the ’94 tourney, an especially impressive figure given that six of the 16 participants in ’94 have since moved to Division I-A.

There was no room at the cool kids table for an Alcorn State or a Hofstra. But McNair, via the strength of his record-setting right arm and two legs, and the Flying Dutchmen, via sheer will and determination and the coaxing of a coach who saw lots of himself in the players who were overlooked and underappreciated by the powerhouse programs, forced their way into the I-AA consciousness.

They did so methodically, in the days when the Internet was in its infancy, ESPN consisted of two networks and Sports Illustrated could still shape sports conversation in America. It was still possible for SI to put an unknown player on the cover of the magazine that landed in mailboxes Thursday and turn him into a household name (and Heisman Trophy candidate) by Friday.

It was still possible for a cover subject like McNair to continue building a following over several weeks and months, to have his feats chronicled by word of mouth and wire reports in the newspaper and his legend grow via a modern game of telephone. By the time news of his accomplishments reached the coasts, it was hard to differentiate between fact and fiction.

Of course, McNair did more than anyone else to blur the line: He threw 47 touchdowns in 1994 on his way to a third-place finish in the Heisman voting and remains the all-time I-AA leader in career passing yards (14,496 yards) and total offense (16,823).

Hofstra didn’t get nearly the publicity McNair received, but its emergence from obscurity was no less compelling. With their unimposing schedule and lack of national profile, perfection wasn’t enough if the Flying Dutchmen wanted to make the playoffs. They had to score style points, too, as they learned when the 24-7 upset of previously unbeaten (and playoff-bound) New Hampshire Oct. 1 merely lifted the Dutchmen to the top of the “others receiving votes” category in the I-AA top 25 poll.

So six days later, the Dutchmen destroyed Central Connecticut, 62-7, and it wasn’t nearly as close as the final score indicated. Afterward, Gardi was asked why the Dutchmen—who pulled their first stringers after three quarters—poured it on.

“We needed to earn respect and get into the top echelon,” Gardi said. “If that meant scoring a lot of points, that’s what we had to do. I got word from a lot of people [who] count around here that we should do it.”

Hofstra’s pursuit of perfection ended on the Friday before Halloween against Towson State, but the Dutchmen finished 8-1-1 and harbored enough hope for a bid to the tournament to invite fans and supporters to Margiotta Hall for the I-AA selection show the Sunday before Thanksgiving. I remember the audible groan going up from the crowd when it was revealed Alcorn State would visit no. 1 Youngstown State in the first round.

I didn’t write a story about it for The Chronicle because we didn’t publish Thanksgiving week, but I remember Gardi saying he knew Hofstra wasn’t going anywhere once Alcorn State appeared in the bracket. And truthfully, nobody at Hofstra had a problem with it.

Sure, Hofstra deserved a bid and it would have been awesome to make the tournament as a non-scholarship independent, but Alcorn State also had a really good case for a bid and its national notoriety—the Braves had a handful of games televised on ESPN2—was impossible to ignore for a tournament that needed all the attention it could get. This wasn’t a George Mason-level screw job, just a matter of Hofstra having the 17th-best candidacy in I-AA.

The selection show marked the last time the football fates of Alcorn State (which lost to Youngstown State 63-20) and Hofstra would converge. The arms race that began in 1991—when the NCAA ordered all Division I schools that played Division III football to upgrade their gridiron programs to D-I—made it impossible for anyone else to follow the Alcorn State/Hofstra blueprint into national relevancy.

The SWAC decided following the 1997 season it made more sense, financially and otherwise, to excuse itself from consideration for the I-AA playoffs and limit its postseason play to a championship game between the conference’s top two teams. Even if the SWAC wanted to remain eligible for the tournament, the success enjoyed by McNair would have made it just about impossible to compete for the title.

One thing that was not better in 1994 was the perception of the black quarterback. It’s funny, and not in the ha ha sort of way, to read some of the things national commentators said about McNair in 1994, as if he chose to go to Alcorn State and toy with the opposition instead of playing quarterback at a I-A powerhouse.

McNair’s brilliance at Alcorn State, and his subsequent impressive career in the NFL, helped a lot of football people find religion. The big-time schools and the NFL alike became interested in finding the next McNair, and nearly a decade-and-a-half later, he remains the last quarterback selected in the first round of the draft out of a historically black university.

Schools that offered non-scholarship football in the mid-‘90s have largely either upgraded the program—as Hofstra began to do in 1995, when it made the first of its four playoff berths—or pulled the plug on it, a la Iona and most other MAAC schools. The number of schools still playing non-scholarship football has declined to the point where most of them now reside in a single league and harbor little hope of reaching the tournament.

Hofstra is now in the most elite I-AA conference in the land, but with ex-football players no longer holding positions of power within the university, it feels as if the Dutchmen have a better chance of joining a non-scholarship league—or worse—than of remaining in the CAA for the long term.

The newspapers and magazines that introduced most of America to the likes of McNair and the Flying Dutchmen are obsolete today. Instant media has hastened the timetable of the phenom or out-of-nowhere success story.

Sports Illustrated is dated by the time it is printed and dwarfed on the sporting landscape by ESPN and its various tentacles—one of which, ESPN The Magazine, produces an annual “Next” issue in which it identifies several “Next Big Thing” candidates. When SI put 16-year-old baseball phenom Bryce Harper on the cover of its June 8 issue, it didn’t feel newsworthy, it felt manufactured—as much by the Harpers as SI—and desperate, a tacit admission that a story such as McNair's can no longer develop organically.

It’s unintentionally ironic that the cover story in the July 13 SI—the first issue produced since McNair’s death—is the annual “Where are they now?” issue. The magazine’s story on McNair clocks in at just 726 words, a measure less of the impact of the story than of how ESPN had already tackled the story from multiple angles by the time SI could chronicle it.

To read such stories is more jarring now than it was then, as well. To be 20 or 21 and hear of a recently retired athlete dying in his mid-30s is to be saddened by the death but also distanced from it, to remember him only from flickering television images or yellowed newspaper clips.

But to be 35 and hear of the death of an athlete born in 1973 is to remember what it was like—as an observer, and, in the grandest sense, a peer—to watch the arc of his career unfold, and to recall the days when athletes who died young still seemed so much older than us.

Email Jerry at defiantlydutch@yahoo.com. And join the Defiantly Dutch group at Facebook today!
Posted by Jerry Beach at 10:35 AM