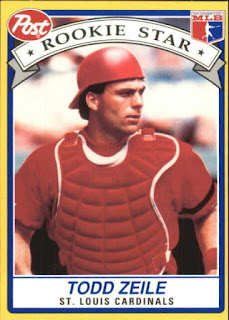 Sure. it'd be easy to post a UCLA basketball player here, but when you can post a baseball card picturing UCLA grad Todd Zeile as a catcher, you do it.

The lose-one, win-one pattern (thankfully) continued last Friday for the Flying Dutchmen, who never trailed in cruising past Division II New York Tech, 111-69. Nice. The Dutchmen will take a big step up in competition tonight, when they visit UCLA to start a three-game California swing and a six-game road trip overall. Here’s a look back at the win over the Bears and a look ahead to the big, bad Bruins.

THE MOST RECENT GAME SUMMARIZED IN ONE PARAGRAPH
The Dutchmen mounted 12-0 and 15-0 runs in the first half and never looked back on their way to beat4ing New York Tech. Tareq Coburn had a career-high 23 points and added five rebounds. Isaac Kante (19 points, 10 rebounds) had his first career double-double while Jalen Ray tied a career high with 19 points. Kevin Schutte and Omar Silverio (12 points apiece) each scored in double digits for the first time. Eli Pemberton had eight points, eight rebounds and five assists while Desure Buie racked up a career-high 11 assists. And Connor Klementowicz sent everyone home happy by scoring the final two points!

THIS IS THE 25TH ANNIVERSARY OF FRIENDS’ FIRST SEASON, WHAT WOULD THIS GAME BE TITLED IF IT WAS AN EPISODE OF FRIENDS?
The One Where 111 Wasn’t A Route Number

WAS THIS A UNICORN SCORE?
Yes! Of course, that’s no surprise considering the 111 points are the third-most in program history. This is the Dutchmen’s second unicorn score of the season, keeping afloat the hope of a unicorn season! They recorded 10 unicorn scores last season. The term unicorn score was coined by Mets superfan, historian and blogger Greg Prince to describe a score by which the Mets had never previously won.

WIRE-TO-WIRE WIN
The win over New York Tech marked the first this season in which the Dutchmen never trailed and their first wire-to-wire win since a 76-67 win over James Madison in the CAA quarterfinals on Mar. 10. The Dutchmen enjoyed five wire-to-wire wins last season.

THE FLYING DUTCHMEN AFTER FOUR GAMES
As you may have gathered by now, the Dutchmen are 2-2 after four games. This ties the 2019-20 team for the 34th-best record through two games. Twenty-nine other teams began 2-2, most recently the 2018-19 team. Here is how some other notable Hofstra teams have fared through two games.

This feature is also inspired by Greg Prince, who measures how the current Mets compare, record-wise, to previous teams through the same point in the season.

LOPSIDED WINS
The 42-point margin of victory marked only the sixth time the Dutchmen have won a game by at least 40 points at the Division I level. Three have come in the last two seasons. The Dutchmen recorded back-to-back wins by at least 45 points last Dec. 22-28, when they routed Division III Rosemont 107-54 before beating Delaware 91-46.

THEY’RE GONNA SCORE TONIGHT
The 111 points by the Dutchmen are the most the program has scored in the shot clock era (1985-present), the third-most in school history and the most since a 115-68 win over Delaware during the 1954-55 season. It was the fourth time Hofstra has scored at least 110 points in a game.

SO WHO HAS A DOUBLE-DIGIT SCORING STREAK NOW?
Justin Wright-Foreman, as you may or may not recall, ended his Hofstra career by scoring in double figures in each of his last 88 games. With his graduation, the longest streak of double-digit scoring efforts now belongs to Jalen Ray, who scored in double digits for the fifth straight time Friday. Desure Buie’s streak was snapped at four games when he finished with four points.

HALF A HUNDRED IN A HALF
The Dutchmen carried a 60-34 lead into the half on Friday. It was the second-highest scoring half under Joe Mihalich behind a 62-point first half against Rosemont last Dec. 22. The Dutchmen also scored 51 points in the second half Friday and have now scored at least 50 points in a half three times this season and 29 times under Mihalich.

A PRETTY WHOLE HALF
The Dutchmen’s 26-point halftime lead Friday was their fifth-largest of the Joe Mihalich era and their largest since…six days earlier, when they led Monmouth 51-24 at the half.

THIS ONE GOES TO ELEVEN(TH PLACE)
Eli Pemberton, the most recent member of the Hofstra 1,000-point club, jumped two spots on the all-time scoring list Friday, when his eight points vaulted him past Leroy Allen and Frank Walker into 11th place. Norman Richardson is 236 points away in 10th place, so Pemberton is likely to remain at 11th for some time.

GIVE BUIE A HAND
Desure Buie moved into a tie for seventh place place on the all-time assist list Saturday, when he recorded 11 assists to even Loren Stokes’ total of 377. With his next assist Buie will receive one free groin punch!***

***not enforceable in a court of law

WELCOME TO THE ALL-TIME SCORING LIST (which I’m going to try to figure out this year)
Redshirt freshman Hal Hughes scored his first Hofstra points when he hit a layup with 1:15 left. He is the 96th player to score for Hofstra in the CAA era and the 130th to do so in the Defiantly Dutch era. (As you can see, the all-time scoring list is in the process of being built) Hughes, Dan Steinberg and Ian Kelly are the only players in the DD era to score exactly two points.

JWF UPDATE
Justin Wright-Foreman is off to a fast start with the Salt Lake City Stars, the G-League affiliate of the Utah Jazz. Wright-Foreman entered today averaging 21.3 ppg, tied for 17th-most in the league. He didn’t play last night, when the Stars beat Sioux Falls, 111-99. The Stars are 3-2 and are scheduled to play their next game Sunday against the Austin Spurs.

ON THE ROAD AGAIN…AND AGAIN…AND AGAIN
The Dutchmen embark upon one of their longest road trips in memory tonight. The clash against UCLA marks the first game of a six-game trek in which the Dutchmen will play two more games in California — against Cal-State Fullerton on Sunday and San Diego next Wednesday — before coming home for a couple days and then heading to Florida to play in the Boca Raton Classic Dec. 1-2. Five days later, the Dutchmen visit St. Bonaventure.

The Dutchmen actually played seven straight games away from the Arena just two seasons ago — a span that included the “home” game against Manhattan at Adelphi— but the furthest they traveled between Dec. 6 and Jan. 2 was to William & Mary. The three consecutive games in California will mark the Dutchmen’s longest non-New York State road trip since they played three straight games in Florida in January 1975. The Dutchmen played two consecutive games in California in December 1989, when they lost to Long Beach State and Fresno State Dec. 28-30.

UCLA AND THE PAC-12
UCLA, under first-year head coach Mick Cronin, is 4-0 after beating Southern Utah, 76-61, on Monday. The Bruins were picked to finish eighth in the Pac-12 preseason poll. Junior guard Chris Smith leads the Bruins in scoring at 15.5 ppg and ranks second in rebounding with 6.0 rpg. Sophomore forward Jalen Hill is second in scoring (13.0 ppg) and first in rebounding (8.3 rpg).

The Dutchmen and Bruins have two common foes this season. San Jose State, which beat the Dutchmen 79-71 in the season opener will visit UCLA Dec. 1. The Dutchmen’s  next opponent, Cal-State Fullerton, will head to UCLA Dec. 28.

The Dutchmen are 0-4 all-time against current Pac-12 members. Tonight marks the first game against a Pac-12 foe since Nov. 16, 2011, when the Dutchmen lost to Oregon State and Barack Obama’s brother-in-law, 82-72.

Hofstra is 2-8 all-time in all sports against UCLA. Both wins were recorded by the softball team, including Hofstra’s first-ever win over a no. 1 team in 2000, when the Flying Dutchwomen beat the Bruins, 8-5.

At KenPom.com this morning, Hofstra is ranked 154th while UCLA is ranked 95th.KenPom.com predicts a 76-68 win for the Bruins. Per the wise guys in Vegas, for entertainment purposes only, the Dutchmen are 14.5-point underdogs. The Dutchmen are 1-2 against the spread this season.

THINGS YOU CAN SHOUT ON TWITTER IF CALLS GO DO NOT GO HOFSTRA’S WAY
John Wooden bias! (The legendary coach led UCLA to 10 national championships including seven in a row from 1967-1973)
Sam Gilbert bias! (Of course Wooden’s legacy is a little more complicated than many would like you to believe)
Francis Ford Coppola is our alum too bias! (The Academy Award-winning director started college at Hofstra but finished at UCLA)
Bill Walton bias! (Duh)
Pauley Pavillion bias!
Todd Zeile bias! (The all-time Mets good guy played at UCLA)
Posted by Jerry Beach at 8:34 PM