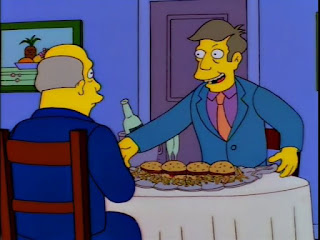 Al Skinner prepares a postgame feast of steamed hams for Joe Mihalich and the Dutchmen.

The Flying Dutchmen continued the win one-lose one pattern Wednesday night, when they raced out to a 20-point lead against Siena before hanging on for a 94-86 win, The Dutchmen will look to mount their first winning streak of the season this afternoon, when they visit Kennesaw State. Here’s a look back at the win over the Indians, err, Saints and a look ahead to the Owls.

THE MOST RECENT GAME SUMMARIZED IN ONE PARAGRAPH
Can you casually score 28 points? Asking for Justin Wright-Foreman, who nearly authored another 30-point effort in seamless fashion as the Dutchmen held off a late rally by Siena. Wright-Foreman was 12-of-19 from the field, including 2-of-5 from 3-point land, and hit both his free throws. His penultimate basket extended the Dutchmen’s lead to 20 at 77-57 with 8:10 to go before Siena went on an 18-4 run to pull within *does the math* 81-75 with 3:11 left. The Saints had a chance to cut the gap to three points, but Seymour Sloan missed an open 3-pointer with 2:33 left. Sloan’s 3-pointer with 1:15 left pulled the Saints within five, but the Dutchmen hit their next nine free throws to put the game away. Eli Pemberton had 19 points, including seven of the Dutchmen’s first nine in the first half and 10 points in the first eight minutes of the second half. Tareq Coburn (12 points, 14 rebounds) produced his first Hofstra double-double in just 20 minutes while Desure Buie added 13 points. Dan Dwyer had nine points and seven rebounds in 28 minutes.

WAS THIS A UNICORN SCORE?
No! But the most recent one happened almost 40 years ago. This was Hofstra’s first 94-86 win since the Flying Dutchmen who were really known as the Flying Dutchmen back then, beat Long Island University at the PFC on Feb. 10, 1979. I definitely didn’t know what a Hofstra was back then.

THE BEST THINGS IN LIFE ARE FREE (which unfortunately was released in 1992)
It’s early, but you’re not wrong if you’re thinking you’ve never seen a Dutchmen team shoot free throws this well. The Dutchmen enter today ranked second in the country in free throw percentage at 81.2 percent. They rank behind only Incarnate Word, which is hitting free throws at a 82.1 percent clip. At this rate, the Dutchmen would shatter the program record for free throw percentage set by the 2010-11 team, which drained 76.1 percent of its free throws.

Last year’s team shot 68.2 percent from the free throw line. But subtracting Rokas Gustys’ performance (45-of-120, 37.5 percent), the Dutchmen would have shot 74.7 percent, which would have been the third-best single-season mark in program history.

ELI MOVES IN ON THE 1K CLUB
With his 19 points Wednesday night, Eli Pemberton moved on to the doorstep of joining the Hofstra 1,000-point club. Pemberton has 995 points and needs *does the math* five points this afternoon to reach 1,000. He is aiming to become the 37th player at Hofstra to score at least 1,000 points.

ALL BY HIMSELF
With his 28 points Wednesday night, Justin Wright-Foreman extended his streak of double-digit scoring efforts to 60 straight games, the most by a Hofstra player since 1989-90 (as far back as my records go, at least at home). In addition, Wright-Foreman’s streak is now the second-longest active streak in Division I, per Hofstra SID Stephen Gorchov.

JWF IS A TOP TEN HIT
With his 28 points Saturday, Justin Wright-Foreman remained in 10th place on the all-time Hofstra scoring list. To be fair, he needed to score 104 more points to move up the list and pass Norman Richardson for ninth place.

COBURN JOINS THE DOUBLE-DOUBLE CLUB
Sophomore Tareq Coburn set career highs Wednesday night by scoring 12 points and pulling down 14 rebounds. It was his first double-double, including his freshman season at St. Bonaventure, and the second points/rebounds double-double of the season for the Dutchmen. Eli Pemberton had 19 points and 12 rebounds against Marshall on Nov. 11.

OVER THE AIR
This afternoon’s game will be aired live on ESPN+. Hofstra will offer live audio here and Kennesaw State will offer live stats here.
KENNESAW STATE AND THE ATLANTIC SUN
Kennesaw State, under fourth-year head coach Al Skinner, is 1-7 this season following its seventh straight loss, an 84-51 defeat at the hands of Georgia on Tuesday. The Owls were picked to finish seventh in the nine-team Atlantic Sun in both the coaches and writers preseason polls.
Junior guard Tyler Hooker (18.5 ppg) is the lone Owls player averaging in double figures. Hooker is also pulling down 4.1 rebounds per game and leads the Owls with 1.9 assists per game.

The Dutchmen and Owls have one mutual foe this season. Kennesaw State visits Elon on Dec. 18.

Skinner is 1-2 against Hofstra in a head coaching career that dates back to 1988. His Rhode Island teams split two meetings with the Dutchmen during the 1992-93 and 1993-94 seasons.

THINGS YOU CAN SHOUT ON TWITTER IF CALLS GO DO NOT GO HOFSTRA’S WAY
You still have I-AA football bias! (The Owls are getting some publicity by hosting a I-AA playoff game against Wofford at the same time as the basketball game)
Steamed hams bias! (It’s a Simpsons reference and you should get it)
Willie Harris bias! (The former utilityman, who spent a season with the Mets, played at Kennesaw State)