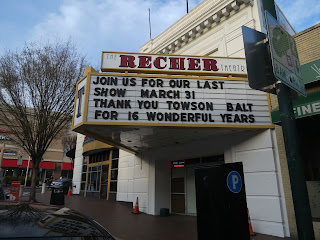 Good place to see a show back in the day.


The Flying Dutchmen pulled off one of the most stunning comebacks in program history Saturday night, when they overcame a 10-point deficit by scoring 12 unanswered points in the final minute of a 79-77 win over Drexel at the Arena. The Dutchmen will look to extend their winning streak to three games — and continue their pursuit of a first-round bye in the CAA Tournament — tonight, when they visit yet another ECC rival, Towson. Here’s a quick look back at the win over the Dragons and a look ahead to the Tigers.

THAT COMEBACK LOOKED FAMILIAR (sorta)
While the 10-point comeback in the final minute may have been unprecedented, it was the second time in the CAA era that the Dutchmen have come back from a big late deficit to stun Drexel. On Jan. 28, 2006, the Dutchmen overcame a six-point deficit in the final 30 seconds of overtime to beat the Dragons, 76-75, in Philadelphia. Antoine Agudio hit a free throw with 25 seconds left to begin the comeback. Carlos Rivera drained a 3-pointer seven seconds later to pull the Dutchmen within 75-73. After a turnover by Drexel, Rivera was fouled with six seconds left, after which Drexel was immediately assessed a technical foul. Rivera hit three of five free throws and future Wagner head coach Bashir Mason missed a 3-pointer at the buzzer.

DO THAT DOUBLE-DIGIT COMEBACK AGAIN
The Dutchmen came back from a deficit of at least 10 points for the second straight game, the third time this season and the 12th time in four seasons under Joe Mihalich. The Dutchmen trailed Delaware by 14 points in the first half last Thursday and trailed Coppin State by 11 points in the first half of a 74-72 win in the season opener on Nov. 11.

THE RACE FOR THE LAST BYE
The Dutchmen are still facing an uphill climb to get out of “Pillowfight Friday,” but their two wins last week give them a chance to finish in the top six and earn a first-round bye. Here are the bottom half of the CAA standings entering tonight.

In addition, Drexel is technically the ninth seed at the moment by virtue of its head-to-head win over Delaware.

(LESS) DEPLETED DUTCHMEN
Junior forward Rokas Gustys missed his third straight game with an undisclosed injury. Only Greer, Hunter Sabety, Deron Powers and Justin Wright-Foreman have played in every game this season. The The longest consecutive games streak belongs to Wright-Foreman, who has played in the Dutchmen’s last 40 games.

WRIGHT-FOREMAN’S SOPHOMORE SURGE
Sophomore guard Justin Wright-Foreman tied for the team lead Saturday, when he scored 20 points. It was the fifth straight game in which Wright-Foreman has at least shared the team lead in points, the seventh time he has done so during CAA play and the 10th time overall this season.
Wright-Foreman has played at least 10 minutes in every game but one this season and has scored in double figures in 18 of 24 games. He scored more than four points and played more than 10 points in just one game last season, when he collected nine points in 17 minutes against Division II Molloy.

Wright-Foreman, who scored 44 points in 27 games last season, has scored 397 points this season, the most in the CAA era for a Hofstra sophomore who scored fewer than 100 points as a freshman.

OVER THE AIR
Hofstra will provide a video and radio feed of today’s game at the Pride Productions hub.

SCOUTING TOWSON
The Tigers, under sixth-year head coach Pat Skerry, are 15-10 this season and 7-5 in CAA play. Towson has won seven of eight since an 0-4 start in the CAA and came back from a 16-point second half deficit on Saturday to edge William & Mary, 80-78.

The Dutchmen and Tigers had one mutual foe during non-league play. The Dutchmen routed SUNY-Stony Brook, 96-58, while Towson had a similarly easy time in beating the Patriots 88-63.

The Tigers won the first game this season between the rivals on Jan. 19, when they overcame a 16-point first half deficit to earn an 86-80 win at the Arena. Towson is looking to sweep the season series for the first time since the 2013-14 season.

In CAA play, the Dutchmen and Tigers have each lost once apiece to UNC Wilmington and James Madison and have each swept Delaware and beaten Drexel once. The Dutchmen beat Northeastern, which split the season series with Towson, and were swept by Elon, which won the lone meeting so far with Towson. The Tigers have split with College of Charleston and William & Mary, each of whom won their lone meetings so far with the Dutchmen.

Per the wise guys in Vegas, for entertainment purposes only, the Tigers are 4-point favorites.

The Dutchmen rank third among CAA teams in scoring (77.7 ppg) but are allowing 77.3 ppg, the second-most in the league.

The Tigers rank sixth in the CAA in scoring (74.0 ppg) and are allowing 69.5 ppg, which ranks third.

ALL-TIME VS. TOWSON
Hofstra is 39-25 against Towson in a series that began during the 1982-83 season, when both schools were in the East Coast Conference. Hofstra and Towson opposed one another in the ECC and the North Atlantic Conference/America East before moving together to the CAA for the 2001-02 school year. Hofstra has faced only three opponents as often as it’s faced Towson: Longtime conference rivals Delaware and Drexel as well as Manhattan, which Hofstra played for the 63rd time in November.

Towson’s 86-80 win over the Dutchmen on Jan. 19 snapped Hofstra’s three-game winning streak in the series. The Tigers are seeking their first sweep of the Dutchmen since the 2012-13 season.

THE PARALLEL UNIVERSE ECC RACE
Tonight’s game marks the Dutchmen’s final regular season game against a former ECC rival. The Dutchmen must win in order to keep alive their hopes of sharing the regular season crown in their parallel universe conference.

There are two ECC games left after tonight. Towson visits Drexel on Saturday while Delaware hosts Drexel next Thursday.

REPLACING THE MISSING SCORING—AND THEN SOME
The Dutchmen lost a whopping 50.3 ppg from last year’s squad via the graduations of Juan’ya Green (17.8 ppg), Ameen Tanksley 15.9 ppg), Denton Koon (11.4 ppg) and Malik Nichols (5.2 ppg). But they have “found” 56.4 ppg this season via five players who didn’t play for the team in 2015-16, plus the emergence of sophomore Justin Wright-Foreman.

PEMBERTON HITS THE TOP 10
Eli Pemberton, who was the first Hofstra freshman since Antoine Agudio (2004-05) to open his career by scoring in double digits in his first five games, is already the 19th Dutchmen freshman in the CAA era to score at least 100 points in his debut season. With 16 points on Saturday, Pemberton moved past teammate Jamall Robinson into sixth place on the CAA-era freshman scoring list. He is seven points away from moving past Chaz Williams into fifth place.

THINGS YOU CAN SHOUT ON TWITTER IF CALLS GO DO NOT GO HOFSTRA’S WAY
SR-71 bias! (The band responsible for the great “Now You See Inside” album hails from Baltimore)
Recher Theatre bias! (I saw SR-71 there in 2004)
Buck Showalter shoulda brought in Zach Britton bias! (c’mon folks know your 2016 baseball playoffs)
The Wire bias! (It’s one of those shows everyone likes but I’ve never seen)
Posted by Jerry Beach at 5:56 PM