In which I request your help to save The Chronicle's office 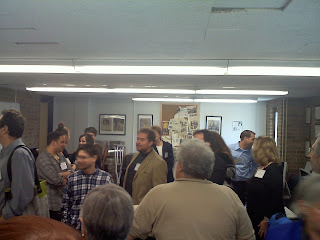 Despite what has turned into my annual springtime silence here at Defiantly Dutch, there are no shortage of interesting Hofstra-related sports topics to cover. And in the days and weeks to come, I will—I swear—write about the baseball team enjoying its most successful season ever, the softball team returning to its usual level of ruthless dominance, the search for a new athletic director and, of course, the ever-fluid future of the CAA (Today: EVERYTHING IS GREAT! Who knows how things will be tomorrow, though)

But today is for a cause even more important to me than Hofstra sports. I am writing to express my support for Hofstra's student newspaper, The Chronicle, as it tries to remain in its long-time office in the Student Center. Hofstra's Student Government Association has proposed a realignment of the second floor offices in the Student Center, including moving The Chronicle about 20 feet down the hall into a much smaller space that is currently occupied by the Nonsense humor magazine, and will meet to vote on the issue Tuesday at 6 p.m.

Such administrative issues between SGA and The Chronicle might not seem even tangentially related to Hofstra sports, yet without The Chronicle there would be no Defiantly Dutch (go ahead, Mason fans, have your fun).

The Chronicle is as old as Hofstra itself, and while nobody can say for sure if the office is similarly aged, nobody can remember when the newspaper was housed anywhere else. Room 203 in the Student Center has been the home of hundreds of student journalists who spent more time there than in our dorm rooms—or in classrooms for that matter—and learned priceless lessons that no amount of tuition could ever buy and no amount of communication classes could ever teach.

We laughed and cried, fought and made up, flirted and fell in love, screwed up and earned the admiration of our peers, sometimes all in the same night. In that office we learned how mutual passions and goals could supersede suspicious first impressions, unite otherwise dissimilar people and create lifelong friendships. 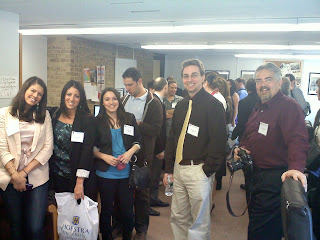 Of course, sometimes it wasn't that complicated. I remember the day 18 years ago this month when I saw a very cute and very pretty news writer walk in wearing a New York Yankees 1961 jacket. Michelle and I will celebrate our 10th wedding anniversary in June and welcome our first child in September. By our count, we are one of four Chronicle marriages from that era while our child will be the third Chronicle baby.

Interpersonal relationships aside, there was something magical about that office, sensed by all who inhabited it even if it was hard to describe. It was equal parts invigorating and humbling to know we were sharing the same office space as those who'd produced The Chronicle decades earlier, and exciting to think of future journalists walking in with wide-eyed wonder before they became the next link in the chain and generated their own memories.

When I think of The Chronicle office, I am reminded of the last—and probably only—pure journalistic enterprise in which any of us would ever participate. We didn't have to worry about "doing more with less" or compromising our coverage because of real world issues such as staff (or lack thereof) and the type of conflicts between business and editorial that we were never told about in a class about journalistic theory. We had all the resources to do the best job we could possibly do.

The office has certainly undergone transformations over the years. When we attended The Chronicle reunion last April, we were excited to see the darkroom (GOOGLE IT) had turned into the library where the paper's archives were stored. The computers were certainly faster and better than anything we could have imagined in the mid-1990s.

We were amazed upon seeing the modernity of the back right corner of the office, which now features two sleek looking couches as well as a wide screen flat TV. Back in our day, the office was partially closed off by a file cabinet and contained a perpetually messy desk on which we cropped photos and pasted up that week's paper for delivery to the printer (GOOGLE EVERYTHING) as well a decrepit couch on which many of us slept off Wednesday night layout exhaustion and Friday afternoon hangovers. 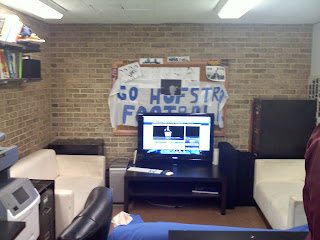 We were disappointed to see the "Tuition Bricks"—at the end of every year, the editor-in-chief would write on a brick the cost per credit to attend Hofstra and place it on a wall to serve as a timeline of the school's skyrocketing tuition—had disappeared over time, but thrilled to see plaques and certificates honoring the newspaper's achievements through the years hanging around the office. And my heart swelled with (you guessed it) pride as I saw a framed masthead from 1995-96—my year as managing editor—hanging just to the right of the entrance.

The décor was different but it was still The Chronicle office, a place where technology could not change the common experience shared by everyone in the room. Moving to a different—and much smaller—office is unimaginable for a newspaper that not only needs the space provided by Room 203 to produce each issue but for an institution that appreciates its history and continues to rely on it after more than 75 years of publication. 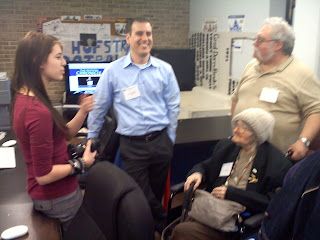 If you ever wrote for The Chronicle or ever read an issue—or even if you've never stepped foot on Hofstra's campus yet value the tradition of a college newspaper—I implore you to write to the Hofstra SGA today at Hofstra.sga@gmail.com and ask them to keep The Chronicle in the only home any of us have ever known. Email addresses for each member of the SGA can be found here. Also send your letters to former Chronicle editor Lisa DiCarlucci (l.dicarlucci@gmail.com) and express your support for The Chronicle at the Facebook page she has started for this cause. On behalf of every Chronicle alumni, I thank you.