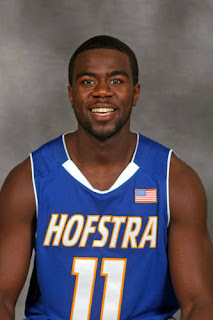 For most of his first year-and-a-half at Hofstra, Dwan McMillan’s Flying Dutchmen career seemed destined to be defined by bad timing. An eye injury he suffered in practice during Christmas week last year ended his season after 11 games, which was a game or two too late for McMillan—who had two years of eligibility after transferring from Indian Hills Junior College—to qualify for a medical redshirt. And with Stevie Mejia eligible this season, McMillan’s time as a starter appeared over.

As it turns out, though, McMillan’s timing this year has been perfect. With Mejia battling a lingering hamstring injury, McMillan has grabbed the starting point guard spot, steadied the Dutchmen and fueled a three-game winning streak that has turned their season around heading into the New Year and the real start of CAA play Monday against VCU.

In addition to playing the point as well as anyone has in the last decade at Hofstra, McMillan has also become the vocal leader the Dutchmen needed in the post-Charles Jenkins Era. He saved his best for the last game of 2011, when he spent all week encouraging teammates before he had 10 assists and handled the Iona press on offense while sparking a ferocious defense that caused 23 turnovers in the Dutchmen’s stunning 83-75 upset of Iona.

The inspired performance seemed to be another instance of appropriate timing, since McMillan suffered his injury just before the Iona game last year. But the calendar, nor the dwindling number of games he has left in a Hofstra uniform, has no bearing on McMillan’s approach.

“It’s always a sense of urgency—there’s urgency in life, period, so I don’t just take this as this is my last year,” McMillan said Thursday night. “I just look at it [as] I’ve just got two months left in my basketball career, but these are going to be my brothers for life, so why not just cherish it and get everything we could out of it right now?”

McMillan began imploring the Dutchmen to do that in the days leading up to the game against Binghamton Dec. 17. The Dutchmen were in the throes of a four-game losing streak and reeling after blowing late leads against Boston University and James Madison and getting routed by Wagner and Manhattan. In a meeting after the Manhattan loss, McMillan implored the Dutchmen to begin snapping out of their funk and preparing for Iona and VCU by treating the Binghamton and Colgate games like they were Iona and VCU.

“It was just gut-check time—look in the mirror—and we could have just gave up,” McMillan said. “I told the guys, Binghamton and Colgate, we’ve got to play those as if they are like Iona and VCU. And for some part of the games, I think we did. We didn’t play the whole 40 minutes [like that] but I think we came out here today and proved to people not only in New York but to the CAA that we are ready to play.”

McMillan has led with actions as well as words. He has 38 points on 13-of-27 shooting in the last three games, during which he has collected 23 assists and committed just nine turnovers while recording six steals and playing all but 14 minutes. McMillan has a 19/6 assist-to-turnover ratio in his last two games, the best two-game mark since Woody Souffrant had an 18/5 ratio Dec. 23-28, 2001.

He was also the one who called the Iona game the Dutchmen’s Super Bowl and told them throughout shoot-around Thursday they would not lose. “A year ago at this time he was done playing—played a few games early and was never really able to get [going],” Mo Cassara said. “He has really embraced being a senior and knowing that this is his last opportunity and he’s really become the vocal leader for the team.”

McMillan said it’s a role in which he thrives. “I think I’m a natural-born leader,” McMillan said. “You’ve just got to do things for the team and get everybody behind you. I just want everybody to play for each other. That’s the only way we’re going to win games.”

McMillan’s leadership could pay dividends down the road for the Dutchmen as well. He said it’s imperative for he and veterans such as Nathaniel Lester, Mike Moore and David Imes to set the tone for the future of the program—freshmen such as Moussa Kone and Jordan Allen as well as transfers Jamal McCoombs-Daniel and Taran Buie.

There’s plenty to do before McMillan hands over the baton, though. While the Dutchmen were picked eighth in the CAA’s preseason poll, McMillan and the rest of his teammates know the conference should be wide-open and unpredictable and are feeling pretty good about themselves after beating the two best teams on their non-conference schedule. So, to paraphrase one of Cassara’s mantras from last season: Why not them?

“[The Cleveland State and Iona] wins do nothing for us if we don’t do anything in the CAA,” McMillan said. “Conference play is the most important thing. If we could get 13 [wins] and do something in the CAA Tournament, we’re looking at a good shot to get an NCAA Tournament [bid]. And that’s our ultimate goal.”

And with that in mind, McMillan wasn’t in much of a mood to celebrate Thursday night—or two nights later on New Year’s Eve, for that matter. “It’s over—it’s over, we’ve got practice tomorrow,” McMillan said. “I’m on [teammates] for tonight. Nobody can go out. We’re not doing nothing. We’re going into our rooms, we’re resting our bodies. It’s time to go.”