A Christmas (present) story of a Jenkins jersey journey 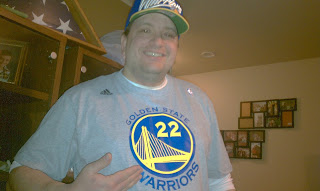 VICTORY!!!!
It’s not every day you go from half-asleep to wondering if you’ll get arrested for theft (that’s not really a theft) in about half an hour. But my unexpectedly adventurous Friday began with a text from Hofstra’s head SID Stephen Gorchov at 2:33 p.m.:
“Jenkins starting tonight”
No first names needed. No punctuation either. Some statements don’t need exclamation points.
My wife got home from work a few minutes later and I told her the good news. Suddenly our Friday night plans had to end with us home and in front of the TV by 10:30. OK, who am I kidding, those were already our end game plans. But still. We were excited.
Then she said “You’ve got to go to Bay Shore!”
Bay Shore is not normally a place someone goes when he or she is excited. Sure, it’s got the Boulton Center theatre and a nice waterfront. But other than that, meh, you know, where we live now is as exciting. Which is to say not at all.
However, Bay Shore was also our former home. More importantly, our old apartment in Bay Shore was where the NBA Store has sent the Charles Jenkins T-shirt my wife ordered for me for Christmas. Twice. Even though we haven’t lived there since October 2006, a few months after I cost us our security deposit by tearing the paint off the walls following The Great Tom O’Connor Screw Job.
How it ended up there—twice, even though my wife corrected the address twice—is a long story I don’t really want to get into right now, since Jenkins is starting tonight and I don’t have a lot of time. But if I wanted to wear the T-shirt tonight, I had to get to Bay Shore pronto, because according to UPS, the second T-shirt was delivered there this morning.
So I got into the car and raced to Bay Shore. I broke the speed limit like usual, but knew “Jenkins starting tonight” would not only get me out of a ticket but earn me a police escort to my old apartment.
Alas, the long arm of the law didn’t interrupt me in my mission, and as I drove on to my old street, “Home Sweet Home” started playing on XM. That’s got to be a good sign, I thought.
I pulled into the complex and held my breath. What would I do if the box wasn’t there? Knock on the door? Introduce myself to the guy or gal who inherited the apartment?
“Hi. You don’t know me, but I used to live here and you have my Charles Jenkins T-shirt. It was mailed here by accident by the NBA—what? Charles Jenkins. Played at Hofstra. CHARLES JENKINS. HOFSTRA. School in Hempstead. On Long Island. Half an hour from here. Why are you reaching into your pocketbook OWWWW MY EYES WHY ARE YOU MACING ME??”
Then again, what would I do if it WAS there? Just run up, grab it, get in the car and peel ass out of there? That wouldn’t look weird or suspicious or criminal at all.
I turned towards our old apartment and gazed towards the corner of our stoop, where packages were always left. I didn’t see it. My heart sank. Damnit. Now I have to knock on…
NO WAIT THERE IT IS!!!
Better yet, the complex was largely empty of cars. The parking spots around our apartment were all open. There was one car idling in the roadway a couple dozen feet away. I pulled into my old spot and sat there for a minute, hoping that car would leave soon and that Joe Blow in My Old Apartment didn’t show up in the interim. “That package there? It’s mine.”
Then I saw a woman from another apartment go out and towards the idling car. That’s it, I thought, this is MY TIME. I pumped myself up by humming the first few bars of “No Easy Way Out.” (Admit it, you don’t know if I’m kidding or not) I opened the door, darted out and up the stairs, noted that the apartment next door still had pumpkins out, grabbed the package, saw my wife’s name on the label and headed back to the car.
Between the time I opened the door and the time I sat back in the driver’s seat, I expected half a dozen neighbors to be yelling at me and the cops to show up and order me from the vehicle. I’d be taken to jail, get Mo Cassara’s voice mail with my one phone call and spend the weekend in solitary after I kept chanting “Jenkins starting tonight.” I’d need various entertainers to take up my cause in order to have any shot at escaping a lifetime in prison.
But absolutely nothing happened. Lady at the car remained at the car. Nobody was looking at me. As usual with Hofstra-related things, I was the only one going nuts. I called my wife and mustered up the most dramatic voice I could.
“I got the package.”

I peeled ass out of there and raced home, feeling like equal parts Jack Bauer, MacGyver and Encyclopedia Brown. A mile or so from the apartment NBA Store refuses to recognize, Howard Jones’ “Things Can Only Get Better” turned up on the radio. For 28 years now I’ve thought that song was lame and saccharine. But this time, with Hofstra 0-3, a Charles Jenkins T-shirt on the seat next to me and Jenkins readying for his first career start, I could only think: Preach on Howard. Wherever you are.