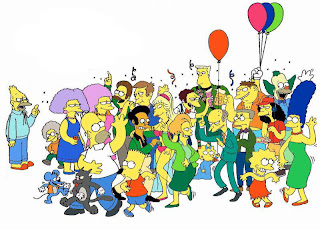 All of Springfield--err, Hempstead--comes out to celebrate the first anniversary of Defiantly Dutch! (It was either this or embed a Wilson Phillips video, and even I'm not that lame...yet)

A year ago today, I was just an unemployed sportswriter with a pirated wireless signal and a dream: To provide the world the combination of Hofstra sports coverage, nostalgia and copious pop culture references I knew it so sorely needed.

Now, I am still an unemployed sportswriter. But I have my own wireless (thanks neighbor, for the unsolicited usage of your signal for so long!) and the dream is, as Wilson Phillips so memorably sang in the summer of 1991, still alive.

How does a blogger celebrate his first anniversary? Well, the traditional gift for a first wedding anniversary is paper and the happy couple typically eats a piece of frozen wedding cake. So I think I’ll go buy myself a new notebook and eat the really old Chinese food in the back of the fridge tonight.

A lot has happened in the first year of Defiantly Dutch, a whole bunch of it not good. But I prefer to think of the positives and particularly how the blog has exceeded my wildest expectations thus far.

I knew this would be fun, but I’ve enjoyed it much more than even I thought possible. Years of covering professional sports conditioned me to believe I’d meet huge resistance at Hofstra when I wanted to occasionally complement my recliner rantings with an actual interview or two, but the administration and the athletes and the coaches have been incredibly welcoming.

Covering and writing about Hofstra sports and getting to know the student media has made me feel young again, even if I realize that WRHU’s Mike “Clay Buchholz” Leslie and Christian Heimall were four when I enrolled at Hofstra. Boy that’s depressing.

I never would have started this blog if Michael Litos hadn’t inspired me to do so with his awesome blogging of CAA hoops, so to get a “go get ‘em” note from him after the first month or so was quite invigorating. I had no idea it’d just be the beginning of our correspondence and our friendship. It’s not very often in life, and particularly this business, that you get to meet (if only virtually thus far) the folks who move you into action, and even less frequently that you are befriended by them and find out they’re supportive and welcoming and all-around good guys. Now I’m part of his grand experiment at CAAHoops.com, which is a tremendous honor and something you should really check out as soon as possible.

I entered this with minimal expectations about the demand for a blog about Hofstra sports. I mean, if there was an insatiable thirst for this stuff, someone would have beaten me to the punch sometime in the last 10 years, right?

I have learned the last 365 days that the audience for Hofstra sports may not be a vast one, but it is a loyal, hardy and hungry bunch that roots for the Flying Dutchmen, and it wants the type of analysis and coverage the local media either cannot or will not provide.

I said it a year ago: There are a lot of interesting stories to be told out there and no one telling them. Well, this year, that changes. Climb aboard The Blue Beetle and enjoy the ride with us, won’t you?