Oh yeah. One hundred and seventy-one days until the Flying Dutchmen wipe the smile off the beak!

So imagine Mom and Dad come to you on July 8 and tell you that they’ve heard there’s going to be a brand spanking new video game system that is like Nintendo plus Sega plus Atari, except 150 times better, and that as long as it comes out before Christmas they’re going to get it for you. You’d be looking at the calendar and wondering what to do with yourself for the next 171 days, wouldn’t you?

I mean, once you’ve gotten a glimpse of the future, it’s kind of tough to go back to that Intellivision, with its clunky controllers (I’ve got a great idea! Put the most important buttons ON THE SIDES!!) and even clunkier overlays. All the cool kids had Atari. Nobody ever wanted to hear about the awesome graphics on the Intellivision or how Mattel had the rights to NFL Football or Major League Baseball. Nobody ever come over to play Pac-Man knockoff Lock ‘N Chase or Space Invaders knockoff Space Armada. They wanted to play the so-called real things on Atari, despite graphics that looked like they were designed by an eight-year-old with absolutely no artistic skill. 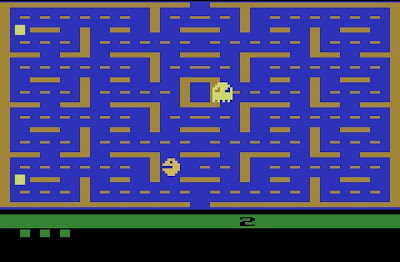 Seriously, we used to have to play this crap.

Where was I? Oh yeah. We’re approximately 171 days away from the Flying Dutchmen almost surely opening the 2009-10 season at the University of Kansas. You know…Kansas. Rock Chalk Jayhawk. Likely 2009-10 preseason no. 1. 2008 national champions. Danny Manning and the Miracles. Alma mater of the dude who invented basketball.

Sure, there’s a couple qualifiers in the above graph, but athletic director Jack Hayes appeared on WRHU’s The Locker Room last night and said an agreement to play the game “…is pretty close.

“I think if you went to a lot of basketball fans and said what are the five places you’d want to see a game, Allen Fieldhouse is going to be on most people’s list,” Hayes said. “[Kansas] certainly has an unbelievable tradition of success coming off a national championship a couple years ago. This will be a test for us, but these are the kind of tests and the kind of situations that we want to put our team in.”

I know you liked opening the season against the likes of Clemson, Holy Cross, Charlotte and Florida International, but, well, they’re kinda like tube socks and slacks and polo shirts, aren’t they? Necessities, sure, but nobody ever hustles downstairs Christmas morning to rip the wrapping paper off those gifts.

But Kansas? Kansas? I’m not saying I’m bouncing off the walls in anticipation of Christmas Day—err, Nov. 15, at least if Kansas opens its season on the third Sunday of November like it did last year—but I just looked at Expedia and a round-trip flight to Kansas City from one of the New York-area airports is a little over $500. That’s a small price to pay to watch the Flying Dutchmen knock off the top-ranked team in the country! Then we’ll be no. 1! That’s how these things work, right? Unless Tom O’Connor has a vote, of course.

And really, why should Hofstra be intimidated by Kansas? So “Rock Chalk Jayhawk” rolls off the tongue and Allen Fieldhouse is one of the most legendary venues in the country. I’d rather be unique like Hofstra, which has no chants because most fans refuse to refer to the team by its “official” nickname and plays in a 10-year-old arena best known for looking exactly like the one at Delaware.

The Jayhawk ain’t all that tough. Kate and Willie could probably kick his butt.

Kansas might begin the season no. 1? Pffft. Hofstra’s probably going to be picked to finish in the top four in the CAA. You know what that means, right? A 25 percent chance of winning the post-season tournament!

Sure, the Jayhawks won it all in 2008, but there’s no Supernintendo Chalmers to save them now! And Hofstra hits its free throws! And the Flying Dutchmen won’t miss a buzzer-beater in a postseason elimination game! Wait a minute…

That’s right. Bring it on, Jayhawks.

Of course, I’m just talking out of my backside, much more so than usual. I fully realize Hofstra’s best chance of winning that game probably involves the Kansas starting five being kidnapped and replaced by The Jayhawks, the Minneapolis-based alt-country band who hit it moderately big with “Waiting on the Sun” the year the Flying Dutchmen played an independent schedule (oh yeah, you didn’t see that coming, did you?). The real Jayhawks may be so good and so unstoppable next year that I’ll be curled into the fetal position somewhere in Allen Fieldhouse, sucking my thumb and begging for mercy (or, more likely, kicking a barstool at my local Applebees).

But it’ll be fun getting there. My best friend lives in Lawrence (and, ironically in that it’s not ironic at all, he grew up a Syracuse fan, which meant he was also the target of my barbs the last time Hofstra played a top 10 team) and another good friend is a Kansas grad, so we can all go at it until the two teams finally tip off.

And short of everyone on the roster deciding it likes Kansas so much it would rather play for Division II Pittsburg State than return home, the trip to Lawrence is a no-lose proposition for Hofstra. The school makes a crapload of money for heading to Kansas. The Flying Dutchmen get the experience of playing a top-tier team and do so with a group of players well-equipped for such an opponent and the possibilities that come with it. Keep the game close—or, dear God, win it outright—and it would provide an immeasurable boost for the 2009-10 team as well as the entire program.

If they lose by 35? It’s probably not going to destroy the Dutchmen’s confidence. Could we have said the same thing the previous two years?

“I’m just not sure if coming off 12-18 and losing your all-time leading scorer was the best time to go and play the defending national champions,” Hayes told WRHU. “But in this case, we have a talented group coming back and I think it’ll be a good test for us.”

The big test for the rest of us will be tempering our enthusiasm between now and the day the Flying Dutchmen channel their inner Chaminade. That happened at a Christmas tournament, by the way. The so-called real Christmas, not the one that is now only 171 days away. Are we there yet? I’m tired of my Intellivision.

Email Jerry at defiantlydutch@yahoo.com. And join the Defiantly Dutch group at Facebook today!
Posted by Jerry Beach at 11:24 PM

I'm definitely in favor of playing Kansas at the Phog. It's a win-win, even though we'll almost assuredly lose.

So KU starts the season against Hofstra? That's perfect. I cannot wait to see this. To make it fair, KU ought to spot Hofstra Speedy Claxton, Rich Laurel, Norm Richardson and Bill Thieben. Save the fifth spot in the starting lineup for someone who's actually on the team now.

Less than five months away ... bring it!

p.s. Your blog looks a ton better with a giant Jayhawk at the top of the page.