In which I provide my long-overdue and long-winded take on the CIT bid, or lack thereof (Or: Feel Like A Number) 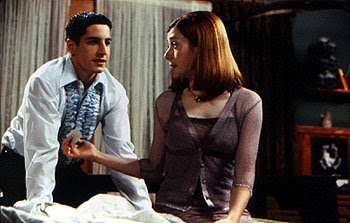 Who knows? Maybe the Flying Dutchmen would have gone all the way with the CIT.

You should have seen the coverage afforded Calhoun’s absence from UConn’s first-round game against Chattanooga (and can you imagine how badly the Huskies would have destroyed the Mocs if Calhoun was healthy?). The late-night news was led by some talking head yapping about Calhoun while standing in front of the UConn medical center…which, you know, was several hundred miles away FROM WHERE CALHOUN WAS HOSPITALIZED.

Then some vapid sports anchor said Calhoun would probably be glad to trade a day in the hospital in exchange for a tournament win. Oh really? The guy’s had cancer three times. I can’t imagine he wanted to kick back in the hospital. And why would someone whose Huskies squads are 14-1 in first-round games feel the need to sacrifice his health for a Round of 64 victory? Sheesh.

You’ll have to forgive me for getting equal parts angry and nostalgic. After all, the day Calhoun was hospitalized was also the day the CAA basketball season ended. VCU lost to UCLA that night in the semifinals of the Jay Wright Invitational.

(Parenthetical tangent: When do you think Jay realized he wasn’t at Hofstra anymore? When he was able to swap disgusting, overly greasy slices of pizza from Campus Pizza for authentic cheese steaks? When he realized his contract had a perk beyond a car? Or when he got two freaking home games to open the NCAA Tournament? Winning 18 in a row and getting a 13 seed must feel like a long, long time ago.)

Anyway, a night before Eric Maynor missed the last shot of his collegiate career (isn’t that ironic, in that it’s not ironic at all), George Mason continued to pay for its 2006 deal with the devil when Penn State hit a miracle shot to force overtime in a first-round NIT game. The Nittany Lions went on to win the game, and then won four more to win the NIT. Haha Mason. Too bad.

So that was it for the CAA in 2008-09. Thanks for playing, drive home safely. Too bad mid-major teams couldn’t participate in a third or fourth tournament. It would be nice if a young, promising squad had another opportunity to play and an opportunity to compete for a championship, no matter how piddly it may appear to others, and some nice hats and T-shirts.

Apparently, there WAS something like that. Multiple somethings like that, even, in which CAA rivals Old Dominion, James Madison and Northeastern participated. Not only that, but ODU won the newer tournament, the CollegeInsider.com Tournament, and got to the championship game by beating JMU in the semis. Northeastern, meanwhile, won a game in the College Basketball Invitational, which is in its second year.

But participating in one of these fledgling tournaments didn’t appeal to Hofstra, even though the team, by any measure, deserved a chance to play in the expanded postseason. The Dutchmen won 21 games (20 against Division I foes). They went 4-2 against the CAA’s CBI/CIT trio (that’s gotta be a record for most acronyms in a single breath). The Dutchmen finished in much stronger fashion (5-2 in their last seven CAA games, including the tourney) than either Northeastern or JMU, both of which went 2-5 over that span.

Yet the decision-makers at Hofstra apparently figured nobody would notice when the Dutchmen “elected” to stay home. When people did notice—the thread on CBI/CIT pairings reached five pages, only the ninth thread to go that long since August 2006, the things I do for you—a letter was sent to Pride Club members explaining that the Dutchmen did not want to play in anything other than the NCAA or NIT. That, in turn, inspired another long thread.

I get turning down a CBI bid. Any tournament that offers a bid and a home game to anyone willing to pony up $60,000 for the right to host, no matter how poor the bidder’s record, is a joke. Of course, Oregon State is in the best-of-three title series (another joke…seriously, single-elimination has been perfect for nearly seven decades, but NOW we need a best-of-three series to determine a champion?), so there you go. Hey, has anyone noted the Beavers’ coach bears an uncanny resemblance to Michelle Obama?

But the CIT was a perfect spot for Hofstra. And let’s be honest: Hofstra turning down a fledgling tournament is a lot like me turning down a reasonably attractive prom date in 1991 because she was the new kid in town.

Sure, there’d be some risk involved. She might have bad teeth and bad breath. She might have a hideous voice and a worse laugh. She might hate various races and religions as well as dentists. I might spend the entire night praying for the clock to move.

You take the chance, and maybe you get smoked in the first round. Or maybe you’re the ones holding aloft the CIT trophy.

And let’s be honest here, too: Who is Hofstra—a program that owns two postseason victories at the Division I level—to turn down the CIT?

Playing in the CIT wasn’t beneath Drake, which reached the NCAA Tournament last year, or Bradley, which has won the NIT four times, reached the NCAA Final Four twice and lost in the finals of the first CBI. It wasn’t beneath Old Dominion, which made the NCAA Tournament twice and the NIT Final Four once between 2005-07, played in last year’s inaugural CBI and was ecstatic to win the CIT.

Maybe Hofstra didn’t feel beneath the tournament at all. Maybe, once again, this was all about the nickels and the dimes.

It cost teams a reported $28,000 to host a CIT game. The administration was probably worried about making back its investment, given the minimal attention paid to the CIT, but couldn’t the school have accepted a road game in the first round and hoped a victory would build a little bit of momentum and interest for a quarterfinal game at the Arena?

Here’s what rankles me when we get to the nickels and the dimes: Men’s basketball is The Sport at Hofstra. (just ahead of men’s lacrosse—oh, and let’s get this out of the way right now: Football fans, I’m actually quite fond of you and the sport and the team, but if you want to insist otherwise, the email address is defiantlydutch@yahoo.com.)

The men’s basketball program makes money. It gets the most press, traditional and otherwise. It performs well on the court and does not embarrass the University off it. It has a coach who embraces his role as a spokesman for the University and is willing to kiss as many babies and conduct as many grip-and-grins as needed in order to spread the gospel.

So it looks bad, for the school as well as the CAA, when the University refuses to participate in a postseason tournament. Men’s basketball sure as hell is not The Sport at Northeastern, where the Huskies play their home games in a hockey arena that looks and feels a lot a 19th-century theatre. Yet the administration there thought enough of the program to send it out west for a pair of games in the CBI and to risk a potential home game if the Huskies got any farther.

I don’t think men’s hoops is The Sport at James Madison, where the football team was ranked no. 1 for most of last season. But the administration recognized the value of rewarding a team that exceeded all expectations by having its best season in a decade

The Flying Dutchmen were one of only seven 20-win teams that failed to participate in a postseason tournament. Only one of those other schools (Wright State of the Horizon) came from a conference ranked above the CAA by Ken Pomeroy. The others came from the Sun Belt, Southland and Big South. Not exactly the company the CAA wants to keep.

Tom Pecora has laughably come under fire for the Dutchmen passing on the CIT. Some fans think the Dutchmen turned the bid down because he wanted to hang on to his analyst gig with CBS College Sports Network. That’s hilarious. You think Pecora’s desire to get some face time on a network nobody gets trumps his competitive desires? He’s got a team that’s primed to peak over the next two years and he’d rather talk about the NCAA Tournament instead of get the Dutchmen some more experience? Please.

Some believe that Pecora hinted during an interview on WRHU that one reason the school turned a bid down was the lackluster performance of the seniors. I haven’t heard the interview so I have no idea if that’s true or not, but even if it is, so what? The CIT wouldn’t be about one more lap around the track for Darren Townes or Arminas Urbutis.

It’d be about getting some more postseason experience for the underclassmen—just like ODU (one senior on its roster), JMU (two seniors) and Northeastern (three seniors) did for their underclassmen-dominated teams and just like Pecora wanted to back in February.

“I think it’s a good thing if you do have a young team, like us,” Pecora told the New York Daily News’ Sean Brennan in early February. “We have a core of three sophomores (Charles Jenkins, Greg Washington and Nathaniel Lester) , so why wouldn’t I want to play more games and get my guys more experience?”

Pecora co-signed that letter to Pride Club members, but don’t kid yourself. He’s a smart man, and he knows there’s no arguing with the bosses when it comes to the nickels and the dimes. This decision came from the top and is a big giant insult—to the players as much as it is to the fans.

Maybe it’s a good life lesson for the players. From here on out, you are nothing more than figures on the bottom line to the people for whom you perform. You can exceed expectations, perform your best at crunch time and still get nothing.

The rest of us are used to feeling like a number. Over the last five years, ticket prices at the Arena have more than doubled. In 2003-04, you could get premium season tickets, the Pride Club discount and membership in the Pride Club for $116. Today, that same trio costs you a cool $246. But you get 25 percent off a maximum of four season tickets with a $100 donation!

Yet the administration that thought nothing of dramatically hiking your ticket prices now doesn’t think it’s worth paying $28,000 to reward you with a postseason tournament game. Too bad. I bet it would have been easier to sell re-seating and another price hike if the Flying Dutchmen actually won the CIT.

Email Jerry at defiantlydutch@yahoo.com. And join the Defiantly Dutch group at Facebook today!
Posted by Jerry Beach at 7:18 AM