Of the dreamer’s disease, Bryan Adams and Sting and long-shot title hopes


Nineteen years ago Wednesday, I accompanied a bunch of my childhood chums from Connecticut to a Bryan Adams concert at Madison Square Garden. It was, if I recall correctly, his only American show of that leg of his tour, so it was a pretty big deal to score these tickets.

The tickets seemed even more valuable once the pre-show buzz began building that Sting—who was playing in the Theatre just downstairs the same night—would show up and perform with Adams the no. 1 hit “All For Love,” the Alpha Male duet (three-et?) that Adams, Sting and Rod Stewart recorded for The Three Musketeers movie the previous fall.

Sure enough, at some point during the encores, out came Sting in all his Tantric glory to team up with Adams for what I believe remains the only time two-thirds of its performers teamed up to sing “All For Love” live. 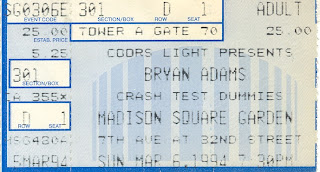 In case Litos thinks I made this up, too.

It was pretty great. It was historic, even. It remains a fond memory for me and the five hometown friends who later crowded into my dorm room.

(At some other time, perhaps, I will explain the whole concept of how, in the year nineteen hundred and ninety-four, Bryan Adams managed to sell out Madison Square Garden and how a bombastic movie theme performed by three staples of album rock radio managed to top the charts more than two years after album rock radio was killed by Nirvana)

And the whole time I was walking Manhattan, listening to Bryan Adams and dividing six people into a double (that’s a math term only Hofstra grads will get), I was wishing I’d spent the day several hundred miles upstate watching something even greater, more historic and more memorable: The final East Coast Conference men’s basketball championship game, which Hofstra won by beating Northeastern Illinois, 88-86, in double overtime in an appropriately empty gym at the University of Buffalo and in front of a national TV audience of dozens on a fledgling, never-gonna-make-it network called ESPN2.

The Flying Dutchmen’s dramatic title-clinching win capped a stunning weekend sweep—Hofstra won three games in three days after winning six games in the season’s first 94 days—while sending Butch van Breda Kolff out a winner and ensuring a lifetime of second-guessing a decision I made pretty easily weeks earlier, when the business manager at The Chronicle, the school newspaper, asked me if I wanted to take an all-expenses-paid trip to Buffalo to cover the tournament.

Being only 20, I had no idea that nobody in the real world would ever pay for me to go anywhere (only expecting me to go everywhere and cover everything on my own dime). Plus, the Dutchmen were about 1-15 at the time and I was still a bit homesick after my sister’s serious car accident the prior October.

The tournament began the same day as Hofstra’s mini-spring break and I wanted to go home for a couple days before heading back for the show. So I declined the offer, and the regret built as the Dutchmen beat Chicago State on Friday and then edged top-seeded Troy State in double overtime on Saturday. I think Hofstra beat Northeastern Illinois during our drive down from Connecticut. How I found this out, I’m not entirely sure. It was 1994, we didn’t have the Internet on our cell phones, or the Internet, or cell phones. All I know is I was immediately bummed out and haven’t stopped kicking myself since.
It was a defining moment in my life, one in which I transformed myself from just another rabid sports fan to an extraordinarily abnormal and lonely one. Every should-I-go-or-shouldn’t-I-go decision is now made with the worry that if I don’t go, I’ll miss something unforgettable and miraculous.

Rarely has that philosophy so dominated my thoughts, nor been more severely tested, than during this most grueling of Hofstra seasons—the worst one for the Flying Dutchmen, in fact, since that 1993-94 campaign.

With bills to pay and a beautiful baby to take care of, getting up and going to a basketball tournament six-plus hours away isn’t nearly as easy now as it was then. It became increasingly clear, as the losses piled up for the Dutchmen, that there’d be no way to justify a trip, even before my wife learned she had parent-teacher conferences on Monday and before she came down with a sinus infection this week.

(Would have been easier to justify the trip if Gary Moore was here to drive me to and fro like last year, but he went and moved to South Carolina for the betterment of his family. Whatevs)

Even the most optimistic of daydreamers has found it tough to muster up a scenario in which the Dutchmen exit Richmond with the automatic bid. The Dutchmen, the seventh seed in a seven-team tournament, have been crippled by the bad judgment “employed” by four idiots and the bad luck suffered by Jamal Coombs-McDaniel and Stephen Nwaukoni. Hofstra went 4-14 in a historically downtrodden CAA, including 1-11 against the other six teams playing in Richmond.

The math is even more imposing than it was 19 years ago. The Dutchmen need to win three games in three days with a depleted squad after winning four games in the previous 110 days.

And have we really stopped to consider the absurdity of the Dutchmen making the NCAA Tournament with a 10-24 record? That would be, by far, the worst record ever for a March Madness entrant.

Yet…yet we allow ourselves to dream, and hope we are equal parts ecstatic and regretful when the Dutchmen are playing for all the marbles on Monday night. We’ve spent the last three-plus months dealing with reality, what’s wrong with a little engaging in a little fantasy this week, and hoping it lasts all weekend?

OF COURSE it’s not likely. OF COURSE the season will likely end tonight, or tomorrow at the latest.

But if ever there was a year for a 10-24 team to take the CAA, this is it. The league is, how shall we put it, not very good. Top-seeded Northeastern just lost to last-place Old Dominion.

And unlike last year, when the Dutchmen were the 11th seed in a 12-team tournament, there are no potential matchups that scream BLOWOUT LOSS. Northeastern and second-seeded Delaware combined to go 4-0 against the Dutchmen, but with a combined margin of victory of just 26 points.

Stevie Mejia is playing out of his mind and is the type of guy who can will a team to jump upon his shoulders. Fellow senior David Imes is playing with a similar ferociousness. Moussa Kone emerged last week, almost overnight, as a potential all-CAA big man.

The Dutchmen are a good defensive team that forces opponents to play their sludgy brand of ball. Sludgy wins at the Richmond Coliseum. If Mejia, Imes and Kone are clicking, all the Dutchmen need is one more guy to contribute offensively to have a real shot. Taran Buie could negate an entire season of ice-cold shooting by ironically (in that it actually WOULD be ironic) finding his stroke in Richmond, which is where jump shots go to die.

All the pressure is on everyone else. Win one game, get some momentum and who knows what can happen?

Plus, the second weekend of March 2013 has some uncanny similarities to the first weekend in March 1994. The CAA probably won’t go the way of the ECC, but this is the smallest and weakest tournament the Dutchmen have participated in since exiting the ECC.

With the usual hometown favorite VCU preparing to head to Brooklyn for the Atlantic 10 tournament, most of this weekend’s games are likely to be played in an empty arena and viewed only by diehard fans whose cable system is big enough to include a fledgling, never-gonna-make-it network called NBC Sports Network.

And—AND—Stephen Gorchov will be there. The one-time men’s basketball student manager, who garnered his 7.5 seconds of fame by hugging Butch van Breda Kolff as a Sports Illustrated photographer captured the moment for all-time (except it never made the magazine), is now the men’s basketball sports information director.

So c’mon Dutchmen. Make me regret this decision. Do it so I can finally say “I told you so” to my wife (another thing I’ve been waiting for since 1994). Do it so that 19 years from now, I’m telling Molly to make the trip to Spokane to watch Hofstra compete in the 38-team America 12 tournament.

Do it for those of us with the dreamers’ disease. If nothing else, do it for Bryan Adams and Sting.

Email Jerry at defiantlydutch@yahoo.com or follow Defiantly Dutch at http://twitter.com/defiantlydutch.
Posted by Jerry Beach at 2:46 PM