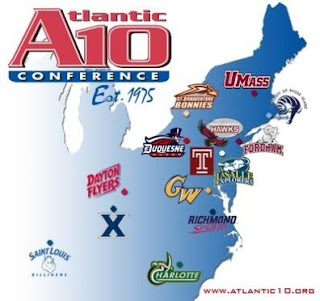 When the dominoes stop falling, odds are good the Atlantic 10 will be Hofstra's new athletic home.

This gives me an alibi five, 10 or 15 Septembers from now, when we’re all sitting around with our robotic overlords waxing poetic about where we were when college basketball as we knew it began changing. Now I can say I was at my laptop writing a piece about how it would impact Hofstra instead of declaring I was watching “Gilmore Girls” on something called a SoapNet, which may actually end up outlasting the current incarnation of the Big East.

Shut up. In the words of Chris Turk: “Mothers and daughters: They speak so fast but they speak so true.”

Anyway, the news Saturday afternoon that Pittsburgh and Syracuse have applied for membership in the Atlantic Coast Conference and that they will be welcomed into the ACC as soon as today is finally the domino for which we’ve been waiting to fall. The inevitable, football-fueled renovation of Division I in which four superconferences lord over everyone else has begun.

There will be a lot of speculation over how the new Division I will look, an exercise in which we will gladly partake very soon, as well as a lot of lamenting over how today represents the end of the innocence for college athletics. There will be none of that here.

Is the college sports landscape changing for the worse? Of course. Is it disappointing that money trumps tradition? Of course. But money has run the world since the dawn of time, so it’s just wasted pixels to wail and moan over how wrong it will be to see Jim Boeheim, who was dourly stalking the sideline at Syracuse before there was even a Big East, in unfamiliar arenas in Durham and Chapel Hill and Miami (snicker snicker snort snort).

And college athletics hasn’t been innocent in decades. The good ol’ black and white days featured point shaving at the Mecca. Sam Gilbert paved the way for the Nevin Shapiros of the world even as John Wooden constructed a dynasty and an impeccable reputation at UCLA. The world has always been impure and it will keep turning. A generation from now someone will bemoan how wrong it is that Syracuse or Pitt left its ACC tradition behind to join the Big 120. Spare me.

Now for the good stuff: How this all shakes out and how, in particular, it impacts Hofstra. What, you thought I cared about the Big East all of a sudden? While most of the talk about the superconferences has been centered on what would happen once the Big XII blew up, for our purposes, we’ve only focused on the Big East and how it would shape Hofstra’s future.

Had the Big East been a proactive force in creating the four superconferences, it would have meant more purgatory for Hofstra. Now that the Big East is about to be picked apart like a Thanksgiving turkey on Black Friday, there’s an endgame resolution in sight that gets Hofstra out of the Southern Bias Conference.

This time though I might be right, because if there’s one thing we can all agree upon, it’s that these conference changes aren’t going to drag out. It took 21 months for Boston College to leave the Big East for the ACC. My guess, with the stakes even higher during this round of realignment, is that Pittsburgh and Syracuse will be in the ACC next fall along with two other schools. The Pac-12 will be the Pac-16, the SEC will also have 16 teams and the Big 10 will be coming up with a new design that subliminally reminds us its names is very, very inaccurate.

The Big East barely had a football pulse with Pitt and Syracuse. It’s possible the league will still try and maintain its BCS standing by poaching a chunk of what is left of the Big XII, but according to my admittedly meager math skills, 64 does not divide equally into five. The ACC just finished off the Big East.

Who knows which of the BCS schools ends up where, but for Hofstra’s purposes, the path to the Atlantic 10—at least from where I sit, where I am, again, just having some fun speculating—just got a lot clearer. Here’s a three-step process that finally gets Hofstra into the conference it has longed after for decades.

1.) The A-10 will be targeted by the non-football Big East schools, which will look to strengthen what will still be one of the best basketball leagues in the country. The following is also an almost perfect alignment because every school but one is a Catholic university:

2.) The current A-10 alignment will take another hit when the CAA finally quits with the Boston-to-Atlanta charade and solidifies itself as a Virginia-based, mid-Atlantic behemoth by taking two A-10 schools—including the school that jumpstarted the whole round of conference realignment that landed Hofstra in the CAA in the first place—and a Southern Conference school. This also further cements the CAA as the best Division I-AA conference in the land.

3.) The Atlantic 10, now down to eight, invites the CAA’s three northern outsiders as well as Boston University, whose long-term home has long been tied to Northeastern’s. This also keeps the Atlantic 10 located ENTIRELY along the Atlantic seaboard—what a concept!—which will be no small consideration as the recession enters its second decade.

ATLANTIC 10
HOFSTRA (CAA)
Drexel (CAA)
Northeastern (CAA)
Boston U. (America East)
Duquesne
Fordham
George Washington
LaSalle
Massachusetts
Rhode Island
St. Bonaventure
Saint Joseph’s
At the very least, this new alignment makes for some juicy immediate rivalries. Imagine getting to see Chaz Williams and Halil Kanacevic at least once a year, or Tom Pecora twice a year. And I’d love to see what the Northeastern student section would come up with to greet Duquesne and ex-NU coach Ron Everhart, who famously took everything to Pittsburgh with him except the bathroom sinks at Matthews Arena.
Of course, there are many wrinkles to this plan. Notre Dame probably ends up in the Big 10 if it decides to give up independence in football. Some of the CAA schools may be lured by the idea of playing lower-level I-A football, which seems like an awful, awful idea if all the power will be consolidated in the four superconferences. But it could happen, which would turn a place like Conference USA into a potential destination for the likes of Old Dominion, James Madison and Georgia State.
The last step—and the only one we care about—is fraught with complications. I doubt very much Fordham has any interest in welcoming Hofstra to the A-10, and in the past the A-10 has been about as interested in Hofstra as the homecoming queen was in me 20-odd years ago.
But the A-10 may be in survival mode in a matter of days and weeks and have no choice but to welcome some new dance partners to the floor. Boston College’s departure to the ACC in 2003 unleashed a torrent of realignment in just a matter of months. By November, the Big East had lured six schools from Conference USA while Charlotte and Saint Louis agreed to leave C-USA for the A-10.
The dominoes are going to fall even quicker this time around. My suggestion, if you’ve been putting off a trip to Richmond for the CAA Tournament, is to book that trip now. Because if I was a betting man—you’ll get that analogy in a second!—I’d wager that by March 2013, there’s a pretty good chance you’ll only have to go to Atlantic City to see Hofstra in its conference tournament.
Email Jerry at defiantlydutch@yahoo.com or follow Defiantly Dutch at http://twitter.com/defiantlydutch.
Posted by Jerry Beach at 5:02 AM

Interesting, but I think Hofstra and Delaware have to be in the same conference and keep that amazing rivalry going.

Interesting, but Temple has a football team, and I am not sure that they would be a school that Villanova would want in the new Big East. Maybe leave them in teh A10, and put Richmond (Small and Private) in the Big East and shift George Washington to the CAA.