Kelleher's brief & circuitous journey leaves him with no regrets 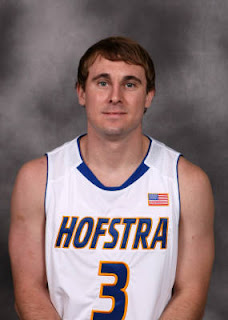 Like Brad Kelleher, Greg Washington was also subjected to the unpredictable whims of the NCAA Clearinghouse and forced to miss what should have been his first season at Hofstra when a seemingly routine paperwork issue turned into a year-long quagmire. But when asked what kind of advice he gave to Kelleher as Kelleher remained on the sidelines, Washington didn’t hesitate to say he thought he wasn’t the one who should provide counsel.

“I think everybody needs to take advice from Brad,” Washington said. “The kid lost a year-and-a-half and he held his head high. He came in, he did his job and he deserves a starting spot.

“I think everybody needs to learn from this guy. He’s one of a kind. To lose a year-and-a-half and still play like he’s been here four years, that’s something special.”

Someday, people will look back at the Kelleher Era and wonder if it really happened or if it’s the product of someone’s wild imagination. Did this native of Australia really transfer to Hofstra after two years at a Texas junior college, sit for his first year-and-a-third because of the NCAA’s nonsensical rulings over his amateurism, finally make his debut well after his 24th birthday, move into the starting lineup almost immediately thereafter and then, just when he was established, complete his eligibility and finish his career having missed more games than he played?

“It’s been a journey, I’ll tell you,” Kelleher said with a smile this week.

Like Washington, who was pegged as a natural replacement for Adrian Uter way back in the fall of 2006, Kelleher’s colorful back story made him a folk hero even before he stepped on the court. Neither Kelleher nor Hofstra were surprised upon learning Kelleher would have to miss some time at the start of his career because he played with professionals—but was not paid to do so—in Australia.

But whereas Miklos Szabo only missed the first two games of his junior season in 2008-09 over a similar infraction, Kelleher’s punishment dragged on…and on…and on. What Kelleher and Hofstra expected to be no more than an eight-game suspension (Kelleher played four games with professionals and the NCAA usually penalizes a player two games for each game he plays with pros) turned into a season plus eight games as the NCAA declined multiple appeals from Hofstra and the CAA and turned down Hofstra’s request to have last season stand as the punishment.

Kelleher’s punishment was, to put it charitably, inconsistent when compared to those handed down to foreign-born players at larger programs who played with professionals in their native countries. But the NCAA kept piling on this year when it didn’t allow an exhibition game against Molloy to count as one of the eight games Kelleher had to miss—even though it allowed Kentucky to count an exhibition game as one of the two games John Wall had to miss at the start of his freshman year.

Wall played AAU ball for an agent, from whom he accepted $800 “in expense money.” The contract Kelleher signed was a one-page document that was nothing more than a permission slip. He wasn’t paid a cent, not even meal money.

“I was like ‘all right, I’m going to miss eight games,’” Kelleher said. “I can accept that. But I never thought it would get blown out to this proportion I only signed a registration form. But it’s the NCAA, they have their rules and you have to respect it. We tried the appeals process and didn’t get anywhere. At the end of the day, that’s what happened. That’s life.”

Kelleher said he spent a lot of time last year venting to his parents over the phone and to his girlfriend, Hofstra volleyball player Nikki Kinnier, but that he was determined to stay focused on his studies and remain positive about the chance to improve in practice every day with the Flying Dutchmen. Tom Pecora’s last night as the Dutchmen’s head coach was at the year-end banquet last March 24, and the most emotional moment of an emotional evening was when assistant David Duke couldn’t stop his voice from breaking as he presented Kelleher the Butch van Breda Kolff Award for team play.

“That award, it’s a prestigious award and I was very gracious and very honored to get it,” Kelleher said. “Coach Duke, he was the only one that came to Australia to recruit me and we had a great relationship. For him to give me that and nearly see him break down, it nearly made me break down at the same time.”

Unfortunately for Kelleher, Pecora’s departure, followed shortly thereafter by Tim Welsh’s unexpected exit, almost overwhelmed him in a way the NCAA’s shenanigans could not. After all he’d been through, the task of trying to win over a new coach and try to beat out a new starting point guard, all in his lone season of play, left him wondering what else could go wrong.

“It was a tough time, especially after the season finished the way it did in the CBI, not going where we wanted to go and then Tom leaving and then everything that happened here,” Kelleher said. “I was just like ‘This is just too much to handle.’ I think I just wanted to go home at that stage and get out of here. But you can’t do that in life.”

Mo Cassara brought in transfer Dwan McMillan, who began the season as the starting point guard and played reasonably well in his first 11 games (6.8 points, 3.3 assists, 2.0 steals per game). Kelleher finally made his debut against Florida Atlantic Dec. 11 but was scoreless from the field in just seven minutes off the bench.

Yet there was one more twist of fate to come for Kelleher, one that finally gave him a chance to be more than a fringe player. McMillan came down with the flu before the Iona game, when Kelleher was 0-for-8 from the field in the Dutchmen’s 87-62 loss, and suffered a fractured eye socket in practice thereafter.

Kelleher has been entrenched as the point guard ever since, and while he’s had his share of hiccups as he’s adjusted to Division I play, he has also been a vital cog in the shockingly successful Dutchmen season. His coast-to-coast drive for a buzzer-beating 3-pointer at the end of the first half of the win over George Mason is the shot of the year, non-Charles Jenkins division, and he jump-started the rallies over James Madison and William & Mary with a 3-pointer and a driving layup along the baseline, respectively.

The Dutchmen are 8-0 when Kelleher hits at least two 3-pointers and 10-1 when he has at least three assists. Overall, Kelleher has put up numbers remarkably close to those produced by McMillan before he was hurt: In 18 starts, Kelleher is averaging 6.7 points, 3.2 assists and just 1.5 turnovers in 28.8 minutes per game.

“He just found a way to hang in there and then ultimately found a way to fit in,” Cassara said. “I think that’s a real credit to him. He had to sit out eight games this year when we were rolling along and had to come in and play due to injuries and had to play a big role. I’m just real proud of his effort and team attitude.”

Kelleher has also endeared himself to teammates (Washington’s family hosted Kelleher at Thanksgiving and Christmas the last two years) and fans alike with a Dustin Pedroia-like moxie, punctuating 3-pointers by placing a gun back in an imaginary holster and eliciting Australian-themed chants from the Lions Den.

“I love it—I love it, I love it,” Kelleher said of the student reaction. “I had one of my best friends from Australia come over in December. I wish he could have been able to hear it because they’ve never seen an atmosphere like that back home. It’s been great.”

And it’s going to end, just as Kelleher is getting warmed up. Barring a home game in the NIT, CIT or CBI, Saturday will be the 10th and final home game for Kelleher. The number of games left overall is almost surely in the single digits as well. But Kelleher, who turns 25 in May, is at peace with his brief and tumultuous Division I career, grateful for the experiences of this season and ready to move on.

“It’s been a life lesson, trying to deal with adversity,” Kelleher said. “But at the same time, I’ve always wanted to play Division I basketball. Obviously had to wait longer than expected, but at the same time, it’s been a great experience with every one of these guys. We’re 18-10 at the moment [as of Monday] and we’re going to do good things this year.”

thats my nephew he's got his mum and dads spirit never give up it will happen one day and look at him now. from your uncle rob love you mate